issues:
After migrating from IE to Edge the users create many support incidents because their download folder is bloated with files that they do not relate to "downloads".
Users have a hard time to purge the folder or find files that they considered as downloaded files.
Especially since these 2 filetypes are actively used and part of workflows (SAP / User Support etc).

Storage Sense does not work on redirected folders. It is also something that is not wanted by the customer :( .

use Citrix Director to access the remote sessions on RDSH (session mirroring) of users
filetype: invite.msrscincident

filetype: invite.msrscincident, IE opened these files automatically and these were stored in Temporary Internet files, not in the Download folder visible to the user. The folder was purged everyday (Citrix Worker restart)

filetype: PDF: Edge does download the files and Edge opens the file in a tab. The PDF remains in the download folder

filetype: invite.msrscincident
should be deleted after opening, as they do expire anyways.

filetype: PDF
there should be an option in Edge to open this filetype without any actual download to the download location (it could be cached to a user temp folder %tmp%).

Open PDF should be seamless in a tab, just like Office Files in Release 93.x

Dear @MissyQ  have you heard about similar scenarios and is this under review? I have not found similar things in your lists. Thank you very much!

@kwester-ebbinghaus-business Hello!  I'm not totally familiar with the scenario you've described but would it work if users are asked what they would like to do with each download?

For example, if you navigate to edge://settings/downloads it is possible to turn on "Ask me what to do with each download."  This will turn on the following Downloads message and selecting "Open" will not save the file in the Downloads folder, rather it will go to a Temp folder. 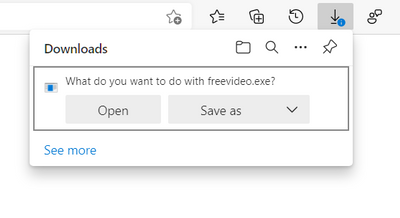 Hi @Kelly_Y this sounds like a solid workaround for the moment. Thank you for the inspiration and quick response.

It would be still nice to triage to have a setting for these filetypes similar to what we do for Office.

I am open for other ideas.

@kwester-ebbinghaus-business Hi!  One more thing, specifically for PDFs we have the AlwaysOpenPdfExternally policy which does mention "If Microsoft Edge is the default PDF reader, PDF files aren't downloaded and will continue to open in Microsoft Edge."  (https://docs.microsoft.com/en-us/deployedge/microsoft-edge-policies#alwaysopenpdfexternally)  Might be helpful in your scenario.

Also, if you haven't had a chance yet, you can also submit feedback through the browser? ("..." menu > Help and feedback > Send feedback)  Thanks!

Thank you Kelly we will try this!
0 Likes
Reply