First published on CloudBlogs on Sep 01, 2016
Unwanted applications such as those preinstalled on some devices can be a cause of concern for customers managing corporate-owned devices. Also, some organizations need to have specific control over which applications can be installed on their devices from public app stores. The August update of Intune brings some important enhancements to app management on iOS 9.3 and Samsung KNOX devices that give you even more control of the apps users can access on their devices.

Hidden and shown apps for iOS 9.3 (or later)

There are two new ways to manage and control which apps your users have access to on their supervised iOS 9.3 or later devices. Now you can use the hidden and shown apps list in the iOS general configuration policy to specify which apps users can view and launch, and which are hidden on their devices. The apps you can specify include both apps you have deployed, and the built-in iOS apps like Messages and Notes. For more details, see iOS policy settings in Microsoft Intune .

The Samsung KNOX improvements also allow you to configure custom policies that let you block or allow specific apps on these devices. 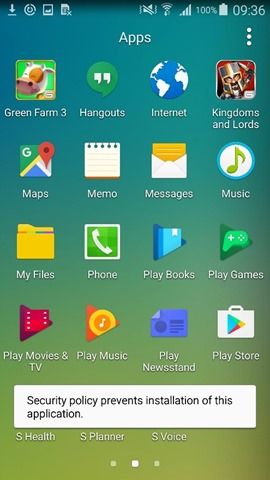 For more details, see Use custom policies to allow and block apps for Samsung KNOX devices . Visit the What’s New in Microsoft Intune page for more on these and other recent developments in Intune.