This is an exciting time for users and tech enthusiasts alike: close on the heels of Windows Server 2012, Windows 8, and Windows Phone 8 announcements, Microsoft announced the Office Customer Preview early last week. If you haven’t read the details, this press release provides a great summary of the new Office.

One of the announcements that will particularly interest readers of this blog is the support for Lync audio and video in virtual machine-based and session-based desktop deployments. You can find more details in the section titled ‘Virtual Desktop Infrastructure Plug-in’ in this TechNet article . The RDV and Lync teams worked over the past year to help enable a seamless, fast, and fluid conferencing experience that works with the new Lync in Windows Server 2012 deployments by using RemoteFX.

Lync 2010 supports a limited set of scenarios when running on a virtual machine-based desktop or a session-based desktop, as outlined in this KB article . This is primarily due to the limitations imposed when audio and video content is rendered on the server side and gets sent remotely to the client over the Remote Desktop Protocol (RDP) as shown in the following diagram. 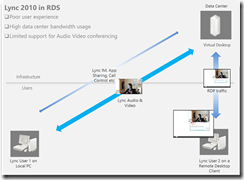 In contrast, the new Lync enables Lync audio and video content to be directly rendered on the client without having to be rendered on the remote desktop first and then sent remotely via RDP. 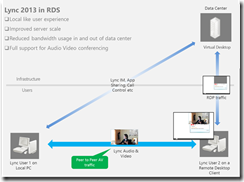 A key part of the new architecture is the RemoteFX Media Redirection API, which allows Voice over IP (VoIP) applications to natively integrate with RemoteFX, and enables transmission and rendering of audio and video content directly on the client side.

Some of the significant advantages of this approach include:

The Lync product group will soon provide specific details about how to deploy and use Lync in Remote Desktop Services (RDS). Until then, try out the Office Customer Preview and let the Office product group know what you think.

If you are a VoIP application developer, for more information see the RemoteFX Media Redirection APIs Reference .

To summarize, the new Lync and RemoteFX help deliver what users really want—a no-compromise, local like experience with their virtual machine-based and session-based desktop deployments.

Thanks for reading and have a good day.