The Configuration Manager team will still release standalone FEP/SCEP hotfixes for major anti-malware platform updates, or include these hotfixes in periodic cumulative updates.

When you deploy the anti-malware platform updates through MU (and the Configuration Manager Software Updates Management (SUM) feature) instead of hotfixes, MU leverages the Windows Update Agent to install the platform update instead of the Endpoint Protection Agent. So, you will lose inbox deployment status monitoring in the FEP/SCEP dashboard. 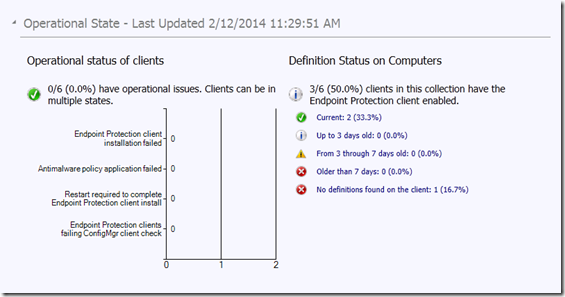 As a workaround, you can use the corresponding SUM compliance report to show the deployment status of the update: 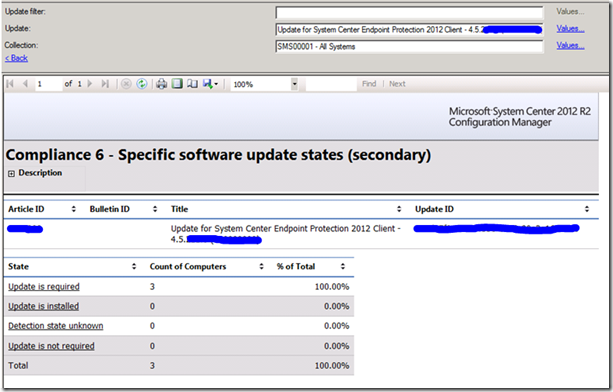 You may sometimes see the update deployment return error code 0x80070643. This error code could indicate that these computers are in a pending reboot state.

Note: If you use SUM and the FEP 2010 hotfix at the same time, you may see a computer placed in the "Out-Of-Date" collection or the "Deployment Pending" collection although it has already been upgraded to the latest update platform. In FEP 2010, the version of the anti-malware platform is determined by that of a specific component.  However the update package shipped on MU will not update that specific component, therefore you will get the incorrect version number of the anti-malware platform and the incorrect collection membership.  If you fall into this situation, you can only use the SUM compliance report mentioned above to check the deployment status of the platform update.

Update: The above issue has been addressed.  Please see http://support.microsoft.com/kb/2975384 for more details.