Project Edison is a Safety Notification and Response Platform that leverages the Internet of Things (IoT) to communicate to a community during emergency events. It’s an open sourced Microsoft 3rd party solution accelerator (3PSA) on Github that was invented by me, became an intrapreneurial start-up project I cofounded with Clark Ennis and upon receiving funding was built by our partner Insight Digital Innovation.

What is the idea behind Edison?

So back in April 2018, two emergency events happened to Sarah Maston, Senior Solution Architect at Microsoft, within the span of a two day period that led to an “A-ha” moment for Sarah.

The first thing that happened is that at my apartment building I saw a lot of smoke and ran in to save my cats. The bells hadn’t come on yet, so I took to the stairs so I didn’t get stuck in the elevator. Running the stairs to the top floor, grabbing some confused cats, running back down.

Now, running into a perceived burning building to save my cats is a topic for a different discussion… but that’s what I did. It turned out to be a false alarm.  My cat Thomas was not amused.

The next day I was at the bar and the head of my building’s security was there. He said that the fire had been out for 20 minutes by the time I saw that smoke and it was as far away as possible but the firepeople had used a fan and blown the smoke across the garage and that is what I saw. I said, “what?!? I could have broken my neck on the stairs… my cats were traumatized… There needs to be a system that has a map and tells me where the fire was and that it was already out!!.” His response was, “You’re the one that makes that stuff.”

Two days later I was in a meeting room in Building 20 on Microsoft campus when the news alert came about the event on YouTube’s campus. I got to thinking. If that had happened on my campus, the Microsoft campus is huge. It’s a whole zip code. I could be safe and all I needed to do was calmly walk outside and get in my car to evacuate the campus. But there was no system in place that would tell me that. Everyone I know would want to text me to ask if I was okay. I would panic and the stress of not knowing where it was would be awful. I historically do very badly with stress. To get information, I’d only have a hashtag to find out what was going on.  I left my meeting with an idea to go back to my desk to draw it. I made a phone call to Clark, “I have an idea. I’m drawing it.” To which he said, “Let’s meet tomorrow.”

Why is it named Project Edison?

When Clark and I first met I showed him my vision. In a simple use case, we can geofence where smart devices are and if we knew were an event had occurred we could light up indicators different colors. In the campus case, if something happened in Building 900 (not a real building) an indicator would light up yellow in Building 20 and that would tell me that something had happened “near me” but that I was safe and to get more instructions. If it turned red, it would mean the emergency was on top of me and I needed to act quickly. It could have a communication hub that security can talk to a community directly and then we wouldn’t need to check social media. We could be told what to do quickly and efficiently. We could be told when it was over. We could hook up different kinds of sensors, e.g., auditory, to turn the indicator red faster than anyone surviving a crisis and then calling 911 to tell them.

Clark said, “An indicator that lights up… do you mean a light bulb?”

And Project Edison was born.

How did you pick the Logo?

We met with the design firm and it was a difficult day to present the idea as the Santa Fe school shooting was in the morning.  But we all dug in. We have a problem to solve and we are going to attempt to help. So the assignment for the logo was, I told them, “Something hopeful.”

They gave us a set of six possible designs that were all pretty wonderful. 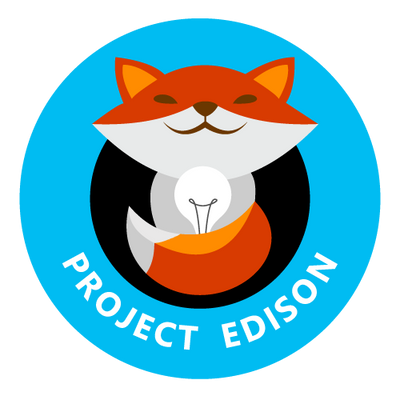 The final logo was picked by my friend’s 8 year old daughter. We named her pick, the fox, Thomas. I was really glad that was the one she liked best! We, the adults over at Microsoft, had all landed on the fox with a group vote too. From some internet researching I learned the fox symbolizes “getting out of dangerous situations using intelligence.” As a kid-developer-in-training, she wears her Project Edison hoodie proudly. #girlsWhoCode

Thomas, serendipitously, is the name of one of my cats I ran in to save.

How did you get it to the world?

Clark and I went through the same process anyone needs to go through if they have an idea they believe in. We created a short four slide pitch deck and started to socialize our idea. There are programs at Microsoft that are used to accelerate our partners ideas and we knew we had a special situation that the idea was coming from inside the house, but that this idea could be given to our partner eco-system to build interesting safety solutions.  In our off-hours we met and created our PoC use case that we started socializing and pitching to our management. We gained support and got good news that it would be funded to be built by one of our partners. We then selected Insight Digital Innovation to build the solution.

How did Microsoft support you to do this?

My role as an IoT Solution Architect is to help our partner eco-system create powerful IoT Solutions on Azure. So when Clark and I created our business plan for our intrapreneurial start up project we had very specific goals around getting this idea out to all our partners to be able to leverage for any security or safety project.  We proposed we could do that by making it a Solution Accelerator.   Clark and I sit on different teams and our management was incredibly supportive. We started this project in our spare time getting more and more support as we socialized it. Sometimes by “cold emailing” different parts of the company to gain insight and opinions, especially from experts in the field of public safety. We have a saying here, “One Microsoft,” and this was definitely brought to life from the support of everyone. It’s a difficult topic to talk about in the US but we found talking about how Project Edison would cut down on stress in an emergency was creating a feeling of hope from everyone we collaborated with.

Upon receiving funding, we and our partner Insight Digital Innovation got to work to design and build out Project Edison. By putting it out on Github, we made that idea available to any partner that wants to use it. Whether for an integration project with various safety systems already in play or integrating into an existing app with the Project Edison API or adding communication to an existing system by leveraging the Project Edison app framework, it’s all out there for them.

Microsoft is extremely supportive of new ideas from everyone that works here. Satya created a week long company hackathon, OneWeek, where some of the most amazing ideas become reality. One of the most important inventions, in my opinion, is the adaptive controller for Xbox that was just released this year. That started as a passion project, just like Project Edison.

What Project Edison based solutions are coming out? How do I get more info?

The first commercial solution that has leveraged Project Edison. ActiveShield by BeSafe Technologies. Mayor Turner was an early supporter of the Project Edison idea. BeSafe has begun an implementation of their new ActiveShield platform with the AISD in the City of Houston. This work has won the IDC Smart Cities North America Smart Buildings Award.

I look forward to the next ideas that Project Edison inspires!

You can find the Edison lite bulb project code and resources at https://github.com/litebulb/ProjectEdison

I would also to try save our Cat Charly ;)