What is the Data Science Virtual Machine 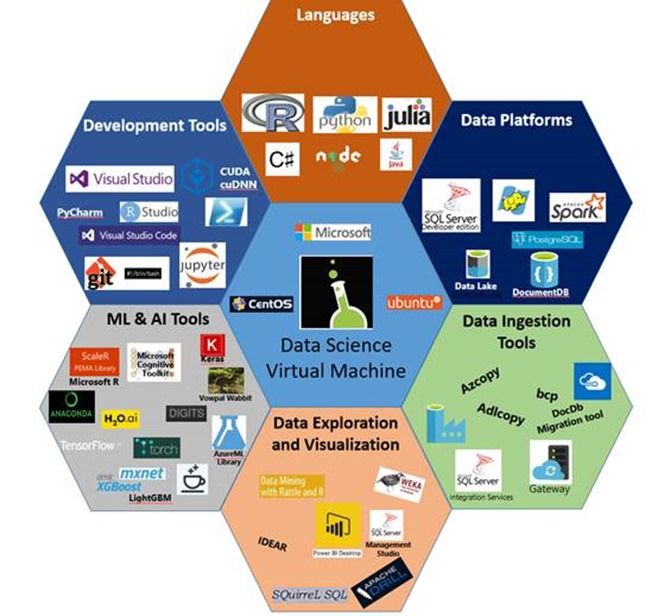 The team have made some major enhancement to the DSVM offering with the Ubuntu version.  We have found from feedback Ubuntu is overwhelmingly the most popular Linux distro among data scientists and academics.

So the team are very excited and happy to now offer Ubuntu as a core Linux DSVM platform with CPU and GPU Images available on the Azure MarketPlace .

The Data Science Virtual Machine family of VM images on Azure includes the DSVM for Windows , a CentOS-based DSVM for Linux , and an Ubuntu-based DSVM for Linux . These images come with popular data science and machine learning tools, including Microsoft R Server Developer Edition, Microsoft R Open, Anaconda Python, Julia, Jupyter notebooks, Visual Studio Code, RStudio, xgboost, and many more. A full list of tools for all editions of the DSVM is available here .

The DSVM has proven popular with many Academic data scientists as it helps them focus on teaching, learning and research and avoid delay due to IT Support and mundane steps around tool installation and configuration. The use of the DSVM has additionally helped many Institutions IT teams as it reduce the amount of support required in lab setup and preparation.

In addition to all the data science tools you love, you now have a choice of deep learning tools  (CNTK, Tensorflow, MxNet, Caffe/Caffe2, Torch, Theano, Keras, NVidia Digits) on the Ubuntu version.

Are now available so you can deploy the same DSVM on a GPU VM (Azure NC-Series) or a CPU-Only VM. You just fall back to using the CPU when running the deep learning tools on CPU-only hardware. NVidia Drivers, CUDA etc are all on the VM image by default. So you can just get started with deep learning in matter of minutes. No need to download the framework source, fight with compiling those tools and installing the dependencies.

Here is a blog post on the new release

The Data Science team have also been working with with Facebook to be among the five partners featured in their announcement of open sourcing their latest deep learning framework called Caffe2 (a rewrite of Caffe) at their F8 conference.

To spin up a Ubuntu DSVM just go to its product page at: http://aka.ms/dsvm/ubuntu and click “Get it now” button.

You can login in to it with SSH client like Putty, SSH command line OR use X2GO for graphical interface. Jupyter/Jupyterhub, RStudio Server are available.

A side by side comparison of tools preinstalled on different editions Windows and Linux of the DSVM can be found here .

So I really look forward to how academica are using this and please do share your usage, support and feedback to help the Data Science team keep improving the DSVM and make it the best analytics development environment anywhere on the cloud. Please send any questions to or feedback to the DSVM forum on MSDN.