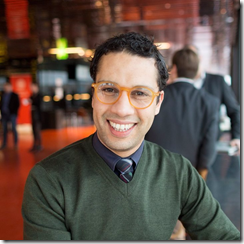 The theme of this first edition was to explore Blockchain and Distributed Ledger Technologies for Clinical Trials.

The event was organized by the Centre for Cryptocurrency Research and Engineering at Imperial College London and co-sponsored by EIT Health, outlier ventures, and Microsoft.

The event extended over three days with speakers including:

- Claudia Pagliari - Programme Director, MSc in Global eHealth at The University of Edinburgh

The challenge: The Current State of Clinical Trials 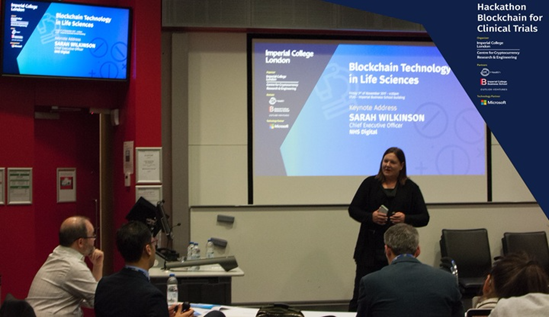 Randomized Clinical Trials are at the core of our modern healthcare system and the backbone of the pharmaceutical research and development industry. They are considered the “gold standard” and represent the most important vehicle by which new therapies including drugs and medical devices are evaluated for effectiveness (benefits) and safety (risks) before being delivered to patients.

However, the current design and the operational organization of clinical trials are increasingly convoluted and a bottleneck for innovation in healthcare and life sciences. Today, the planning and the execution of randomized clinical trials costs millions of pounds and takes years to complete. This might hamper the timely release of potentially effective therapies to the patients who needed the most.

Moreover, despite the increasing expenditure in the development of clinical trials, the number of new drugs and other medical treatments approved is abysmal. The success rate of a drug from the first phase of a clinical trial to approval is around 9.6% with new innovative therapies hitting a low of 6.2%. In the case of Alzheimer and Dementia research, clinical trials over the last two decades have (almost) all failed with an attrition rate of 0%.

It also goes without saying that clinical trials are only effective in supporting medical practice if they are published. In a recent study looking at large randomized clinical trials, 29% of studies were not published and the results in public clinical trial registries such as ClinicalTrials.gov was limited at best. These results reflect the challenges facing healthcare to support innovation and discovery, and to evaluate existing therapies; which has raised many concerns among the scientific community that the current model of clinical trials is excessively complex, expensive, inadequate, and opaque.

The Institute of Medicine in its report “Envisioning a Transformed Clinical Trials Enterprise in the United States” recognizes that a transformation of clinical trials must occur to bridge the gap between the aim to provide evidence-based high-quality care, and the reality where “we have limited ability to generate timely and practical evidence”.

In the course of the last few years, Blockchain and Distributed Ledger Technologies (DLTs) have gained mainstream attention in healthcare. DLTs being the foundation the new digital economy – primarily cryptocurrencies such as Bitcoin and Ethereum – are today proposed as the catalyst of the next digital transformation in healthcare and life sciences. Proponents promise to revolutionize Healthcare by using Blockchain to enable interoperability by design and to replace third-parties and middlemen through a distributed untampered and transparent computer programmes.

While this represents a promising (r)evolution, there isn’t yet proven concepts of DLTs implementation in Healthcare and Life Sciences at scale. Most of the current implementation are focused on the technological aspects of DLTs (i.e. consensus mechanisms, cryptography) and its financial and economic model (e.g. the financial benefit and market for cryptocurrencies) with a dearth of small and limited proof-of-concepts relating to healthcare.

The main highlights of these introspection efforts during the hackathon:

- Eliminating the middle-men in clinical trials, namely CROs:
During the hackathon, all students’ ideas revolved around replacing contract research organizations (CROs) operations using Blockchain technology. CROs are private organizations that act as out-sourcing agencies to pharmaceutical companies. In the last decade, CROs’ scope of activities expanded in both the volume (market share) and range to include all tasks related to conduct the different phases of a clinical trial. Today, CROs cost represent 25% of total spending of clinical trials with an estimated market of 25 billion in 2013 . The two finalists proposed using distributed ledger technology to operate all the transactions necessary between the pharmaceutical companies (the sponsor) and the clinical trial sites using Blockchain. One group used Ethereum Enterprise on Microsoft Azure to create a distributed decentralized clinical trial protocol using “smart contracts” (figure below). 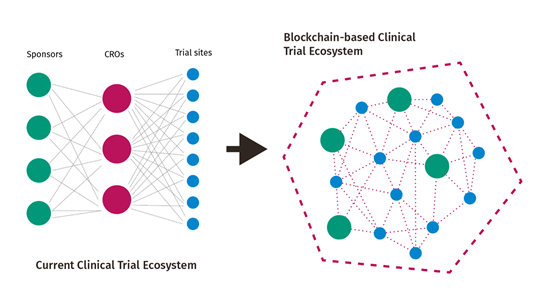 - Value-distribution to patients: this is perhaps the most powerful insight gained from the hackathon. Almost all projects and participants devised “fairer” financial mechanisms for the sponsors (pooled clinical trials), for clinical trial sites, and most importantly for the research subjects (patients). A group of hackers proposed a model in which the trial sites and the patients enrolled in a clinical trial can receive an incremental micro-payment using “Tokens” whenever a specific step in the trial is validated and shared on the Blockchain. Each “validated” transaction e.g. step could be associated with a release of a specific number of tokens (which could have a monetary value) to the entities involved in the transaction, including the patient. Most students have not addressed the risk of “coercion” and “undue inducement” related to such model of incentive; but all judges agreed that this model offers a promising approach to increase enrolment and completion of a trial, one of the major reasons for failure of clinical trails.

The winning team “Smart Trials” composed of Martyn, Tania, Anya and Mikhal have developed a proof-of-concept using Microsoft Azure Ethereum Enterprise to run a decentralized multiparty clinical study. The model is based on translating a clinical trial protocol to a series of “smart contracts” that regulate the collection of data, the management of consent forms, and the payment of fees for activities associated with the study.

We are very grateful to our partners and colleagues who have kindly attended the pitch event. We would like to thank:

You want to get involved?

The Imperial College Centre for Cryptocurrency Research and Engineering (IC3RE) was founded in 2014 with the goal of focusing research efforts into Blockchain and distributed ledger technology at Imperial College London, and training up the next generation of developers, scientists and entrepreneurs in this new area.

Dr Melek Somai is a fellow at Imperial College London and a member of the Centre for Cryptocurrency Research and Engineering where his research is on applying Distributed Ledger Technologies in Healthcare and Life Sciences.