Hello. If anybody has a minute, I have some sites requiring 32-bit IE. in Windows 7, i created a second IE 32-bit shortcut (C:\Program Files (x86)\Internet Explorer\iexplore.exe) and it launched a strictly IE-11, 32-bit.

In Windows 10, the same procedure seems to launch 64-bit, despite the shortcut property to x86. The Task Manager does not indicate any difference between the launched 64-bit and 32-bit instances. Both list iexplore.exe (nothing indicating 32 bit).

I've read stuff about internet Opetions, checking/unchecking Enhanced Protected Mode but that does nothing, and it sounds kind of weird to have to do that anyway.

2. Despite that, I fear its launching 64-bit anyway, despite the path executable. How are you able to set up a 32-bit only IE shortcut as perfomred in Windows 7?

Thank you so much for reading.

Hi,
there is an answer here:
https://answers.microsoft.com/en-us/ie/forum/ie8-windows_other/version-of-ie-32-bit-or-64-bit-how-ca...

@HotCakeX Hi, thank you so much.

yeah, I reviewed both those threads earlier in my massive days long googling but they seem generally inconclusive.

I had IE 11 on Windows 7 and absolutely needed the 32-bit (x86) shortcut, despite these threads saying >= IE 10 determines, on a hyperlnk load basis, the bitness required.

Also, there is no iexplore.exe *32 in Windows 10 process manager, even if launching the x86 executable. So i'm still stuck. I've read the same issues elsewhere but no substantive answers specifically for Windows 10, IE 11.

Um why don't you use Windows 10 32-bit?
0 Likes
Reply
Highlighted 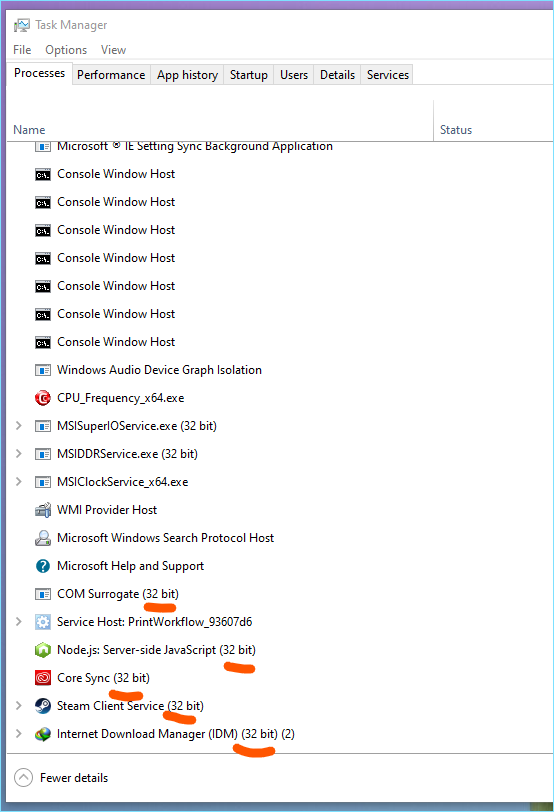 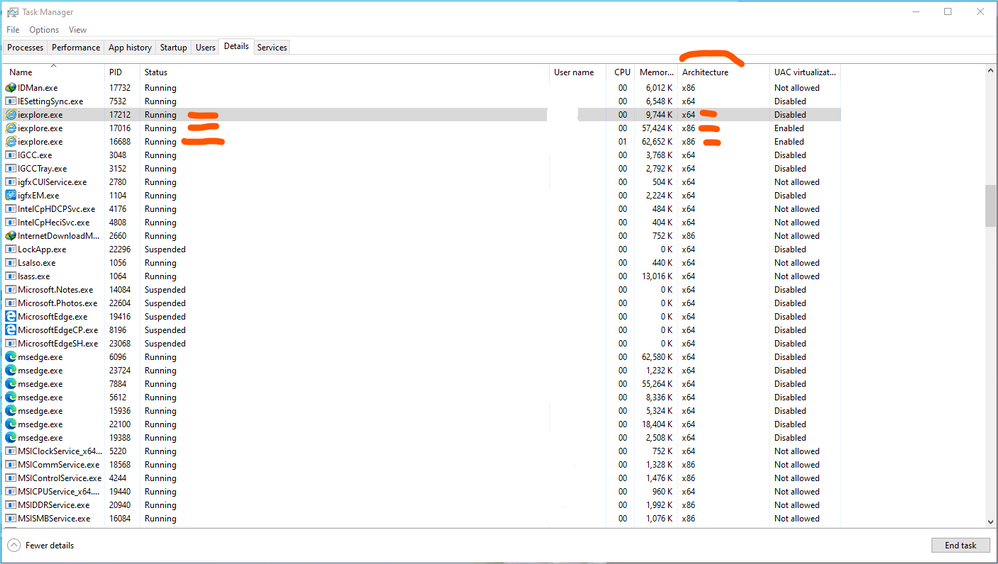 this one in the Details tab of Task manager, I'm not sure whether you have it or not because If i remember correctly it was introduced in Windows Insider build that Im using 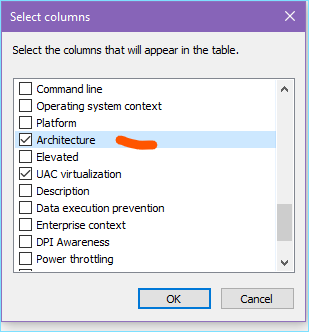 if your web apps are old and only run on 32 bit IE, you have 2 more options

@HotCakeX  Thank you. In the Details tab of Task Manager, naturually I don't have the Architecture column. :) Is there a way to get that to display?

Yes please see the spoiler content above, right-click on that orange circle and choose "select columns". it you don't find it then use the first screenshot above which is from process tab in Task manager, if your program, in this case internet explorer, has a (32 bit) tab next to it then it is 32bit, if it doesn't then it is 64bit.
0 Likes
Reply
Highlighted

ok. Thanks. I couldn't find Architecture but I tried showing platform and it has 32 bt or 64 bit for everything.

My concern is when I do launch the 32-bit IE, it creates two entries, one 64 and one 32, but the 64 is using little memory. I guess it's saying the bulk of the processing is 32-bit but that lingering little 64-bit thing concerns me. It's like piggybacking on the 64-bit for ~something~. I hope it's some kind of shared resource deal and not anything in terms of processor to blow up the app.

I don't have access to the intranet with Win 10 to test it yet, I'm in a preemptive panic.

Oh, which Windows 10 build are you using by the way?
0 Likes
Reply
Highlighted

where would I find that on Win 10?

I was reading stuff where >=IE 10 frame/manager process uses 64-bit, but desktop tabs use 32-bit. I have a creepy feeling I need the former to run at 32-bit as well for this app.

Because I had to create that separate IE 32 bit shortcut in Win 7.

I wish I knew if that "Frame/Manager Process" running in 64 bit has any effect on processing page content. This app has ActiveX, among other things.

But it's still IE 11, and that junk about how it runs seems IE specific. That's the constant between Windows 7 and Windows 10. So would the OS change how IE runs in 32/64 mode?

anyway, unfortunately I don't have much information about that particular aspect of IE in Windows 10, hope others can help you further with your issue :)

I really appreciate your help, it provided a wealth of insight. I'm basically flying blind right now, my Win 10 can't access the apps intranet, while my Win 7 32 bit is how I've worked there.

I'm asking somebody who works with the apps with Win 7 64 bit, IE 11 32-bit to provide a screenshot of her Task Manager. Maybe I can see if IE 11 is running in this little of 64, a lot of 32 manner "successfully" for her.

There are no longer options to setup separate shortcust for 64 abd 32bit IE. You only need to clear "Enable Enchanced protected mode" setting to use IE in 32bit. We do that in our company and we are using 32bit activex controls. So I'm confident that it is 32bit IE :). The same applies to IE Mode in Edge on 64bit systems.

@mindst thank you so much. That is reassuring beyond belief.

Is your company Win 10? My question is what exactly is the default bit state of IE 11?

It's like the default is some middle ground which is 32-bit and has Enable Protected Mode checked? And this can't run 32-bit ActiveX (presumably when enabled in zone security tab)?

I guess I'm trying to figure out what exactly is out of the box between the two bit states, it seems to be a hybrid. Thanks so much again. I hate not being able to mess wiht this directly but as a skeptic, anticipating the chaos. :) and praying.

ok, I've been rereading all the links you have provided and our discussion. There are two settings...I think I was getting confused between the two...

So it's Advanced Tab - Enable Enhanced Protected Mode needs to be unchecked, That's a switch for 64-bitness. This is unchecked by default.

What about Security tab - Enable Protected Mode? That is checked by default. Does this need to be unchecked? Maybe nothing has to be done to enable 32-bit and ActiveX, after-all.

Top Feedback Summary for May 12