The situation:
The Microsoft Edge Web Capture function saves a screenshot with the full 4-letter JPEG file extension, although the standard universal format is simplified as JPG. 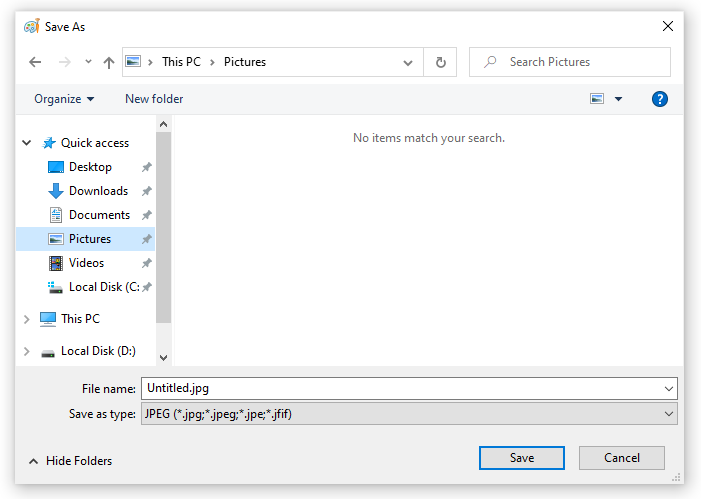 By default, the maximum length of a file path in Windows is 260 characters (Microsoft Source Here), JPG has one letter less, so it improves the situation.

Hi,
For me doesn't matter JPG or JPEG, too similar, but I want that to be replaced by PNG because of its lossless algorithm. I notice the degrade in quality in web capture files, especially when I take large scrolling pictures.
I'm going to send feedback about it and if you can please do the same through Edge browser.

In addition to the fact that the only option to save from the UI is 𝘭𝘰𝘴𝘴𝘺,¹ the 𝙅𝙋𝙀𝙂s are also saved in 𝟰:𝟮:𝟬, which, in this context,² makes the tool much less useful than, were it to only offer 𝘭𝘰𝘴𝘴𝘺 saves but formatted in 𝗥𝗚𝗕 or 𝟰:𝟰:𝟰. I consider having a 𝘭𝘰𝘴𝘴𝘭𝘦𝘴𝘴 𝗥𝗚𝗕 option for this use-case as an essential feature to achieve the bare minimum for usability,³ but I'd really like to see an option to use a newer format, such as 𝙃𝙀𝙄𝘾 or 𝘼𝙑𝟭,⁴ in 𝘭𝘰𝘴𝘴𝘭𝘦𝘴𝘴-𝗥𝗚𝗕. Finally, video-capture⁵ would be a fantastic option, at least in 𝘼𝙑𝘾 or some reasonably-modern format in full-resolution, possibly even offering a lossless or near-lossless option though 𝙃𝙀𝙑𝘾 or 𝘼𝙑𝟭, or, lol, maybe even utilize 𝙈𝙉𝙂⁶ after all these years (or, I guess, 𝘼𝙋𝙉𝙂) for short-duration captures.
——————————————————————————————
¹ Not offering a 𝘭𝘰𝘴𝘴𝘭𝘦𝘴𝘴 option is puzzling considering expected range of content for the application, 𝘦𝘴𝘱𝘦𝘤𝘪𝘢𝘭𝘭𝘺 when a format like 𝙋𝙉𝙂 would often produce, for much of the subject-matter of web captures, file sizes which are similar to, or [, more commonly in my experience,] smaller than those of the 𝟰:𝟮:𝟬, or even a 𝟰:𝟰:𝟰 or 𝗥𝗚𝗕, 𝙅𝙋𝙀𝙂 of the same content.
² In the context of web captures, having full-res color (i.e., 𝗥𝗚𝗕 or 𝟰:𝟰:𝟰) is 𝘱𝘢𝘳𝘵𝘪𝘤𝘶𝘭𝘢𝘳𝘭𝘺 important, because the subject-matter being captured will commonly contain things like text, shapes, or other vector graphics or illustrations with edges that are crisp and essential to the character of what the user is trying to capture. Using chroma sub-sampling, 𝘦𝘴𝘱𝘦𝘤𝘪𝘢𝘭𝘭𝘺 𝟰:𝟮:𝟬, is, perhaps, the worst compression feature to apply to this type of content, and, unlike other, smarter compression features found in 𝙅𝙋𝙀𝙂 and other modern 𝘭𝘰𝘴𝘴𝘺 formats, it is a blunt instrument that we would expect to provide a relatively trivial reduction in size with significant and unavoidable destruction of color information.
³ Ironically, I wouldn't say the same regarding inclusion of the option of a lossy format with chroma sub-sampling.
⁴ Especially, since I paid money for the Microsoft-Store-offered 𝙃𝙄𝙀𝙁 extension—it isn't hard to come by the codec or open-source (e.g., GIMP) or otherwise-free (e.g., Paint.Net) Windows software that contains at least reasonable support for 𝙃𝙀𝙄𝘾's encoding options (though, as far as I'm aware, they unfortunately do not support 𝘭𝘰𝘴𝘴𝘭𝘦𝘴𝘴-RGB encoding, so the "𝘭𝘰𝘴𝘴𝘭𝘦𝘴𝘴", which I think GIMP changed to "𝘯𝘦𝘢𝘳-𝘭𝘰𝘴𝘴𝘭𝘦𝘴𝘴", option is only 𝘭𝘰𝘴𝘴𝘭𝘦𝘴𝘴 up to the (𝑟, 𝑔, 𝑏) → (𝑦, 𝑢, 𝑣) approximation error, though, lol, it's an option I'd strongly prefer this to 𝟰:𝟮:𝟬 𝙅𝙋𝙀𝙂), but I paid the $1 with hopes that of better OS integration and more common implementation in Microsoft-programs, and, disappointingly, Edge (at least in the dev channels) is the kind of place I'd really hope to see its utilization at this point. I feel similarly about 𝘼𝙑𝟭 (ideally, in 𝘼𝙑𝙄𝙁), but Apple's strong integration of 𝙃𝙀𝙄𝘾 in iOS has made the latter more ubiquitous and important.
⁵ I'm more concerned with this than I would otherwise be, because I was recently screwed over by 𝘙𝘢𝘻𝘦𝘳 when purchasing a very expensive, Blade 15 Advanced laptop with a 3080 and an i9, as the 3080 is rendered useless for desktop capture of the integrated 2160p OLED, because, shockingly, they elected to disable changing GPU mode for this particular configuration.  Though I'm less concerned with format here, as I'm likely to re-encode, using external software for efficiency, to a format that best-fits my goal, it would be nice to get a 𝟰:𝟰:𝟰 option with this as well, for the same reasons as stated above regarding expected subject-matter (it makes absolutely no sense to me that we're still using dumb, blanket 𝟰:𝟮:𝟬 chroma sub-samlping, even for the highest-quality format available to consumers, UHD BD—I would think that allowing modern encoders to decide where to drop or retain chroma resolution could always produce a superior quality-to-file-size than a blanket, homogenous reduction in chroma resolution across the frame without regard for content, but maybe I'm wrong).
⁶ Lol, I recall being so excited, >20 years ago, when 𝙋𝙉𝙂 was finalized and started to gain general software support, I read about 𝙈𝙉𝙂, destined to replace the ancient, inefficient, indexed, and overloaded 𝙂𝙄𝙁 format with a modern 𝘭𝘰𝘴𝘴𝘭𝘦𝘴𝘴 (and, optionally, 𝘭𝘰𝘴𝘴𝘺 through 𝙅𝙉𝙂) format, and I'm still holding out hope, despite the non-standard 𝘼𝙋𝙉𝙂 existing to make sure we never get what we were promised. I will say, the ancient appearance of the indexed, dithered 𝙂𝙄𝙁 has grown on me, as it does tend to add to the humor factor of some animations, but it would be nice if we could get this without the insane file sizes.