So, lately, perhaps for the past week or two, I've been running into this issue. 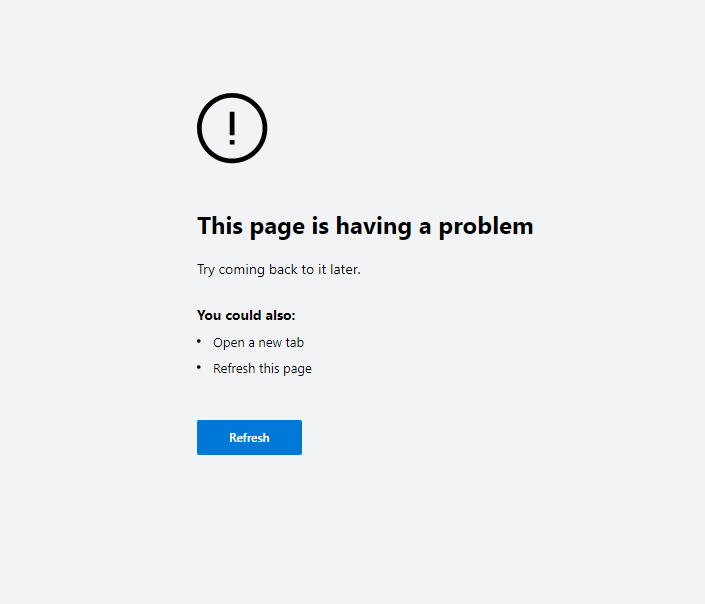 There doesn't seem to be any rhyme or reason to it. I'll be scrolling through a page or watching a video and all of a sudden, BOOM. This page is having a problem. I think I first noticed it Friday of last week while watching a movie on Shudder. I had to refresh the page for the movie to continue playing. It happened again last night and today just browsing webpages. I tried loading the same pages on Edge Classic and Firefox without issue.

Re: This page is having a problem.

@Bradcore   I've had a few isolated instances of this happening, maybe three or four over the last week, out of hundreds of pages visited.

I suspect that it has to do with Edge Chromium's User Agent identification (this is the identification code sent by every browser so that a website can be optimized for use by that browser).

Edge Chromium identifies itself as "Edg" rather than "Edge" in most cases, but not always (see the forum conversation "Edge Chromium Switches User Agents" for a little more information about this) to avoid confusion between Edge Classic (which is an EdgeHTML browser) and Edge Chromium (which is a Chromium browser like Chrome and Vivaldi).

Because Edge Chromium is not yet an "official release", some websites may not yet recognize the "Edg" identifier, and that might be why some websites "break".

Here's a  bit more information from Microsoft  about this:

"With Microsoft Edge adopting Chromium, we are changing our user agent string to closely resemble that of the Chromium user agent string with the addition of the “Edg” token. If you’re blocking site access on user agent strings, please update your logic to treat this string as another Chromium-based browser.

"Below is the user agent string for the latest Dev Channel build of Microsoft Edge:

We’ve selected the “Edg” token to avoid compatibility issues that may be caused by using the string “Edge,” which is used by the current version of Microsoft Edge based on EdgeHTML. The “Edg” token is also consistent with existing tokens used on iOS and Android. We recommend that developers use feature detection where possible and avoid browser version detection through the user agent string, as it results in more maintenance and fragile code."