Good, I have installed the Stable Version that is hanging around the internet, does this work 100% and will it update automatically?

@Drew1903 - We agree about the Stable channel at a later date, and for users not to download/use claimed versions into MS releases it officially. So the Edge insider channels will end once Stable is released. Is that a confirmed thing? Some of us were wondering about that and assumed Microsoft would follow Google's route with the Canary, Dev, Beta channels by continuing them even after Stable is released with the insider channels being a flow from Canary up to Beta for testers/insiders that are open to using them on top of the stable version. Mainly because Google Chrome has the same (Can, Dev, Beta) channel flow for Chrome since around 2011 even though they have of course their stable version. I've been using Chrome Canary as a secondary browser for a few years now. Ref: https://www.google.com/chrome/canary/ & https://www.google.com/chrome/dev/

Personally, I do not know what the 'long-term' plan is for Edge Insiders once Edge C moves to non-beta, to a non-Insider. But, do I think it is likely EIP (Edge Insider Program) after that?, yes I do. There is something to remember, here. If we go back a few years beta testing did not involve the 'public' not, Consumers or Enterprise.  Starting w/ Vista one has to apply & be accepted as a registered MS Beta Tester, then 7 & 8 by invitation.  It was when we started working on 10 that the Insider Program materialized.  Since & now we have Windows, Office, Bing & Edge Insiders (people like myself can be all 4). There is obvious logic, besides the meaningful Open Source part, that Edge Insiders & the work, can continue, the same as the other Insider Programs. Point is, we did not have Insiders working on products before the last few years.  Now, that such approaches are in place, they can invaluably keep working 'behind-the-scenes' to have ever improving & (theoretically) problem-free highly appealing products.  Involving Users in the work is very productive; especially, when both Consumers & Enterprise are represented.

Without fussing over names of tracks or how many, point is there is a trend, now, for Insider Programs to exist & plow ahead with their work, for the benefit of all, even after a product goes "GA", to use a non-Chromium term. (Stable being similar to RTM, if one wants to think of it like that). GA = General Availability, as in Official 'Public' release, not beta version & not Insider version.  Same as Win10 1903 18362 and then, simultaneously some of us, Windows Insiders, are, also, running frequent Insider Builds w/ a current Build # of 18965.  No reason, at all of Edge not doing the same thing, fundamentally; won't surprise me, at all.

@Drew1903 Yeah, I hear ya. I remember the Windows 95/98 days of what you said. Beta testing wasn't public open, and it was as you said about applying. Even with non-Microsoft products where sometimes you had to filled out information identifying you had some "computer or software knowledge" (sometimes even asking if you knew C++) to even be considered to beta test software. It wasn't a "open to anyone that wants to jump on board and download the preview builds."  Especially in the late 90's when a majority of software was closed source. Today open source is the popular road and it's more public open for beta testing. Every popular browser has channels like these for open public beta testing. Firefox has their Nightly (canary), Dev, Beta builds you can download. Opera same thing (Dev, Beta, Stable) even Apple's Safari has a preview (beta) browser you can use along side their stable version. Heck even Samsung Internet Browser now has a "Beta" version for their android devices (to be downloaded).

I also believe there's a marketing standpoint behind it (at least by Google). Google has their Chrome beta channels (identical to Edge's in name and time frame of update). But they don't just leave them on their web page in obscurity for people to find, they market them out as if they're four separate browsers even indicating they are separate and can run separate from each other. Google declares their version of Canary as "unstable" but with a "bleeding edge of trying all the new features first" type of tag line. And so on and so with Dev and Beta. They not only have the OS versions but Android and iOS where they push them in the play store. Google Chrome Canary has 4.3 stars on the play store with 29,000+ votes. Their Dev browser has 4.3 (or 4.4 as it bounces) with 76,000 user votes and Beta 271,000 users vote around 4.5 stars. So marketing wise it's as if Google has four browsers on the market not just one stable browser and in the background the betas. So whats my point on all this rambling on lol? I can see Microsoft in an attempt of marketing and bringing in more user share keeping open the three insider channels in a way to get people to test the features of each channel but as a way to market four browsers (even if three are beta) to users.

Yes the Edge beta's might not have user support and all that stuff...but from a MS standpoint I would want a user to be using Edge Canary to get their "new feature" fix instead of Chrome Canary or Firefox Nightly (it's there beta version that updates every night) and not to have just my one stable browser competing against Chrome's four browsers that are all promoted out. Now I'm sounding as as if the other three channels aren't beta. We all know they are beta's...Google and MS know they are...and of course we all know what the word beta and alpha is in pre-release software testing, but the way Google "advertises/promotes" they make it seem it is more of "testing new feature before anyone else" than a "beta test Chrome here for future stable releases". Only time the word beta is used by Google with Chrome is with having the word "Beta" across their Beta Chrome icon.

When I go Google Play Store and simply put in just the word "Chrome" I get this come up: 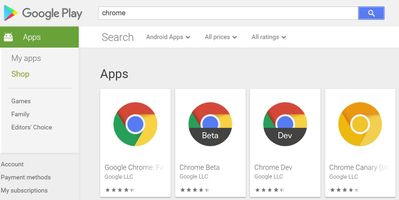 When I put in "Edge" I get this come up: 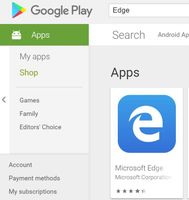 It looks like Google has four browsers "three with new features to test out before everyone else" while Microsoft has only one stable browser. So I wouldn't be surprised to see the Insider Channels stay. As a way to keep the flow of insider testing going as Chrome does with their channels and to market (especially if they make an android version of their new Edge C). Edge as having one supported stable version but three other versions to test out "new features before everyone else" so keep Edge users and newbies in the Edge family and not wander off to try out new features of the beta versions of Chrome and Firefox.

I went off topic of the original post of the, but it's something interesting when it comes to Edge and Insider Program and getting a high user base to use and/or switch to the new Edge.

Good stuff, I hope Microsoft changes their naming system when publishing their apps on Google play or IOS so that when people search for Edge, all of the variations of it comes up in the search result.
it was a great move when Microsoft put Windows insider option inside Windows 10's settings. maybe in addition to the mobile app marketplace naming and more advertising on their beta products, they also should put an option inside the Edge browser itself, maybe in the about page. they can let people switch to different Edge channels (Stable/Beta/Dev/Canary) right from inside the browser with a nice description for each of them when the user selects them. so once the user choose another version the browser starts downloading it and after a browser restart, the new version comes up.

Firefox did the same some years ago, it was very convenient to switch between Firefox stable/Beta/Nightly right from their about page.
0 Likes
Reply
Highlighted

These days TOR is mostly used by the same people you describe, desperate to find out what the dark web is and all the filth in it. but little do they know, there is no search engine for dark web lol.
it's not like there is no organization in the world that can't stop it though. of course they can, they just don't want to.
image if FBI could pull that hack off against TOR users then what NSA could do!
right now TOR is not as safe as it used to be say in 2014 when Ed Snowden used to talk about it.
there are also some people that use it to circumvent censorship such as people in China or other countries with domestic firewall or even DPI censorship and TOR is great for them because of custom relays and stuff.

Cool, so we agree the Edge Insider Program is likely to continue.  The scenario you suggest, as I said, is similar to other MS Insider Programs such as Windows 10.  There is regular Win10.  AND there are Insider Builds AND more than one track of those and they receive Builds/Updates at different rates AND all Insider Builds are betas.  So, add Open Source into the equation and there's even more impetus to keep it going; means there is both Feedback AND Developer/IT input, PLUS, now coming from the whole gamut of Users from Home to Business.  The marketing aspect is two-fold and some of us saw this (coming) years ago. (1) It creates interest, awareness, familiarity & (hopefully) enthusiasm to use the product even before it's released, in the traditional sense. And (2) it means the Global customer ultimately receives a better & more problem-free item than, otherwise.  Likely EIP will, indeed, continue, regardless of number of Channels in the 'background' (so to speak) to the NON-beta, NON-Insider Edge C, once that drops.

Auto-translate not work on my edge dev