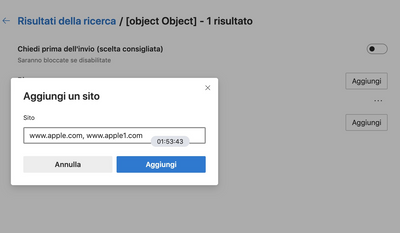 it takes hours to add such setting

2) if i visit bookmark folder "allow setting" i could simply right click the folder and tell edge add such setting to allow flash... same if i select multiple url inside bookmarks or history. PS: this should work with multiple setting, not only flash...

3) import export, for faster add to other user.

All my other suggestions are here: https://link.ws/edgesuggestions

From end 2020-10 all suggestions are written on both Edge and Chrome at the same time, suggestions before 2020-10 are available only on Chrome.

*to avoid a ban from Google, I submit only limited post pro week.

"*to avoid a ban from Google, I submit only limited post pro week."

that means you're not afraid to get banned from Microsoft?
0 Likes
Reply

@HotCakeX  from you answer i can just understand that you haven't read what i wrote in other post at all.

PS: i have the written permission from edge team and from microsoft.

normal we haven't read all you post to many thing in little time, and even if it's not spam (since it's legitimate content, too many to read :/)
0 Likes
Reply

@Wittycat you see it a lot now, because these are all suggestions i accumulated over years of usage and that i sent to google one chat and feedback center of google individually, or apple. now at the end i wrote all what i needed to write, there are maybe 2-3 suggestions, that i need to write in future. after that i will probably post here new suggestions only once i discover problems/limitations (so maybe 1-2 every x months/years). i do batch similar things with other devs too. now i spend time with edge, next week maybe with apple again, then with mac app x, ...

PS: this doesn't mean that edge need to implement all, or that all need to be implemented in the next 3 weeks. some things can be done with extensions too, but i still suggest a direct implementation inside edge, because the extension toolbar is limited in the amount of extension that we can click without need to click --- and then search the extension. it's about 20-30 extension*, with edge even less, because they keep to much space between each extension.

but to answer this topic about ban, i write the main points here:

1) there is no way to get a directly permission with google, because google devs are not opened like edge, and they ignore such message too.

2) the ban was reached after

2a) they saw i used multiple account to write (which for me is simply better, this is why i continue to do that now too), so they banned all my accounts. i wrote google why i do it in that way.

2b) the fact i wrote a suggestion 3 times with different topics, but they saw it as 1 obsession feature request (i did this, because the dev wrote only to comments of other user, that haven't explained the reason why to keep it at all. so he ignored all reasons, limitations and suggestions to improve such problem). If the dev didn't close the case in such way, without even talking about it, i wouldn' do that (1 post is enough).

2c) the batch won't fix from another dev, only because after waking up he saw 40-50 suggestions. this is why i don't send 50 suggestions in 1 minute anymore. if you check list 2, which includes suggestion of list 1 marked as won't fix, devs started to discuss about it. this is how things should happen. a team of devs decide about it.

2d) the way i wrote after i see the devs didn't replied to me after x request to say something and don't ignore it. i wrote the reason of my reaction to google platform team (and this was not to offend the dev, but to make such point clear). at the end now i avoid such things, because i noted they understand it in the wrong way.

PS: i'm still looking with google to find a solution to this problem, but until now i haven't received any answer.

Where is it?
0 Likes
Reply