For the last week or so, I've been getting "Get the new Microsoft Edge" popups more or less constantly, and the popups are interfering with my workflow.

I have three observations:

(1)  I have Edge Chromium installed on each of the three Windows 10 computers I use for work purposes, and on my MEI/WIP test computer.  Microsoft is unable, apparently, to determine if Edge Chromium is installed, despite the fact that each of the computers is set to "Full Diagnostics", or just doesn't care.

(2)  While I've actually had the popup display when using Edge (unbelievable), that is infrequent.  However, I get the popups all the time when I'm using Firefox -- top of screen, bottom of screen, all over the place.  I use Firefox as my primary work browser because I require cross-platform availability (Windows, Android, iOS and Linux) of my Favorites/Bookmarks and other synced data.  At present, Microsoft Edge is not available for Linux, despite repeated requests from Microsoft Edge Insiders.  As a result, I cannot switch over to Microsoft Edge as my primary work browser.  It is "Planned" (see "Top Feedback Summary"), but not listed as "Planned for Summer", so I suspect that we are at least 6 months away from having a product to test, let alone having a working product released.  Microsoft needs to get the lead out and get moving on the "Edge on Linux" project.

(3)  I've reached the point where I avoid using my Windows 10 computers altogether when I have to do serious work with a browser. I use my Linux computers instead because I can work without batting down popups every few minutes.  I don't know whether or not other users have reached that point yet, but I'm finding myself avoiding Windows 10 altogether when I want to use the Internet.

Marketing Edge is one thing.  Edge is a solid browser and should be marketed.  However, annoying users to the point where they start using other operating systems to get work done is quite another.

Several friends and work colleagues (knowing I'm an Edge Insider) have bent my ear on this subject in the last few days.  I think that they are all Chrome users, so it isn't just Firefox users who are playing "whack a mole" with the popups.

The message boards (including Microsoft's community forums) are full of complaints, as well, and I notice that Google is starting to capitalize on Microsoft's over-the-top marketing by posting its own "hide annoying adds" popup when Google is started from Microsoft Edge: 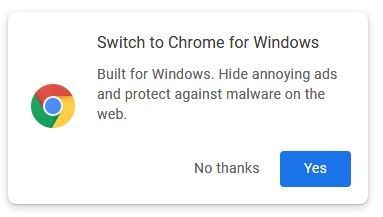 I think that Microsoft is shooting itself in the foot, and I would appreciate it if the Microsoft employees on this forum would communicate that point to the marketing folks.

@tomscharbach Thank you for bringing this to our attention here. We're really sorry to hear that these notifications are compromising your browsing, especially while using Microsoft Edge! This is certainly not the experience that we're aiming to provide, and we take reports like this seriously, especially when coming from one of our long-time Insiders.

We do work closely with the Marketing team, so I will pass this along to them. In the meantime, it would be helpful if you and any others who see this can submit feedback and diagnostic data through the browser.

@Deleted - You may want to convey the fact that many of us consider this more than just a notification, it's harassment.

I have every single notification that it is possible to disable, disabled (and several I shouldn't be able to). It should be really easy to understand my intentions from my privacy settings.  Yet there it is, when I bring up Chrome, on top of content I want to see (actually need to see for my job) "Get the New Microsoft Edge".

Honestly, it's rubbed me the wrong way so badly already, I wouldn't install or use Edge just based on the principle of the matter.

@geofflisk Thanks for sharing your experience with this too. I've shared this thread directly with our Marketing team; they take feedback like this seriously and are looking into it. We appreciate you letting us know!

I am also having the same problem. I am a Google Chrome user. I am ok with having Edge installed but I want to be able to disable it cause I don't plan on using it. I've used Google chrome for years and know and Like how it works and don't plan on changing now I just want the pop up's to stop. I have it installed why won't it register? it keeps telling me to get the new Microsoft edge. It automatically got installed with the new update. Any idea how I get it to stop the pop up's @tomscharbach

@Katlin_Albert  I'm at a loss about what to do, Katlin.  I've tried various "workarounds" mentioned on message boards (e.g. this example from the Microsoft Community boards).  None worked.

The fact that Windows 10 can't doesn't/can't recognize Microsoft's own browser is laughable.  If the equivalent happened with a mainstream Linux distro, the support community would be up in arms and the issue would be fixed quickly.

Not so with Microsoft, apparently.  @Deleted reported this to the Marketing Team about six weeks ago (see earlier posts in this thread), the reported it again about month ago, but nothing has changed.  I don't understand why Microsoft is so brick-headed, but I think that we are just going to have to wait until Microsoft gets its head out or a lawsuit in the US or in the European Union stops the marketing popups or forces Microsoft to tone it down.

@DeletedIt would seem you are not taking it seriously. I just bought a new laptop on 11/9/2020 and I am having the same issue. Why does Microsoft feel it is okay have ads for Edge popping up on my computer when I choose to use a different browser. If I wanted to use Edge, I would. It happens every time I open Firefox. I don't want to use Edge. Why am I being harassed to download it? Why does Microsoft not take "no" for an answer? Why is there no way to disable this obnoxious popup? In what way are you taking it seriously by ignoring this?

This Edge popup issue is just another reason to hate Windows. It is so annoying! Doesn't Microsoft pay any attention to user feedback.
0 Likes
Reply