I'm sure most of you have seen the host of articles and social media posts in March echoing an academic study claiming that Edge is one of the least-private browsers when it comes to collected telemetry. Incredibly, Google Chrome is rated as one of the most private browsers in this study (2nd tier behind Brave)!

Some of us have been out there strongly questioning the study's methodology and conclusions. Eventually, a journalist from ZDNet actually talked to a Microsoft spokesperson who, of course, disagreed with the study's results. However, I don't think this quick PR response is adequate to the ongoing damage caused.

The initial round of articles make alarming assertions like "...Edge is the least private browser", "Edge Browser Scores Worst in Test..." and "Edge has more privacy-invading telemetry". Subsequent articles quoting Microsoft's spokesperson do little to dispel the attacks with titles like "...Edge flunks privacy test, Redmond cries fowl". Even worse is the ZDNet article which gives Microsoft's response an almost sarcastic backhand and reads more like a Hollywood gossip column. The resulting impression is we can never know for sure which side is right in this entertaining squabble.

Weeks later, new comments continue to appear online using this study to back spurious claims that Edge is horrible on privacy. Most of us here know better, but having an authoritative refutation to cite in response to these claims would be helpful. A follow-up study may be the only way to definitively refute the negative press. Specifically, it needs to address residual ambiguity around whether the official release version of Edge sends hardware UUID by default and, if so, if this can easily be turned off in the very beginning by choosing not to share browsing data during install.

Re: Questionable Study Claims Edge "has more privacy-invading telemetry than other browsers&quo

there is already an answer to that.

She added: "Microsoft Edge asks for permission to collect diagnostic data for product improvement purposes and provides the capability to turn it off at any later point. This diagnostic data may contain information about websites you visit. However, it is not used to track your browsing history or URLs specifically tied to you."

so basically, that Edge spokeswoman was talking about these: 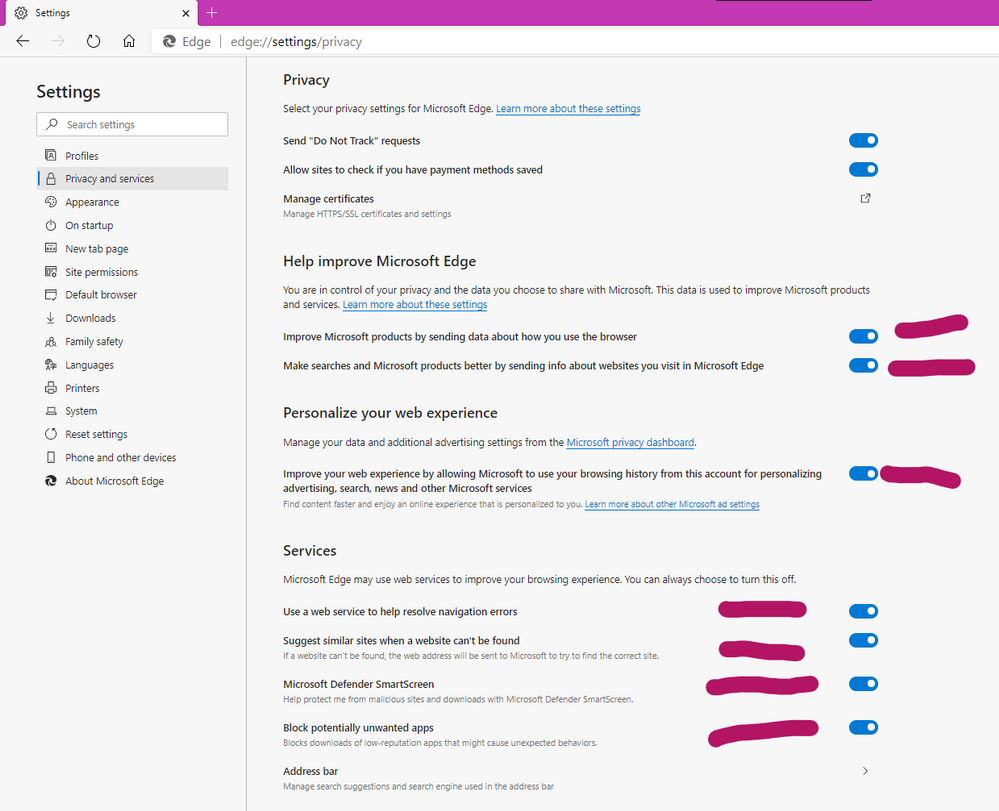 I'm on Canary and I want them to stay on to help Edge but all of those options are there, for anyone, to turn off at will.

Re: Questionable Study Claims Edge "has more privacy-invading telemetry than other browsers&amp

@HotCakeX yeah, the articles I linked from Windows Central and ZDNet contain this same quote from Microsoft's spokesperson. As far as you and I are concerned: end of story. However, if you read the article from ZDNet, you'll see how the lack of a follow-up study proving this statement leaves the door open to continue attacks on Edge privacy.

Immediately after the Microsoft response you cite, Chris Matyszczyk of ZDNet responds: "So that settles it. Surely you're regularly turning your permissions on and off. Or perhaps not." Implying one would have to regularly turn permissions on and off doesn't even make sense since you and I know—even if hardware UUID were transmitted, the data would only have to be removed once and permission to send that kind of telemetry would only have to be disabled once. But that doesn't stop doubters from having a field day with this residual ambiguity.

I didn't write this post to convince people like you. I'm suggesting a stronger response might be needed for the general public at a critical stage when millions of less knowledgeable and impressionable users may be reconsidering Edge as their default browser.

P.S. I'm already familiar with all the settings you just added. You're preaching to the choir. ;)

P.P.S. Here's the relevant Microsoft Edge privacy reference, so someone won't feel the need to post that as well. The point is, a typical user will not go as deeply into this as most of us here in the Insider program. That's why I feel the source of all this controversy—the study itself—needs to be debunked with a follow-up test proving it wrong.

Re: Questionable Study Claims Edge "has more privacy-invading telemetry than other browsers&

I totally agree with you and I understand :)
I used the bold font for other viewers of the post to see it clearer because on those articles it's kinda hard to find that paragraph. and like you said, Microsoft needs to answer them again and probably a bit stronger, looks like they constantly need to be reminded of those options.

Re: Questionable Study Claims Edge "has more privacy-invading telemetry than other browsers&amp

@HotCakeX No problem. Thanks for your quick response and contribution. I thought about including more direct quotes but was concerned about my post getting way too long.