Anyone know of a way to manually configure PWA's to use the tab strip settings?

This is what Tab Strip in PWA's used to look like.

(I know Tab Strips in PWAs is experimental so this is primarily for awareness, though I'm hoping it can be fixed nonetheless).  This feature was a huge help in keeping my documents organized within PWAs (or - "fenced" would be a more honest description).

This feature is still working in Chrome 105.0.5176.3 so I'm wondering if it's something in a recent Edge canary built that has broken the functionality.

I'm not sure if we fully support tabbed PWAs yet, so it's possible this may have just broken. Let me ask the team about it!
0 Likes
Reply

Yeah, I do have flags turned on for tabbed PWA in Edge, so I know it's not a GA'd offering, but here's a test to run to show it can/does work on some sites...

Tabbed PWA working in Edge Apps
1. go to https://excalidraw.com/ and click on the install app icon from the address bar. Notice that there's an option for "Open as tabbed window" 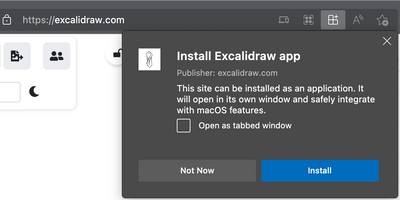 Now, if instead, I use the Edge Apps Installer, it creates the PWA without ever giving me the options dialogue.

So... this becomes an issue for sites like Google Docs, which for some reason, Edge doesn't show the app install icon in the address bar (i.e., only way I can install Google Docs as a PWA is through the new Edge Apps, which as shown above, doesn't give me the option to make it a tabbed PWA).

Ah, so it's only that particular entry point, THAT'S why I didn't have any problem with it during my own testing. I'll let the team know!
0 Likes
Reply

It would be great if this came out of the experimental stage, though I imagine that's aspect is an issue with Chromium rather than Edge. It's a feature I find very useful in Chrome, but maybe not many do.

It seems a quick fix would be to make Edge recognize more sites as apps, though I can understand that they might not be excited to do it for their competitor.
0 Likes
Reply

Resolved in 108.0.1438.0 (maybe earlier, but haven't checked in a while).
The "Open as tabbed window" checkbox now shows up again on all sites, including Google Docs.
Just uninstall and reinstall the PWAs for the option to show up again.
0 Likes
Reply