I'm encountering the following issue on Edge running on Windows 7. Could someone help explain the difference in behaviour?

1. On IIS Server on another machine logged on to windows domain, create a simple Application e.g. testwin. And set Windows Authentication = Enabled. (all other authentication = disabled).

2. On edge on Windows 7, visit that application using https://servername/testwin

3. Immediately 401 forbidden is shown and no Credentials Dialog is shown to allow user to enter their windows credentials.

If you do this on edge on Windows 10, the Credentials Dialog is shown correctly.

I tried solving it by setting several policy settings such as AuthSchemes and AuthServerAllowList but it has no effect. 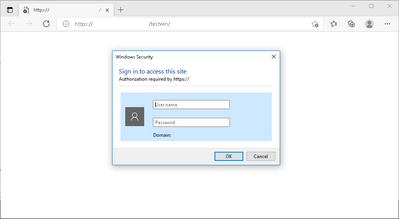