I noticed a new feature while checking on my lifetime Blocked Trackers! 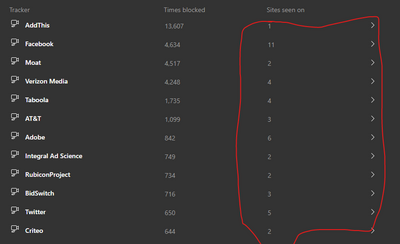 I don't see this in Stable, so I assume it's a new feature. Am I right, HotCakeX?

I've seen it around a months ago, not sure about the exact day, but it's definitely not new.

something absent in Stable channel and available in other channels doesn't mean it's "new".

in Edge, a new thing is something that is not present in a previous Canary version and is added only in the latest version.

other than that, everything is already released and not really new because people already know about it, seen it and 3rd party news websites already posted articles about it.

if you think it's new, that's cool, you can enjoy it yourself in your usage.

@HotCakeX Then if you have Beta, is it there? Because I don't have Beta and can't install it because of CPU storage amount
0 Likes
Reply

no I don't have beta, but not everything from Dev goes straight to Beta, and not everything in Beta makes it to the stable channel. some features are kept and delayed on purpose if they still aren't stable enough and need more work.
I've seen this happen with 2 features already (setting custom picture for NTP, and sidebar search)