That flag was just there yesterday.

In the morning, I updated my built-in Edge Legacy to Edge Chromium. Didn't like it over Edge Legacy. Uninstalled after a short time, returned to Legacy. While doing that, I also deleted a bunch of unused registry keys and leftovers with CCleaner after uninstalled Chromium update.

Later, I opened Edge Dev for usual browsing intentions but didn't see global media controls option on toolbar while playing some media. Checked the flag right away and there was no sign of a flag.

How could that be happened? Did I mistakenly delete some app settings on Windows? But I reinstalled the app [Edge Dev] though. Shouldn't that be enough to restore missing necessities? Any ideas on what should I do? 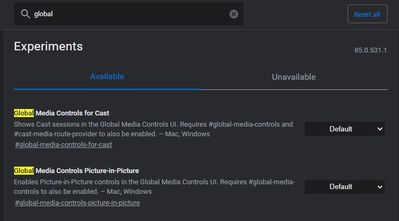 I didn't know how to apply command-line switch, If you're like me, just open properties of Edge Dev shortcut and add the aforementioned code at the end of "Target:"