With new Edge Chromium Microsoft seems to show intent to make leave web content an integral part of Windows and Office product lines. Based on their presentations, the team aims to concentrate on product differentiation by new features rather than putting most resources in "chasing" Chromium engine.

But what will  be different in Edge compare to Chrome? Lets gather and share such info in this thread. An interesting article was posted by TheWindowsClub. It lists primary changes and replacements Microsoft plans at this stage to introduce in Edge Chromium. How its going to affect Edge users?

P.S. This topic is not intended to discuss missing buttons, features, and icons in today's Edge builds compare to Edge Classic. Rest assured, they will be gradually added as near complete feature set is being transferred. Lets talk here about core technologies and brand new user experiences that can make Edge Chromium a solid contender to currently hugely more popular Google Chrome.

So here is a list of Google Chrome services slaughtered in Edge Chromium thus far... :) Some of these services were replaced with similar Microsoft services, and others shutdown without replacement. 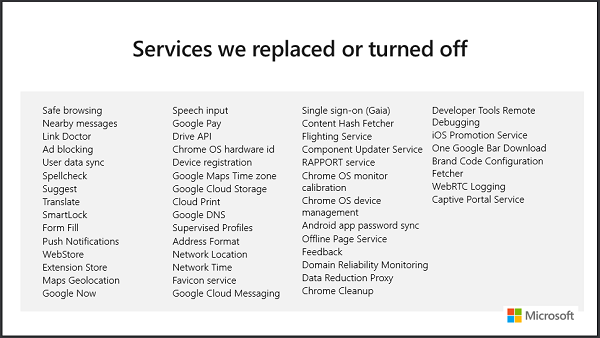 As the changes in services confirm, Microsoft intends to make its Chromium derivative just like Windows 10 regularly call home. But what prompted Microsoft to abandon its very own EdgeHTML in the 1st place, and suddenly make friends and share common browser engine with Google - its fierce competitor? And how Microsoft and Google teams leave together under this common project roof?

There is an interesting story behind it - so interesting, it can make it to a prominent Hollywood movie given huge importance a web browser now plays in our life. So lets find out:

Replacing Google Services with Microsoft's own is one thing, more or less expected. Bing apparently is a no choice forced option on Edge Chromium New tab pages, Goggle Search - no more. But is that enough to draw massive interest to the new browser? Probably not... so Edge team is going to capitalize on known Edge Classic strong points, and further focus on a few key areas expecting them to deliver key differentiation in features and user experiences from Chromium:

EFFICIENT AND DIVERSE MEDIA PLAYBACK FOCUS IS MISSING ON THE ROADMAP

What struck me in the above list is seemingly absent mentioning of advantages  given by better browser integration with OS. For example, Edge is well known for its more efficient video playback, which is critical for YouTube lovers with older laptops and devices. I think emphasizing this advantage more, Edge will be able to attracts a very large share of consumers. But instead they cut off PNACL sandbox support in Edge, thus making impossible to install and run popular media extensions, and even Google Earth. Sounds crazy - what do you think guys?

Delivering video content efficiently, so high resolution and bitrate videos can be downloaded faster and played on weaker older hardware - requires a kind of dark art advanced skills and knowledge. Videos comprise now 70% of all crossing internet bits, and will approach 80% in 2 years as per Cisco research. Microsoft was striving for the last few years to deliver better video playback with Edge Classic compare to any other browser. In fact, Edge team got Technical Emmy Award for that outstanding effort. New reports surfaced of Edge Chromium geared for efficient 4K playback.

Now its time to extend this support to a new contender for defacto internet video standard AV1 codec. I wonder if someone from Edge Media team can share some plans and challenges in bringing superb Edge Classic's video playback level to Edge Chromium? For example, would be interesting to see Edge Chromium supporting HD video torrents search and direct torrent stream playback, possibly through a professionally made by the Edge team open source extension.

After Edge Chromium announcement, there were numerous questions from Insider release testers, what familiar features will be implemented first, and what directions MS Edge team will concentrate on. In reply, MS Edge team management published an interesting article

What to expect in the new Microsoft Edge Insider Channels

Its an interesting read, clearly  outlining a range of technologies, features, and directions the Edge Insider team is focused now.

@sambul95  "MS Edge team management published an interesting article "What to expect in the new Microsoft Edge Insider Channels". Its an interesting read, clearly outlining a range of technologies, features, and directions the Edge Insider team is focused now."

While the Insider's guide you point to is interesting and informative (at the 50,000 foot level), the need for speculation about features/functions under development or being considered for development could be eliminated, in large part, if the Edge team would make a  high level development road map available to Edge Insiders.  What percentage of the posts on this forum asking about this/that feature/function ("Is x planned?"  "What is the status of x?") would be answered by a such a road map?  50%?  75%?

The link you posted above just points to the thread you started that gives no info whatsoever about the subject. Are you trying to swing user attention to some empty demands and speculations in your topic? Why start several threads about the same subject to begin with? Isn't it a bad idea proven thousand time by forum best practices, and most forum rules? ;)

I don't see any request from you in this thread for a more detailed road map from the developers, so it's not the same subject (but is related, so useful to link).

Replacing Google Services with Microsoft's own is not the only change  they plan for Edge Chromium. The team is actively looking for new ways to position the browser as an advanced productivity tool for both corporate and consumer warriors, technology novices and geeks .

The first line of new directions and features planned for initial Edge Chromium release was presented during Build 2019 event and outlined in the article:

Microsoft Edge – All the news from Build 2019

It emphasizes a) productivity, b) privacy, c) developer, and d) enterprise support as today's strategic directions.

Let's look at what's in store for Edge enterprise users, who as expected demand compatibility with venerable Internet Explorer and other 30-year old Microsoft products still in use on their LANs. For enterprise the Edge team prepared a gifty IE ActiveX that will seamlessly auto fit right into the Edge open tab when facing a webpage designed for Internet Explorer. One would be surprised to learn, the websites designed for ALL previous IE generations are still supported.

To learn more about IE integration into Edge, watch this video. Its an interesting journey into early tech, most current Edge developers hardly heard of.

Has there been any target date presented foe a first release version of Chromium based Edge?
0 Likes
Reply