Is the Sync up?

Is the Sync up?

Sync was crashing for many users here. Any update from team on when Sync would be back to its functional state?

Hi,
probably not in this year..

"Before we get on with the rest of the features and additions that are worth mentioning this week, you should know that favorites sync is still disabled for the majority of users. This includes brand new machines you install Edge on, so if you’re setting up Edge for the first time and want access to your favorites, you’ll need to manually export your favorites to a file on a different machine and import them on the new one. We’re also working on a deduplication mechanism once favorites sync is re-enabled, which should prevent new duplicates from coming in as well as remove duplicates for users who have already had their favorites duplicated. "

Thanks for the info. I read it earlier...

Sync is needed very badly because I need to access my data from other PCs or phone...

Beta should be still fine though..
in the knows issues in here:
https://www.microsoftedgeinsider.com/en-us/whats-new
they only mention Dev and Canary, not Beta. so i assume it is isolated from this problem
1 Like
Reply

Yes as @HotCakeX mentioned it is still disabled for most folks... 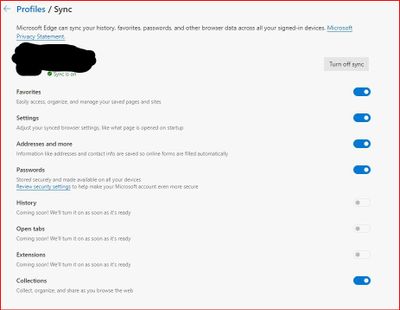 Good news! We are slowly rolling favorites sync out to users in Dev. Please sign out and sign back in to the browser and let us know if you see any changes. This is enabled again in Canary, so if you don't see it in Dev, give it a shot there.

Hi, Thank you for the good news.
with the new roll-out, are the past issues fixed along with it?

Favorites duplication and old favorites reappearing after deleting, specially when multiple devices are syncing with the same Microsoft account. because according to this post they are planned to be fixed in December so i hope this is it

@Deleted Thank you for the info. I enabled the master switch bc my browser was crashing even after the Favorites sync was disabled.

I would like to tell the team that the sync speed is very slow. I deleted my Mobile Favorites folder having over 200 favorites, but it has been hours & they haven't been cleared yet on my phone or other PCs.

Also, I noticed that the sync for Open Tabs is also not enabled now: 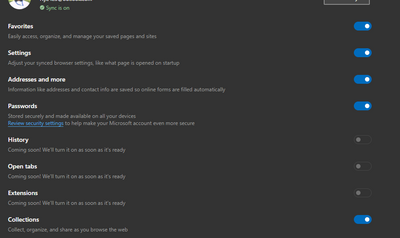 Any update on these issues?

Same here, open tabs sync has been disabled since around 2 weeks ago
1 Like
Reply

@HotCakeX maybe the Open Tabs sync was the one responsible for crashing the browser? Because at that time when it was crashing for me, the Favorites sync was already turned off...

@HotCakeX "Beta should be still fine though ..."

However, sync is not exactly "fine" in the Beta version, either. Favorites sync is either extremely slow (as @Rohit Yadav commented about other builds) or broken in the current Beta build, if my recent experience is indicative.

A few days ago, I took the time to prepare EdgeClassic Favorites for the January cutover, working to create a test environment for the cutover, so that I can see and understand exactly what will happen with the EdgeClassic to EdgeChromium cutover.

I've read the available Microsoft information currently available on the cutover (intended, primarily, for Enterprise customers rather than consumers), but I know, from long experience in IT, that planned results often differ from actual results, so I decided to set up a test environment to anticipate the issues I'll face after the cutover.

In any event, I took the following steps:

EdgeClassic: I cleaned out most of the Favorites on my desktop computer, reducing the number of Favorites to 16 on the Favorites Bar and 11 in the Bookmarks Menu. I then changed the name of each Favorite/Bookmark to mark the origin as coming from EdgeClassic. "Forum" became "ForumE", for example. When I was done with that, I started up three laptops linked to my MSA, two of which had EdgeChromium Beta installed and one of which had never had EdgeChromium installed in any form. The three laptops synced correctly within minutes.

EdgeChromium: I repeated the steps I had taken with EdgeClassic (cleaned out most of the Favorites, set up the same 16/11 Favorites, and renamed, this time to "C" rather than "E", as in "ForumC"). When I was done with that, I started up the two laptops that had EdgeChromium installed (the laptop on which EdgeChromium had never been installed was irrelevant to this step, obviously).

What I found, to my surprise, was that the EdgeChromium two laptops did not sync quickly and accurately.

On the Favorites Bar, for example, some of the renamed Favorites showed up immediately, but others did not, and the results were inconsistent between the two laptops (e.g. "ForumC" replicated on all, but others like "AmzC" showed up on one but not the other, and others like "YmailC" did not show up at all).

Eventually, several hours and several browser restarts later, all of the favorites/bookmarks had correctly synced, but EdgeChromium sync is clearly not yet as quick or flawless as EdgeClassic sync.

More problematic, though, was EdgeChromium's sync behavior with respect to the deleted bookmarks from the "Other Favorites" menus. After 5-6 hours, some of those deleted bookmarks and folders had still not been removed from the laptop computers, and again the results were different on the two laptops. Sync would have eventually deleted all of the bookmarks, I assume, but I lost patience with the process at that point, and manually deleted the unremoved favorites on both laptops.

So something is not right with sync, even on the Beta build.

Based on these results and on the reports about myriad problems Dev and Canary users have been having with sync, I'm not confident that the EdgeClassic to EdgeChromium cutover is going to work either smoothly or flawlessly when the cutover happens in January.

I'll find out when it happens, I guess.  The good news is that all of the computers at the railroad museum are Win10Pro, so I can block the cutover until I've tested and have a migration protocol worked out.

@tomscharbach appreciate the time you took to provide the explanation for the testing done by you.

I guess they still have a couple of things to fix to make the sync work for the current enabled items.

Let's hope the fix is made & shipped in all channels before the general availability of the browser so it doesn't makes a bad impression on the users.

I don't know how they are going to fix it 100% before the stable release time.
they are already gone home for the holidays, when they come back to work, they will only have 1 week to figure everything out and i don't think it's enough time...

@HotCakeX"I don't know how they are going to fix it 100% before the stable release time."

I don't, either, and that's why I'm not confident that the EdgeClassic to EdgeChromium cutover is going to work either smoothly or flawlessly when the cutover happens in January.

It has seemed to me while now that Microsoft is putting too much effort into bells and whistles that affect the 20% who are advanced users, and too little effort into basic functionality (like Favorites/Passwords sync) that affects the 80% of normal users.

I'm afraid that the ship will sink on launch unless Microsoft gets the basics right.  The sync situation -- and the fact that several other basics aren't yet solved -- is very disappointing.

They can post an announcement and delay the release until version 80 in somewhere in February 2020.
not too late. but if they release it in january 15 and mess things up, then it will be too late.
1 Like
Reply