Edge has left Tab groups panel and right panels for Favorites and others. Web capture is a primitive tool at present. You cannot make screenshot of whole Edge window (very nasty omission).

My example below shows (simulation) such imaginable reality with En-Pl dictionary in Edge right panel. The screenshots presents too, a PIP window with web camera stream from La Palma isle where volcano is active for several days.

BTW I'm very fond of renaming Apps to Apps Manager and giving it a right panel. The same area used by Favorites (and others). I'd like the apps have the ability to be opened in that panel too. I described it in another post:

​Improving Apps - what needs to be done 1

Screenshot was made with external Bash script using xdotool and import (ImageMagick), but it should be done by Edge itself! 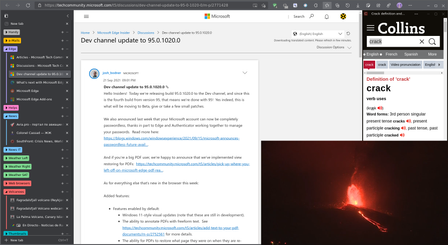