How about a version of Edge for MS Office Users

How about a version of Edge for MS Office Users

How about creating a version of Edge for users of other Microsoft products like Word, Excel, PowerPoint, Publisher, Outlook, etc.? Maybe something as part of MS Office 365?  Something with a similar Menu system to all the other programs?  Sure not everyone uses MS Office products, but there are a lot of people that do (at least I think there are lots of users).

Hi, welcome to our community!

I am glad to inform you that the insider channels for Microsoft Edge already have special capabilities for Microsoft 365(formerly Office 365) users. Such users have access to a plethora of features.

First comes the enterprise New Tab. The new Edge browser will have an updated New Tab page that is redesigned for enterprise users. It will allow users to access the most relevant Office documents, internal web sites, company resources, and other Microsoft 365 content.

There are more features: many for those who have invested in Microsoft 365 and/or other Microsoft Services. 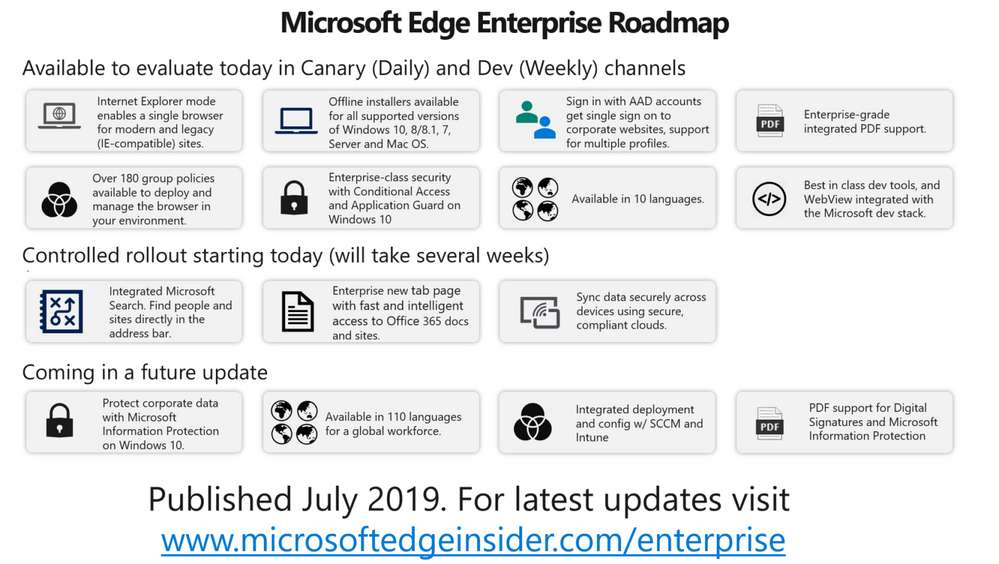 Visit this link: https://blogs.windows.com/msedgedev/2019/07/16/microsoft-edge-enterprise-evaluation-roadmap/ The image attached above is from the same link.

But does/will this have a similar interface (menu system) to the other Office programs or will Microsoft still insist on using an alternative interface (google chrome)?  The old IE interface was fine and similar to other programs, it is not clear to me why Microsoft changed.  Microsoft went for a radical change to the browser interface and said essentially, if you don't like it too bad.  How hard would it have been to allow the menu bar to be turned on or off according to the users preference?  It is not like the interface is "better", it's just different.  In fact I find it more difficult and more cumbersome to use.  But I fully realize that is not true of everyone----so why not make it optional?  Why make it different that all the other Office products?  Maybe the problem is Microsoft Managers view Edge as an entertainment product rather than a useful business product.  Thus the focus is not functionality and usability for those who use it primarily related to work.

Microsoft built the new Edge on Chromium. So, it isn't very easy for them to completely change the interface. They wouldn't have used Chromium, but the issue was compatibility. Since most people use Chrome, they appear to be fine with such a interface.

You must keep in mind that Microsoft is making the UI more similar to the original Edge than to Internet Explorer, which many corporate users use, for whom Microsoft has added an IE mode in the New Edge for viewing legacy websites.

For Office users, most of the interface will remain the same. However, the New Tab will be radically different.