I work on IT industry and I often use linux distros.
The main requirements for the browser is a support for various types of operating systems, like MacOS, Linux and Windows, because I need to sync my bookmarks, passwords and history between different platforms to continue my current tasks.
If Edge will not be available under linux, I will not change my current browser.

So, is there any chance to see Edge as native application on Linux?

I know, that at this moment there is no support for office and similar applications created by microsoft, but you could use shortcuts for web version (office online, one note online, etc).

You are doing a grat job and edge for android rocks, but no support for linux is dissapointing.

RE: Edge on Linux

Thank you for the suggestion, @InYourHead. I will definitely bring this feedback to the team. Elliot
11 Likes
Reply

Please keep us updated about their response !
5 Likes
Reply

@InYourHead I complety agree with  you.

I Would love to use the Edge in my Linux notebook.

@InYourHead   A true cross-platform Edge would be a real plus.  I use Windows and Linux on different computers, and Android on tablets.  I've kept dual browsers (Edge and Firefox) on my Windows computers because Firefox offers Windows/Linux/Android support, but keeping Favorites/Bookmarks/Settings in sync between the two browsers is a PITA.

I like Edge a lot -- it is my preferred browser and has been since Windows 10 was introduced.  The Chromium iteration shows tremendous promise, so it would be great, now that Edge is going to be based on Chromium, if Edge could be ported over to Linux, too.  MS seems to be moving in the direction of offering meaningful support for Linux, so it would be a logical step to take.

edge on all platform and i hope to see microsoft edition of android os for phone :D (the nokia x, xl and x2 dual sim whith android customized by microsoft are working better and fine cool perfect :D )
0 Likes
Reply

Linux Support would be amazing, Microsoft is already enabling Cross Platform Developer and user experiences with tools such as VS Code and more. I use Linux for my development work but also Windows for light browsing, editing and reading on  my tablet.

Currently, I am a Firefox user since it's supported on multiple platforms, but recently I did try the EdgeHTML based Edge and it's integration with the complete Windows experiences is a very different experience compared to all other browsers, moreover the PDF viewing experience is superior than the ones in any other browser.

I am sure with Chromium based Edge, Microsoft will bring some of the same goodness integrated to provide a seamless Web experience on Windows. But making it available on Linux is the only way I see using it for my daily work, as Sync capabilities are really important for me, and will allow me to switch from one OS to another knowing that all the important  things are going to be there.

I thought MS was ditching Edge for a more chrome type browser.  I could be mistaken however if MS does go with a chrome engine behind its browser then the support across platforms becomes much easier.  The main issues as I see it is Private code vs Public.  Will have to wait and see.

@Robert_Golobek   Edge Chromium (the browser under development to replace Edge Classic, the current built-in Edge) is based on a Chromium/Blink/V8 platform, the same platform on which Chrome, Vivaldi and a number of other browsers are based.

If that were all Microsoft was doing with Edge Chromium, it would be a simple task to prepare Edge Chromium for use on Linux as a Snap or Flatpak.

But Microsoft, as I am coming to understand it, is not simply building a Chromium/Blink/V8 browser, more or less vanilla, with a Edge-like UI.

Instead, Microsoft is porting over many/most/all of the features/functions that distinquished Edge Classic, tightly integrating Edge Chromium into the Windows and deploying enhanced/different video/streaming protocols, enhanced security, and so on.

I suspect that doing that will complicate Microsoft's path to porting Edge Chromium over to Linux, for obvious reasons.  However, to my mind anyway, Microsoft should port Edge Chromium to Linux (preferably as a Snap or Flatpak so that the port can be installed on particular distros without additional modification), just as it developed and deployed an Android browser for Android tablets/smartphones.

I realize that Linux desktop is a marginal OS, deployed on only 2% or so of desktop/laptop computers, and that so long as the energy in Linux desktop is  devoted to developing endless distros rather than focused on developing better GUI applications, that is unlikely to change.  But many Windows 10 users also use Linux desktop (most for work-related reasons, others just for recreation) and deploying Edge Chromium as a Windows/Linux/Android cross-platform browser would increase Edge Chromium's market share, it seems to me, and better align Edge Chromium with Microsoft's move toward open source and Linux support.

Perhaps you could be more specific as to why you want Edge on Linux. Is it just that you want something more polished than Chromium or is there a functional difference you are hoping for?

The ideal strategy for doing that would be to persuade all the browser providers to adopt the same protocol for managing bookmarks, passwords, etc. and provide the necessary cryptography to do this securely in end-to-end fashion in an open standards based protocol. This is in fact what I am currently working on, I am one of the original authors of HTTP and I have spent the past 25 years designing cryptographic security protocols.

Another strategy is to switch to a browser that supports the same protocol on every platform. Which is of course what most users do today and is the basis of the network effect that has everyone locked into Chrome.

As things stand, Microsoft has two options to break the lock in effect:

In my opinion, the second approach is more likely to be successful. As the new entrant, it is Microsoft that has the least to lose from moving away from the walled garden model and the most to gain.

Hey I still use Linux for most of my networking and back office coding.  Not to shabby an OS that has been around since DOS and is still free and publicly supported.

@Robert_Golobek   I use Linux desktop, too, deployed on a dedicated desktop (recreational, testing Solus Budgie) and a dedicated laptop (work-related for network diagnostics/maintenance at a railroad museum where I volunteer).  Linux is a great OS, with some limitations.

The primary limitation -- focus on creating endless distros instead of creating an environment in which applications will be more widely developed) is identified by the author of the article I linked in the previous post.  I note that Linus Torvalds said the same thing recently, at some length (for him).

I don't expect the perennially predicted "Year of the Linux Desktop" to materialize in my lifetime.  Of course, I'm in my mid-seventies, so that's not a high bar to cross.

I prefer FOSS, using Libre Office, Gimp and so on, and my comments about Linux's problems were not intended to trash either Linux or FOSS.

I'm in the exact same boat, I work in IT and therefore Linux is a must. And if I can't sync my browsing between _all_ my sessions, it's essentially useless.

Edge Canary blows Firefox away, but I just can't have it, due to the lack of a Linux build.

Which I'd be fine without, for the time being, but the fact that it's not even listed as a planned feature is somewhat worrying.

@Viktor Berke "Edge Canary blows Firefox away, but I just can't have it, due to the lack of a Linux build.  Which I'd be fine without, for the time being, but the fact that it's not even listed as a planned feature is somewhat worrying."

I noted that MS doesn't have any plans to port Edge Chromium over to Linux, too, and that's why I've been harping on them about it.

I understand that Microsoft has little or no financial incentive to support Linux, in terms of increasing customer base among Linux-only users.  I doubt that many Linux-only users, independent to a fault, are going to be any more enthusiastic about the Microsoft ecosystem that they are about the Google ecosystem, so will probably stick with Firefox.

But for those of us with a foot in both worlds, porting Edge Chromium to Linux would be an important development.  I'm not a Linux developer, but it seems to me that porting Edge through a Snap or a Flatpak would be a way to gather in some low-hanging fruit (that is, us) without expending much in the way of resources.

This is an amazing idea: really, it should be brought over. Edge C would be a perfect portal for Office Online and other applications.

I don't think it's "priority #1" for feature requests, but this would have major positive knock-on effects for the entire Edge C and Microsoft ecosystem.

Microsoft open-sourced calc.exe--surely, Edge C could be available on Linux.

@InYourHead   Microsoft is still mum about its plans, but there was an interesting slide in yesterday's build conference that suggests that Microsoft is going to port Edge Chromium over the Linux. 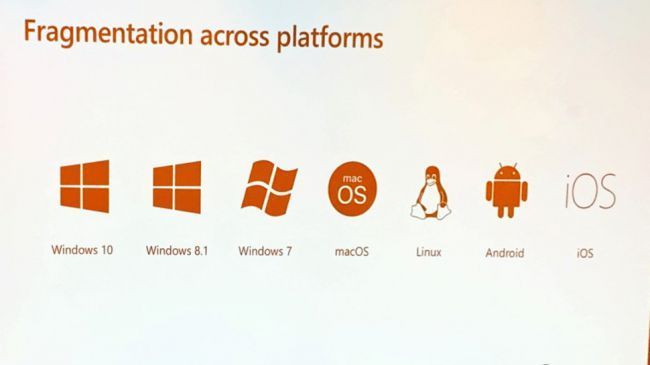 Microsoft has announced plans to port Edge to all of the others, so maybe our Penguin is getting Edge as well.

@tomscharbach  A Microsoft Edge Team member clarified Microsoft's position (somewhat) at the Reddit "Ask Me Anything" session late last week: "We don't have any technical blockers to keep us from creating Linux binaries, and it's definitely something we'd like to do down the road. That being said, there is still work to make them "customer ready" (installer, updaters, user sync, bug fixes, etc.) and something we are proud to give to you, so we aren't quite ready to commit to the work just yet."