For those who never or don’t use Chrome you can how far along and superior the upcoming Edge is compared to Google Chrome. Using the original source browser (Chromium) we can see how far Microsoft took it with just the drop down menu alone. The drop down menu bar is far better and more optional than Chromium’s (that's the same on Chrome.) The settings of Edge has a better font, and is more organized to use. As always Edge makes it more softer on the years to read, and user friendly to use.

Some of the options on the drop down menu are present in view on Edge compared to the original Chromium. "Extensions" in Edge is right there between Apps and Collections where as in Chromium/Chrome it's under a sub-menu called "more tools".  The extensions in Chromium are nicely spaced out in Edge compared to Chromium/Chrome where's jumbled together.

So we see from a side by side comparison of just this one item alone how far and nicely Microsoft has taken the Chromium engine and expanded/improved upon it. 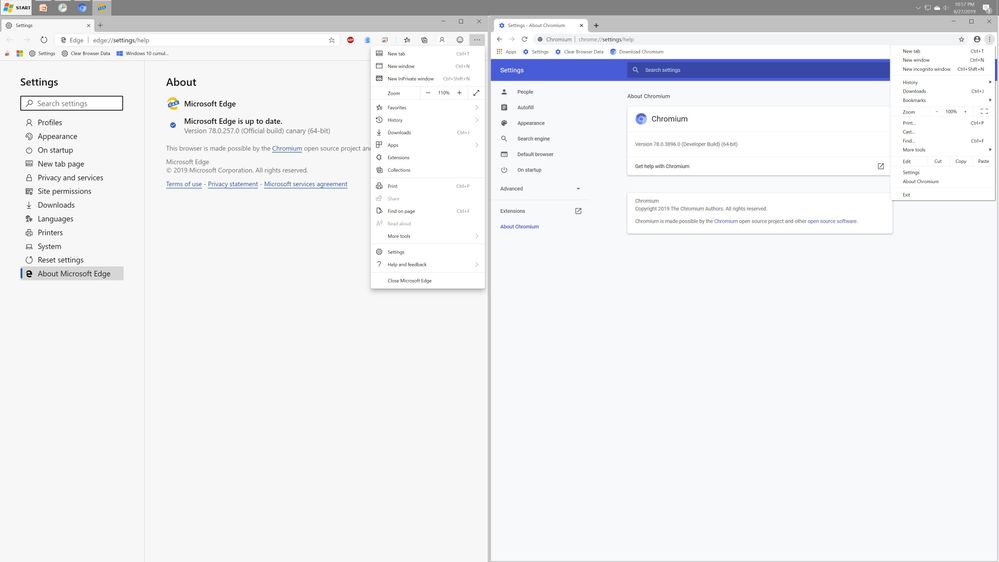 Good stuff.
one more thing i hate about Google Chrome (not chromium) is that Google partnered up with Eset to integrate their lame antivirus into the browser.
they didn't even put it up as a poll or asked anyone to do it, they just did what they wanted.
if i were to choose the antivirus to be integrated into the google Chrome i would choose at least something as decent as Kaspersky, definitely not Eset.
i definitely don't want the Eset antivirus or even a small part of it on my computer when I have Microsoft defender already on Windows.
Google is just tooo desperate to take on Microsoft in market share. they wanna force their way into consumers' ecosystem. they recently partnered up with Dell to produce enterprise laptops of their chrome OS. it's just ridiculous.
another great feature i notice in the screenshot is the UI. on google chrome i need a magnifier to even see the UI, but Edge insider made it all bigger to be the right size and also touch friendly.

@HotCakeX - Yep, I agree. Right now I have Chrome Canary and that is only to compare with Edge Canary. Edge is my default. As Chromium doesn't have an auto updater feature and it's just a pain to manual download every time to use the newest build (unlike Edge Canary that's updated once a day, Chromium is literally updated up to 40 times a day...usually a new update every 30 minutes but I like how bare bones it pretty much is).  https://download-chromium.appspot.com/

I prefer the new Edge (even the old Edge and in it's golden day IE) over Google Chrome. Plus I hate how Google bloatwares their android phones or partnership phones with irremovable Google apps (and were talking around a dozen) without giving the owner the option to uninstall only able to disable. I've encouraged a few people to switch over from their Google Chrome to Edge Dev and they already prefer the new Edge and it's not even out of Beta.

Thank you, @ItalianAce we're really glad you like what we've done with the place.  We are still planning on more, so keep your eyes peeled, and let us know if you think that we are still on the right track! Thanks - Elliot