Another request for getting the favorites button back from classic Edge.

It was one of the things that made edge a lit better than chrome on a tablet.

Therefore the "old" button is needed. If the display of the button can be controlled through a setting it would please both the ones that wants and whose that don't like the button.

On a longer term I would like to see all of that toolbar - it makes Edge unique - nót just a Chrome clone.

I agree. People who speak mainly English read left to right. The bookmarks panel on the left keeps the visual movement intact of moving left to right. People who have studied this say starting the visual activity in the same direction is mentally more efficient. This is why numbers and alpha are on the left. Paragraphs begin on the left. And thus, moving from a bookmark to the corresponding text should remain left to right. Placing the bookmark panel on the right is counter to English speaking people. For those in certain Asian and Arab countries who use right to left writing, then they should have the option to read their browser according to their language.
0 Likes
Reply

This is absolutely the way to handle it. I work for a global energy company. Our campus in Houston has 8,000 employees, and tens of thousands scattered around the globe. Having to move hundreds of project-related bookmarks around is common. Trying to do that with the internal jso database is next to impossible. Keeping bookmarks (favorites) in a folder in the Explorer allows corporations and businesses to manage large numbers of bookmarks in bulk. Plus, it's easier to go directly to a specific bookmark inside the Explorer and modify it's properties instead of digging down through the database inside the browser itself. We often need to modify bookmarks and move them without even opening the browser. It is common for us to move large folders with bookmarks from person to person, project to project, and job change to job change. Otherwise we would have to insert thousands of bookmarks into each computer in our offices and force the individual employee to sort it out. That's an impossible task. If at all possible (and I know it is) please try to incorporate an easy system - such as the favorites folder - for bookmark management.
0 Likes
Reply

"Windows File Explorer is the model [when FE is repaired to function as File Explorer should] with full respect for tree and folder layout, and the ability to select and copy, move, paste and/or drag and drop just like File Explorer." TOTALLY AGREE SANTABARBARA ! If the New Edge is being developed just for home users and mimics the existing Chrome clones, then use it as it is. But if the new Edge is to be marketed as the Go-To browser for business, then is has to have an efficient way to manage the bookmarks, such as the IE-11 system. Being able to manage hundreds, even thousands of bookmarks together through the File Explorer is soooo much better than having the open the browser and dig down through the hidden database just to find a single bookmark.
0 Likes
Reply

Elliot, here in this thread is more, again, speaking to wanting things that are part of (current) Edge... its toolbar icons, and Favs handling that make it special & cause people to like it & use it.  Set aside, Add notes, Favs et al, Share.  AND ellipsis things opening as fly-out panels NOT, changing to another page. We are given to understand all this IS going to be in Edge C.  Point is, it is easy to see, from threads likes this, the large number of Users who VERY much want these Edge things to continue to be Edge things.  We keep reminding Folks we are in early stages.  But, it is understandable they can be 'nervous' when they are not seeing these items that they feel are absolute parts of Edge.  It must be given attention & respect that there is a liking, a preference for (current) Edge style & approaches to things.  There are Edge Features, that concern people when they seem to left by the wayside.  Stuff not even listed under "Coming soon", makes the concern understandable, also, in regard to this (same) bunch of stuff being mentioned & addressed, again, in yet another thread.  Can improve the under the cover guts, but, having Folks without things they like, use & want is not/would not be an improvement the majority want.

Theses things may well be coming, still, the re-occurring similar comments & sentiments are not surprising (until they are seen).  And it clearly shows MANY are VERY passionate about having what has come to be viewed as "Edge things"... not Edge without them... not the Edge people know, like & want to have consistency of Features & Functionality as we transition to a new version.  As long as this is taken seriously by the Team, Folks should end up with an appealing, exciting product.

Without those buttons - it's just a chrome lookalike

With them - A better browser that combines a rich pluggin store with the quality of the classic Edge Gui.

Right now I have two things that blocks a switch from classic edge.

* The ability to block webpages (Youtube) from hijacking the right click menu. For this I have found a dirty workaround - sending IE agent string

It seems like it's added, to see when it's available https://forums.mydigitallife.net/threads/microsoft-edge-chromium-based.79237/page-69#post-1540824
0 Likes
Reply

A  few users seems to have gotten it in Canary but its not even standard there. We are trying to get MS to understand that they should implement it for both Canary and dev and for all users -  last week

There are a number of "Edge" things which, the Team has been hearing about (from Insiders) for quite a while. The message conveyed has been that it is all coming, though, may come piecemeal.  And, it has been alleged that it will all be there by, actual, release time (non-beta).  Obviously, there are heaps of people hoping this comes to pass.   (Since we keep hearing the same (missing) things mentioned repeatedly.  Reckon the Team surely must be hearing the same things (from us) and are acting on it. (We hope).

No news for the Favorites button ? Apart from the "screen" I posted above
0 Likes
Reply

You can activate it from the bookmarks or settings submenu

to be specific and clarify, the current Edge method is faster and a nicer method -- a better UX. It also makes sorting faster. Win-Win. But it requires that toolbar icon (#1 in the attached image ). Also, note that the "Favorites Bar" is a folder in Favorites and not expanded by default. 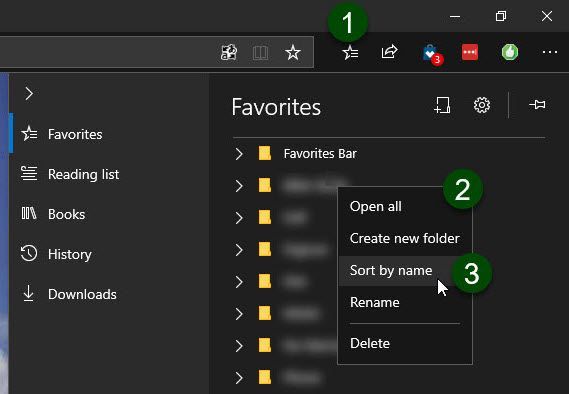 @Cyber4 And this is exactly what they need to carry over to Edge Chromium.

I do not have this menu with Edge Canary in French (favorites button)
Available only with Canary in English ?
Thanks
0 Likes
Reply

I am trying to find or figure how to enable

, too. (so far, I don't see it, either, even w/ English).  It shouldn't matter whether French or English.

Thank can only be done in a clean manner by maintaining the Favorites folder in the File Explorer. You can drag/drop, change properties, rename either singularly or in bulk, even create new folders on the fly. And all of that is immediately reflected in the browser. IE-11 does that and it's the main reason large corporations are hanging on to that old browser … not for the browser itself but for the efficiency of managing hundreds, even thousands of favorites. When a new employee comes on and gets his computer, or an employee is transferred to a different unit, favorites are preloaded according to his project/department/rank, or whatever category he fits into. Trying to manage all of that through a hidden database instead of a front end folder will keep Microsoft Enterprise customers fuming.
0 Likes
Reply

is coming to Edge C. Should see it fairly soon.  At least this is my understanding.  Hang on a bit longer...  The Edge top bar items are allegedly being put in Edge C albeit, piecemeal.

Supposedly it is coming.

Thank you all for your feedback on favorites!  We understand how personal favorites are and are trying to get the defaults right, while offering the customization that you are asking for.  The latest change in this process is the addition of a more vertical favorites button that opens a fly-out.  This change is only in Canary right now, but should make its way into this week's Developer channel update.  The visibility of the button is controllable, so you can hide it if you don't want it cluttering up your browser's main interface.

We have also heard the feedback around the need to edit favorites offline, or push them out as part of an organizational change.  If you can, we would love to know more about how you do this today.  Do you use Active Directory to manage your organization, or just manually push out a series of favorites?  How many levels would you need, and how would you want to see those level depicted?  Would you expect that organizational favorites merge with personal favorites, or displayed in special folders?  Would you expect them to be read only, or would a user have the ability to manage (edit, reorder, delete or add to) them?

Thank you for taking the time to give us your feedback, we really appreciate it and use it!