Hello, I use Bitdefender and keep getting the following text notification when i open edge..

Suspicious connection blocked
6 minutes ago
Feature: Online Threat Prevention
msedge.exe attempted to establish a connection relying on an expired certificate to extensionwebstorebase.edgesv.net. We blocked the connection to keep your data safe since websites must renew their certificates with a certification authority to stay current, and outdated security certificates represent a risk.Add to exceptions

I contacted Bitdefender and no fix could be suggested.

Any of you guys know what may be causing this, it is a bitdefender notification but only comes up as soon as I open Microsoft Edge.

Here is a screenshot of it. 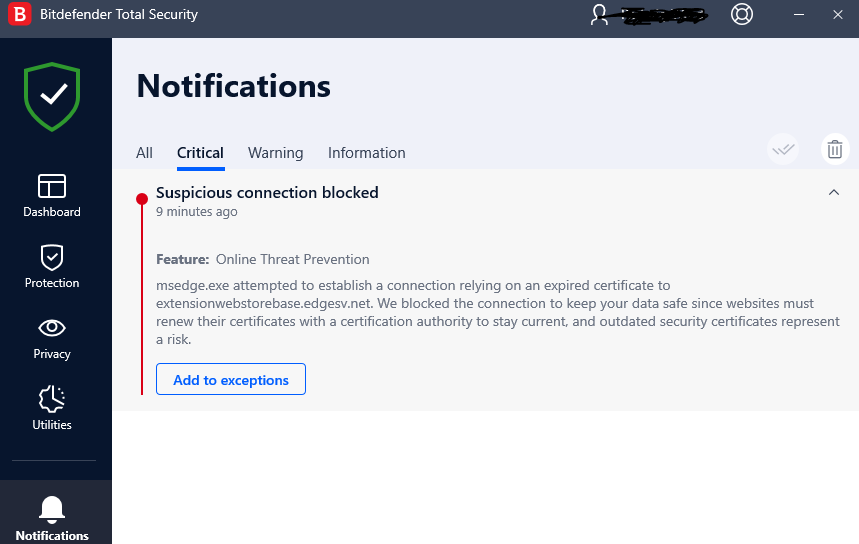 This issue has been widely reported in the last week or two.

According to responses in other discussions concerning the issue:

(1) The extensionwebstorebase.edgesv.net domain is obsolete, which is why Microsoft allowed the certificate to expire.
(2) Edge, for whatever reason, still calls to the domain with respect to some extensions.
(3) The Edge Team is pushing an Edge update to eliminate the issue, without an ETA known at this time.

Unless you are willing to work through your extensions one by one attempting to find the culprit(s), I suspect your choices at this point are to (a) whitelist the extensionwebstorebase.edgesv.net domain in Bitdefender or (b) put up with the error message until the necessary changes have been made in Edge.

@tomscharbach - It's now been almost 6 months since I first saw this reported. It would seem Microsoft for some unknown reason has decided this isn't important enough to them, to fix. For all of us who believe security is very important this isn't expectable. It sure is good to know that most if not all of the other web browsers I've tested don't seem to have this problem. I really like Brave, Firefox, Chrome, etc.. While Microsoft really does have some good applications their web browser needs some tune-ups.

Agree, very annoying and completely unnecessary if Microsoft would just roll out an update to fix this.
1 Like
Reply

MY bitdefender keeps telling me msedge.exe attempted to establish a connection relying on an unmatching security certificate. I would have expected MS would have fixed this by now.
1 Like
Reply

So uninstalling msedge is the only solution? Why would this do not happen with other browsers?

I finally just allowed it as safe on Bitdefender a few weeks ago and haven't seen it since and have no problems with my computer.

The same today and on the 07/30/2022.
I have chosen the solution of rhonda90402.
It is quite boring to have to write several times about such subject.
We have many things to do elsewhere.
Best regards,
Trebly (here Trebly but Trebly_auth on others MS Community... doubled?)
0 Likes
Reply

Trebly,
No issues still on my computer since I allowed it still in late June/early July.
0 Likes
Reply