After being updated to the new Dev build 77.0.223.0 any other trace of the old Edge has disappeared in the start menu as well as in search. It still shows its installed via Settings-App.  The only way I could start it was by changing the Default Apps back to old edge and clicking a link leading to the internet from settings app. Is this intentional?

@derekamoss  I am unable to replicate the issue on any of the three computers on which I'm running Dev 77.0.223.0.  Both "Microsoft Edge" and "Microsoft Edge Dev" show up in the Start menu.  You might consider contacting Microsoft Edge Support.

tested it on multiple computers and the same happens. Wrote a thread on reddit about it and other people have the same problem. Are you in the windows insider program? Maybe thats the difference

@derekamoss "[I] tested it on multiple computers and the same happens. Wrote a thread on reddit about it and other people have the same problem."

I don't doubt you, but I'm not seeing those results.

"Are you in the windows insider program?"

It could be.  I've read articles to the effect that Microsoft is taking steps to depreciate EdgeHTML in recent 20h1 Windows Insider builds, and if you and the others are testing 20H1, that might be reason why you are getting the results you are getting and I am not.

However, if the change in behavior occurred upon upgrade to Dev Version 77.0.223.0, it could be a bug, and it might make sense for you to report the issue to Microsoft Edge Insider Support (as well as Microsoft Windows Insider Support) so that Microsoft can get on top of the issue.

Really would have been nice to point this happening though. I had figured that was what it was but figured it was to early to start. Assumed they would wait at least till beta flighting to do this. Thanks for the share though. I see it mentions release preview which is exactly what I am on.

@derekamoss Yes they should have but may be beta is right around the corner.

@CodeDJ "Really would have been nice to point this happening though. I had figured that was what it was but figured it was to early to start. Assumed they would wait at least till beta flighting to do this."

It has been clear for a while (based on a number of articles I've read in the technical/trade press) that Microsoft intends to make Edge Chromium the default Windows browser beginning with 20H1.   Although I wasn't aware of the article you linked, it doesn't surprise me that Microsoft has moved Edge Chromium to default status in the Windows Insider builds.

Isn't the more relevant question, though, where 20H1 is along the alpha-beta path than where Edge Chromium is along that path?  After all, 20H1 is predicted to be a major release (unlike the "service pack" release coming this fall), and it seems to me that the sooner Microsoft starts testing Edge Chromium against 20H1, the better.

I'm not a active Windows Insider at present, though, so I defer to those who are testing 20H1.

No I get you but it would have been nice to let us testers know that it was happening is some build note or blog. Also the article isn't entirely correct either. It says it was pushed by cumulative update build on the release preview .266 where as i was on .264. So somehow Microsoft managed to do it behind the scenes.

@derekamoss "No I get you but it would have been nice to let us testers know that it was happening is some build note or blog."

Yup.  During my time (about two years) of active involvement with the Windows Insider program, communication wasn't exactly Microsoft's strong point.  I guess that hasn't changed.

@derekamoss and other folks - thanks so much for reporting this and the information you've provided so far. This is not the behavior we want to enable for users right now, Insiders or not.

If you are seeing this on your device, can you provide a few pieces of information?

Update: we believe we've identified the issue here and hope to fix this soon. Thank you so much for helping to identify this issue before it went out to a broader population!
0 Likes
Reply

no problem and honestly I actually like it lol so sad to see it taken away.

Following up here, if anyone gets into the state where the existing version of Microsoft Edge is hidden in the apps list in Start menu and from search results, a temporary workaround (while our fix gets rolled out) is to uninstall the Canary or Dev versions of the new Microsoft Edge.

If there are any questions, please let me know.

they way i fixed it actually was going to default apps, putting old edge as default, clicking on of the web hep links in setting and pinned it to the taskbar so you can have both.

@JTKimbell  "Update: we believe we've identified the issue here and hope to fix this soon. Thank you so much for helping to identify this issue before it went out to a broader population!"

I think that the problem expanded with the introduction of KB4505903, which is to suggest that we are advancing backwards.

So whatever else happened, it looks like the error may have been released into the wild, so to speak, by KB4505903.

In response to your question regarding Windows Insider participation (which might or might not be relevant at this point), I am a member of the Windows Insider Program, but am not currently testing any Insider builds on any of my computers.  I am running the production 1903 version on both computers I'm using to test Edge Chromium. 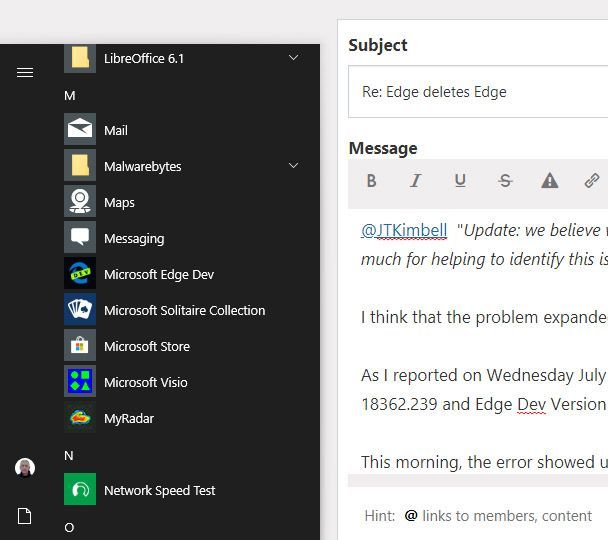 This happens to me too. I'm on Windows 10 insider build 18945 and Edge Canary "replaced" the old Edge. I'm fine with this move though, just reporting here
0 Likes
Reply

I have confirmed that installation of KB4505093 triggers the "Edge Deletes Edge" behavior, as I suspected yesterday.

BEFORE the KB4505093 update, both EdgeHTML and Edge Chromium show up in the Start list: 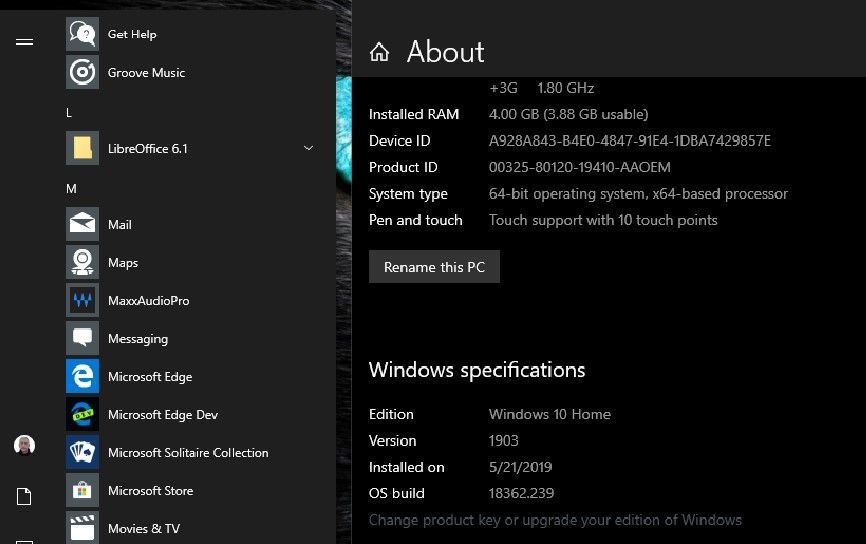 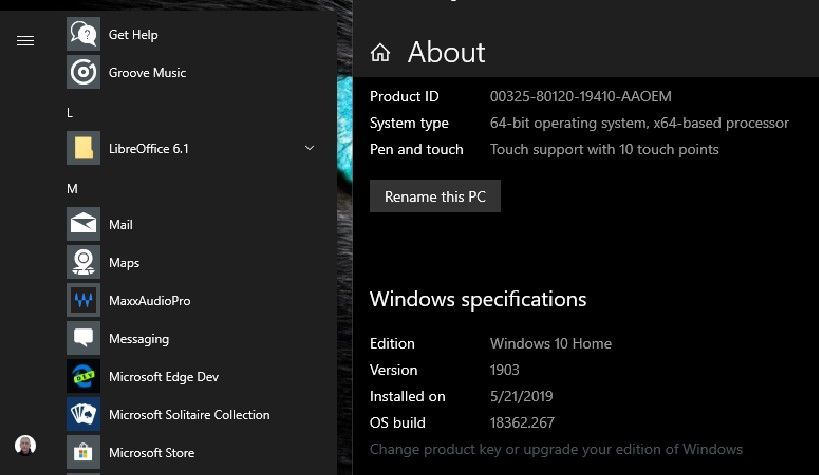 @tomscharbach Thanks everyone, this matches with our understanding and expectations. This feature has been turned off for some users, and even though some of you like this experience, we'll be rolling it back in another update for everyone else.

Appreciate your help and the details.

I need the old Edge back again. In the previous Edge I used a specual Htlm program which is not functioning any more with the new Edge. I don't use Edge anyway except for this htlm program.

What can I do to get the old Edge back ?

Living in a non-English country. Cannot get MS Edge to open in English by default