if Microsoft Edge dev is another similar Chrome, What do you choose? @all

I prefer IE, and current Edge. Not Edge dev.

if edge chromium isn't in beta is because, the curent edge insider is in heavy development
IE -> the worst browser ever
edge -> not bad it would have taken more user if it had manage the extensions from the beginning as now (with a bridge to carry the extensions).
I will chose Edge (chromium)
0 Likes
Reply

Hi @liuyuqi, one of the great things about browsers is that there are so many to choose from.  Just because a browser is built off of the same rendering engine as another browser does not mean that they are the same at all.  Microsoft Edge may share a number of features with Chrome, but there are very important differences that need to be taken into account.

@liuyuqi  "If Microsoft Edge dev is another similar Chrome, What do you choose?"

I don't think that Edge Chromium is going to be "another similar Chrome". Major differences between Google Chrome and Edge Chromium are already emerging, two of which come immediately to mind: (1) Microsoft has removed most components tied to the Google ecosystem (see below), and (2) Microsoft is baking anti-tracking protection into the browser, something Google has indicated won't be happening in Chrome. 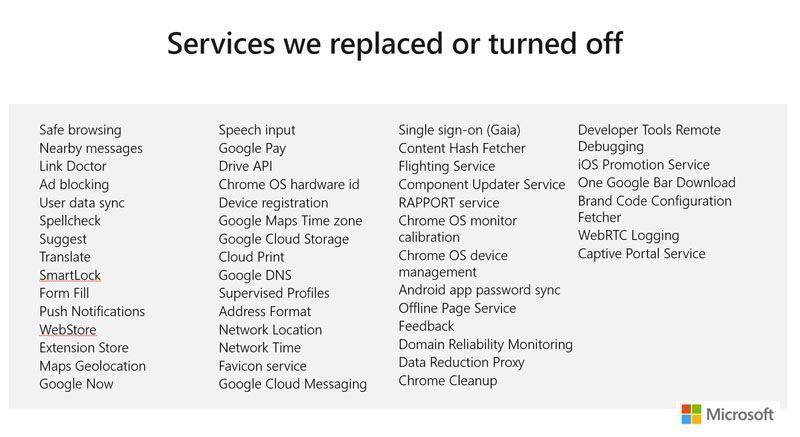 In addition, Microsoft seems to be building EdgeHTML features/functions noticeably missing from Google Chrome into Edge Chromium, and I suspect that we will see a much cleaner, sharper UI than Google Chrome's UI, which is, well, as bland as hospital food.

So I don't expect that I'll have to make a choice between bland and blander, but if Edge Chromium does end up being "another similar Chrome", and I had to choose between the two without other choices (e.g. Firefox), I'd choose Edge Chromium because it will not be tied into the Google ecosystem.

@Elliot Kirk  "Just because a browser is built off of the same rendering engine as another browser does not mean that they are the same at all."

That's for sure. Chromium-based mainstream browsers (Brave, Colibri, Google Chrome, Opera, Vivaldi) are quite distinct in terms of features/functions/UI, and Chromium-based niche browsers (e.g. Blisk, Colbri, Epic Browser, Iron Browser, Avast Secure Browser, Yandex, Torch Browser, and Comodo's Dragon, among the many) push the limits of forking off the Chromium base. And those are just the tip of the iceberg.

@Elliot Kirk  "Microsoft Edge may share a number of features with Chrome, but there are very important differences that need to be taken into account."

That is certainly what we all expect and hope to see as Edge Chromium develops.  I think that the Edge Team is doing a good job so far, and I expect to see a lot more coming.

@liuyuqi Chrome & Edge Chromium will never be the same. They just share the same code base, but it's different work on above of the shared base. Many members have said some good points above, which I would not like to repeat now, I stand by their points...

I will choose for Edge Chromium over Google Chrome always.

You are right, Google,Opera and other browser all fork on Chromium. But a really fact is that other browser has slowly disappeared.

I rarely use QQ Browser, UC Broweser,Opera Browser. all of them has new feature, such as download video,  speed up visit website.  sync data.

I had install IE, Edge, Firefox, Chrome, Edge dev. five browser!! But I only want use one! and uninstall the others. what should I do? can you guess?

I think that other people have the same choice problem.

Moreover, by forking, they separate out the engines, and work on their own feature sets. Microsoft, here with the Edge browser will be contributing to the Chromium as well, and will work towards the betterment of the web, and will make it an equal participation between the 2 corps, making it better for everyone for Chromium.

keeping all these things in mind, I would like to make it a vote towards Microsoft Edge.

I can said you if you are a dev, take chrome, firefox and edge for your test.

@liuyuqi  "I had install IE, Edge, Firefox, Chrome, Edge dev. five browser!! But I only want use one! and uninstall the others. what should I do? can you guess?  I think that other people have the same choice problem."

Browser selection is a matter of choice.  No one needs five browsers.  Pick a primary browser and a secondary browser for daily use and remove the rest.

I use EdgeHTML as my go-to browser in the Windows 10 environment because it is secure, efficient and has a UI that I like.  I use Firefox (and have for a decade) for legal and technical work because it is available on the three OS platforms I use regularly (Android, Linux, Windows) and has the best Reading View available.  Firefox is secure, cross-platform, eco-system independent, and has good anti-tracking tools.  Firefox is where I keep the bulk of my bookmarks/favorites, keeping only a couple dozen frequently-used favorites in EdgeHTML.

I don't use IE under any circumstances (and, in fact, remove IE from Windows functions/feature, and have encountered no problems at all since that choice became available) because IE is based on legacy technology, with associated privacy/security risks.  I don't install or use Google Chrome because Google Chrome is a front-end for Google's data-mining operation, and I want as little to do with Google as possible.

I'm testing Edge Chromium (Dev channel) and will use it as an EdgeHTML replacement if it meets the minimum security/privacy/functionality requirements (discussed in other threads).  If and when Edge Chromium is ported to Linux as a flatpak or snap, I'll consider using it as my only browser.

Those are my choices.  Yours are up to you.

There is nothing wrong with having choices.  The trick is to make choices.

You can try out the Google version of Chrome Dev. It's called "Chrome Dev" and compare it side by side with Edge Dev. I'm a long time Chrome beta browser tester with their Canary version as their beta program has been going on open source since 2008. I've also been using Edge since day one back to when it was IE 1.0 on Windows 95. Edge is my default browser. Microsoft is simply following the same path Google is following with their beta testing down to the same names. I've been testing with both the Edge and Google Canary side by side in recent and it's fun to do. Been beta testing with Google Canary for years.

Since it's been reported Microsoft is working with Google engineers I see no conflict of interest posting of such comparison. I can say though Microsoft version is better.  I can proudly say that as I write this post I'm using Edge Canary!