As someone coming from Edge and hasn't used any Chromium-based browser for years, the different hotkeys setting (such as Ctrl+Shift+P brings up a InPrivate window in Edge but the Print dialog in Edge Beta) is pretty hard to adjust. Is there a plan to allow Chromium-based Edge to use the same set of hotkeys as the original Edge? Or at least a way to remap them?

The old Edge is based off of Edge HTML code/source (Microsoft's own engine) while the upcoming (now Beta versions) of Edge is based off the Chromium Project. Google Chrome and Edge Chromium (along with some other browser makers) are sourcing off "Chromium" edge, so why the hotkeys are different than Edge HTML but more or less the same as Chrome. Edge Chromium is putting a far better slant on things though. I don't know if MS can add in the hotkeys used in Edge HTML as it's a different source code/engine than Edge C, but the hotkeys for Edge C is about the same for Google Chrome. It's a matter of just getting use to the new Edge C hotkeys for those transitioning from the old IE/Edge. For those transitioning from Google Chrome there's isn't a lot of different in that area and they'll feel right home even to the point of easily and smoothly transitioning over from Google Chrome to Edge Chromium. Even accessing flags is the same such as "chrome://flags" compared to "edge://flags".  Mozilla is on their own engine called "Gecko" for their Firefox browser. Gecko was used in the later versions of Netscape, and is also used by Lunascape and Waterfox. Here's is a picture I snipped of Google Chrome and Edge Chromium menu side by side and as you can see the hotkeys (and in many ways the menu) are the same: 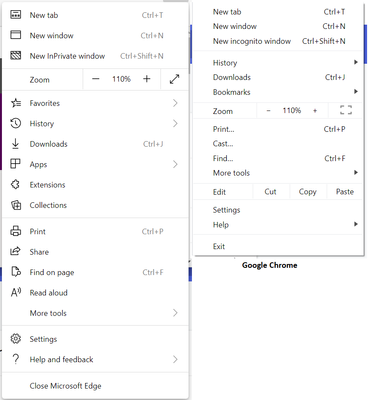 On a side note the Opera Browser is also using the Chromium engine. As you can see the menu tab is about the same as Chrome and Edge Chromium, and uses the same hotkeys. So people transitioning from Opera to Edge Chromium will have an easy at home transition to Edge. Although Opera has only about a 2 percent user base. 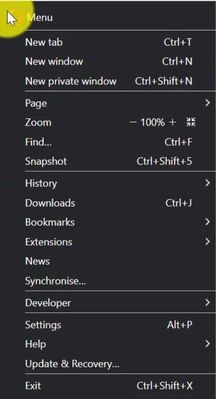 Yes, Jim, there are some that are new & or different depending on past reference. Most that are familiar do work across all of Edge, Chrome & more.  So, yes, may have to live with this, but, the learning curve is slight as, there are indeed, only a few to learn/memorize anew.  Some such details may be dictated due to being on a Chromium platform rather than HTML.

As an aside, I tried the Mouse Gestures for a while from the Chrome Store.  That was fun, in the same vein, since they are not, at all, the same as MS Store Mouse Gestures which, isn't available for Edge C.  I'd keep, for the longest time, doing gestures out of habit that did nothing or the wrong thing LOL

by virtue of being on a Chromium rather than HTML.

Making the new Edge more like the current built-in Edge and less like Google Chrome would be great.
0 Likes
Reply