Hello Insiders!  Today we’re releasing build 90.0.803.0 to the Dev channel.  We’ve got some cool things to talk about up front, and here they are:

As for everything that’s new feature-wise:

As always, we couldn’t do all this without your valuable input!

by the way, me and lots of others in the forum are still waiting for Chromium in Edge mobile to be updated, someone in a reddit AMA said few months ago, like +6 months ago, that they are doing something, it wasn't clear, just a generic response.

I wanted to know if there is any update on that.

Edge mobile using Chromium 77 while the latest version currently is 88 and soon 89 and so on.

@josh_bodner I don't see Kids Mode in the latest Canary, so I guess that's why it wasn't mentioned in this post.
0 Likes
Reply

@Kam wrote:
I don't see Kids Mode in the latest Canary, so I guess that's why it wasn't mentioned in this post.

it's very limited at the moment, by default not even available outside US.

the only reason not outside US (in my opinion) should be the top sites they choose for NTP and lack of some localization.

it is available on Edge canary with this method , works on any region/IP address, but you can try it on Dev too maybe you'll get it.

The problem with subsequent middle-clicks after the first on favourite bar drop-down menus not doing anything seems to be fixed, which is good. For me, desktop Edge of itself is now back ahead of Google Chrome and at least equal with Firefox.

Unfortunately it's not a matter of desktop Edge on its own - I need a desktop and an Android browser pair that work and sync together, and Android Edge languishes in the Chromium 77 doldrums without anything still appearing to have happened other than collections in over a year. It's completely unusable for me. For one thing, I have to have the ability to dark-mode  websites, like Android Chrome's option to have a settings-themes switch to darken websites, or - much better - Android Firefox's ability to use the Dark Reader extension. Far too many websites I go to have blinding white backgrounds, and without some darkify ability in Android Edge I just can't use it - even test it for anything else.

For another, I HATE bottom controls. And I'm not the only one. Note that Android Google Chrome for awhile had an experimental setting to have a split top and bottom bar very like Edge's. Some time ago now, Google removed it so one would presume it wasn't successful. And when the new, re-written Android Firefox was released as a preview in autumn 2019, it just had bottom controls. I wrote a review in the play store that I wouldn't be able to use it with bottom controls, and I don't think I was the only one because 3 months later an option to have bottom OR top controls appeared, well before stable release. I'd think about this, if I were you if you want Android Edge to get any significant traction.

You really need to pull your fingers out with Android Edge - it's dragging as an anchor behind desktop Edge, working against Edge adoption.

Just want to give feedback, the BETA version of Edge that we are improving, is way faster than the normal one, however, it is freezing a lot.
0 Likes
Reply

@Shaurya2205 wrote:
Just want to give feedback, the BETA version of Edge that we are improving, is way faster than the normal one, however, it is freezing a lot.

What are your system specs?
using insider version of Windows 10?

Why is the deduplication issue still on the issues list? I thought deduplication made it's way to stable so shouldn't this issue be gone now?
0 Likes
Reply

@josh_bodner Still encountering the "White Screen" issue on Edge Dev startup in 90.0.803.0. Are you and the team still looking for GPU logs for this or any other logs? If so what's best way to share?

Have uninstalled and reinstalled Microsoft Edge Dev and sync now appears to be working.

I want ask something.

When Microsoft want fix the installation path on Windows?

I hope you're hear about my feedback.

I have a big issue with the last update on dev channel. 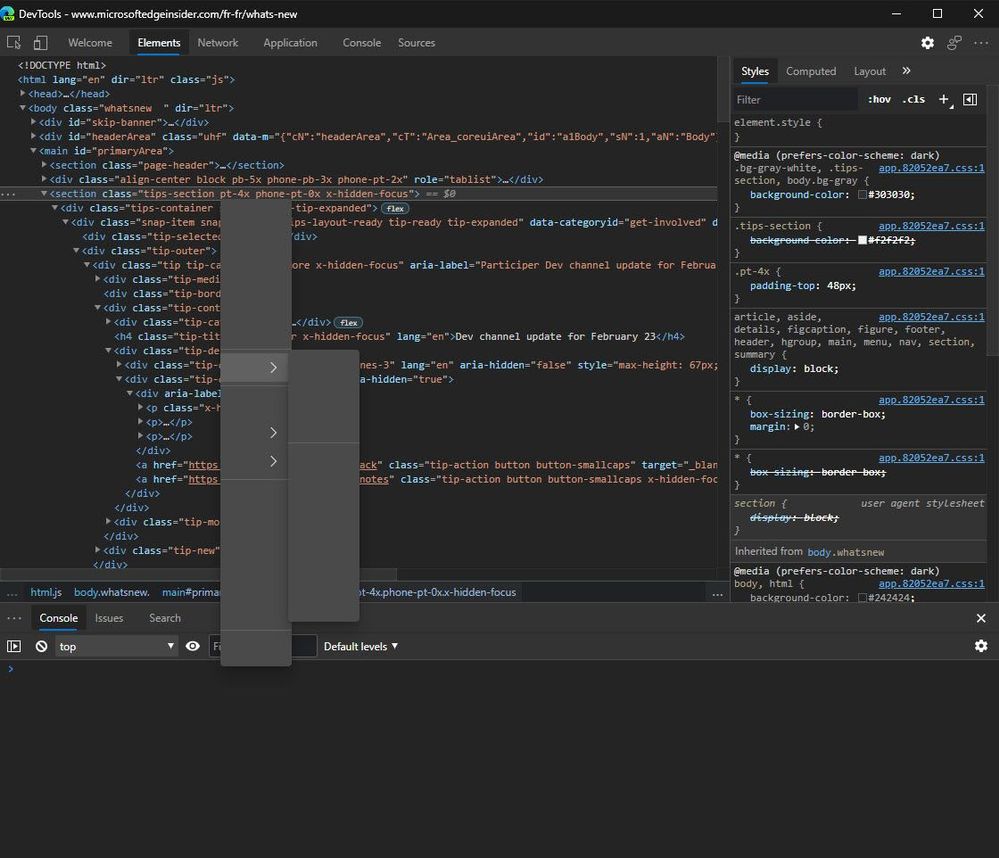 This has already been fixed in Canary 90.0.804.0. I even assumed that the next dev version would be exactly 804, but for some reason they chose the broken 803

When starting the browser, the window stays empty for some seconds. I also get this error message:

"Profile error. Some features may not be available. An error has occurred."

If I confirm this with ok, everything actually works. I've signed out and signed in again, deleted all data, but the problem persists.

Thanks, as mentioned in my reply this is how I was able to get sync working.

Interestingly, it now correctly syncs a work profile (when had stopping syncing for a while) as well.