Hello Insiders!  Today we’re releasing build 87.0.664.8 to the Dev channel.  This is the last build for major version 87, so except for maybe a small patch or two, this is the build that will soon be going to Beta.  We have one important known issue in this build that’s actually a fix for a previous issue.  A couple of weeks ago, people who were expecting their session to be restored, either because they have Edge set to start up with their previous session or they intentionally checked for updates in Settings, lost their sessions.  Today, the bug that caused that behavior has been fixed, but the fix causes the exact same behavior.  If you’re in that group of people who lost their tabs, there’s a good chance they’re recoverable.  Go to … > History, and look for entries in the “Recently closed” section that mention multiple tabs, since they will restore entire windows.  Other methods, like the ctrl + shift + T, should also work if done right after Edge is opened.

Canary users should also check to see if they’ve been signed out of the browser.  A bug over the last week may have caused that to happen, which will also affect features like sync that rely on being signed into the browser.  Now, for everything noteworthy that’s been added this week:

Last week, major version 86 was promoted to Stable, so be on the lookout for that!

Thanks for the update, glad to see all those bugs got fixed.

It seems that after updating I lost all 150+ tabs (I know it's a lot) and they do not appear anywhere in recently closed tabs. The only tab that was loaded was the "We updated you..." landing page. Did I misunderstand that they should be in there as tab groups with this new bug/fix?

Is there any way to recover my lost tabs? It's going to be difficult to individually find every tab I was keeping.

It seems that after updating I lost all 150+ tabs ... The only tab that was loaded was the "We updated you..." landing page.

Me too. However, I found Reopen closed window on the window control menu (right-click on the 'title' bar or press Alt-Space). It opened a new window with all my 30+ missing tabs. I don't know how long the option stays there; I was pretty quick in panic mode.

@Noel Burgess when I try that it only opens the same window (tweet deck PWA) over and over and over. I tried it maybe 30 times to see if it would go back any further and it doesn't. But thank you for the suggestion.

@Ryan Buckwalter Ah, that's unfortunate.  We've been working on removing PWAs/Apps from the recovery logic for that exact reason:  sometimes it picks up the app windows and not the main one.  Is the list of recently closed windows in edge://history/recentlyClosed any bigger?

@josh_bodner After the update the recently closed windows list in edge://history/recentlyClosed was completely blank. Now it's filling with sites I've been looking up to try to solve this, but all the previous windows/tab groups are gone.

I do still have the individual history of each site I've been too, so it appears my only option is go through all of that one by one and try to figure out what sites I was trying to keep open.

@josh_bodner I'm noticing in this update pinned tiles in Start are still broken. While the Wide tile is now hidden, the favicon is still stretched to the max size in the tile, where as before it was centered like other Windows apps.

@josh_bodner  The changes to the favorites menu in this release is a big improvement. However, the performance is really bad. It takes nearly 2 seconds for the menu to populate and render after clicking the icon.

@josh_bodner tab groups produce glitchy behavior and get stuck if dragged in the list. 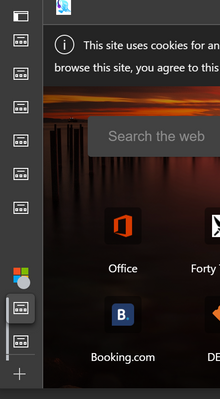 @josh_bodner tab groups produce glitchy behavior and get stuck if dragged in the list.

Yes that's been going on for a while now:

@josh_bodner
I'm not sure if this is a correct place to ask this but how do I sign-in to techcommunity.microsoft.com using my personal Microsoft account instead of my Teams (school/work) account on Edge Dev? Whenever I try to sign-in, Edge does not give me an option to switch accounts. Instead it directly asks for permissions from my Teams account. I am posting this reply from Google Chrome. 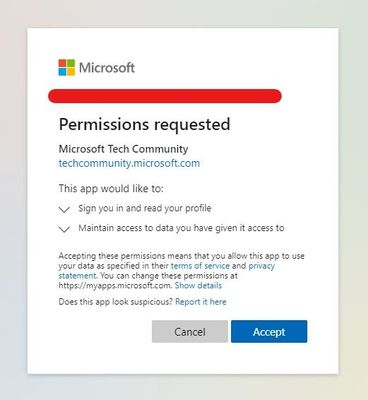 @josh_bodnerAndroid updated just now, still Chromium 77? It's literally from last summer. Any ETA on when we'll get an up-to-date mobile browser and profile support?

@josh_bodnerAndroid updated just now, still Chromium 77? It's literally from last summer. Any ETA on when we'll get an up-to-date mobile browser and profile support?

I need to know this too.

Chromium 77 is very old and each Chromium gets a lot of security and bug fixes/patches, not to mention all those new features that's added in each version. (Chromium 77 - 86)

@josh_bodner New favorites menu takes quite some time to load and I don't like it at all.

or you can create a new profile in Edge browser and (optionally) connect it to your personal Microsoft account. you can do it from here: edge://settings/profiles

if for some reason you aren't able to do that, you can use InPrivate mode.

@josh_bodner Hi Josh, I mean this semi flippantly but also semi seriously - you wrote this "Today, the bug that caused that behavior has been fixed, but the fix causes the exact same behavior. "

Does this mean the bug is fixed or not? To me, reading it says that the bug is not fixed.

Would have been handy to have proof read this, I think. Would it not be clearer to say "We've attempted a fix in this build but we've since found, it doesn't work - we're working on it further"?

@HotCakeX Thanks for the reply. Actually, I already only have my personal account in my Edge profile whereas both my personal and Teams accounts are present in Windows 10. So, I'm not sure why Edge chooses only the Teams account for signing-in to techcommunity.microsoft.com. On the other hand, username is asked when singing-in to other Microsoft websites such as manage account, OneDrive and Outlook.