Hello Insiders!  Today we’re releasing build 86.0.622.3 to the Dev channel.  This is the final build for major version 86, give or take a few small patches, so this is what will be moving to Beta soon.  Since we also released major version 85 to Stable recently, we also updated our security baselines.  You can read more here:  https://techcommunity.microsoft.com/t5/microsoft-security-baselines/security-baseline-for-microsoft-....  We also highlighted some improvements we made in the PDF highlighter tool:  https://techcommunity.microsoft.com/t5/articles/highlighter-tool-for-pdfs-now-with-pen-support/m-p/1....  As for all the changes that are important enough to talk about:

Thanks to everybody who’s been reporting bugs and filing suggestions for what you’d like the browser to look like.  Your feedback has been invaluable!

Any update on when to expect History Sync?
14 Likes
Reply

What about "smart copy" feature? When to expect it will appear in dev/canary builds?

Does this require enabling a flag to show up/work??

Vertical tabs are not that useful to me if the space at the top remains the same. Just pointing out. 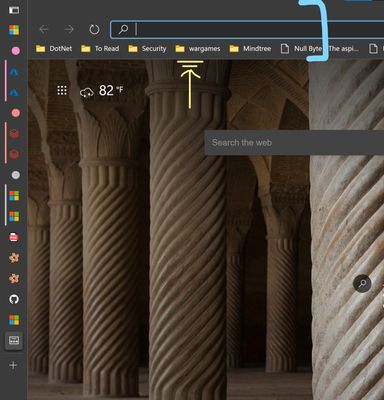 @M_S Agreed. The vertical space needs to shrink. The title bar itself needs to go away to make any difference in vertical height. @josh_bodner any plan for this?
1 Like
Reply

I am having problems with zooming with touchpad . The whole page refreshes (turns white for some time and then everything goes back) after I zoom in or scroll. I had to uninstall Edge Dev and use Edge Beta for now.
0 Likes
Reply

@M_S If the title bar goes away, there will be no place for the minimize, maximize, or close buttons.  I had the same thoughts until I really thought it through.  Where should those buttons go?  I also wish you could resize the vertical tabs.  Just the icon is not enough to know which tab you need if several tabs use the same icon, but the full tab is too much.

@Russ_Turrentine  This would be a perfect use for reveal tabs: both hovering over individual tabs, and a button to reveal all. You know, the feature that's been discussed for close to a year, with absolutely no response from Microsoft and @josh_bodner (sigh).

@ankitbko That unused space is now just a standard window title bar like most other applications have (the ones that don't have a standard title bar still have one, they just put extra stuff in it like Office does, or for that matter like we do when the tabs aren't in vertical mode).  That's actually much harder to get rid of than you'd think, since as somebody else pointed out, the window control buttons have to go somewhere.  And since title bars are very standard UI pieces in any operating system, it would be a lot of custom work to get rid of it.  You also would need some way to drag the window around, and by that point you're adding more buttons and multiple areas of dead space to the address bar area (only a single dead space won't work if that space is the part of the window that's off screen; Edge Legacy suffered from that problem, and we got TONS of feedback about people who couldn't move their window because the draggable space wasn't visible), making it even more cluttered and hard to use.  And an address bar that's too skinny to see the full website is also a security concern, at least compared to its current design.  I'm not saying we'd never do it, but because of all those things working against us, it would be pretty low on our priority list unless we got overwhelming feedback about it.

@simba520 have you filed feedback about it yet?  That'll make sure it gets a bug into our database.

@ZZYSonny That sounds kind of like the page is crashing.  If you reinstall Dev and it happens again, you might want to check edge://crashes to see if any are listed.

@Russ_Turrentine if you haven't yet, make sure you file feedback about being able to resize the vertical tabs, that way we'll be able to count how many people are asking for it!

Looks like Discord is working as well again :)
0 Likes
Reply

There is nothing listed in edge://crashes and it is happening on almost every website. I have used Bing as an example in the attached gif.

@ZZYSonny Oh okay, the flashing is a lot faster than I was thinking.  We've been tracking some other issues recently around webpages flashing in some way, so I'll let the engineers know about this particular cause.

@josh_bodner I ask the Microsoft Edge developers to pay close attention to this issue: "The selection of the context menu items disappears"

This problem is also present in Edge

The problem is that this behavior is not native to the Windows operating system. In addition, it is very annoying if you are left-handed.