Hello Insiders!  Today we’re releasing build 85.0.564.8 to the Dev channel.  This is the final build for major version 85, so expect it to be coming to Beta soon, and also possibly getting a few smaller fixes over the next week.  On the communications front, we’ve got a few things to point out:

On the product side, here’s all that’s worth mentioning in terms of features and fixes this week:

As always, thanks to everybody for your bug reports and suggestions!

There is a problem in the Immersive reader in Microsoft Edge where the upper part of the scrollbar is not seen when the top bar of Immersive Reader is unpinned, more information here. I have sent four feedbacks about this through the in-app feedback tool since February, the last feedback sent in April got a reply in early May that the Microsoft Edge team is working on this issue but it is still not yet resolved after 6 months from reporting it. Can you please give us some insights about what is happening on resolving this issue?

I already submitted feedback on this through the application but I wanted to make sure I reached the developers directly.  First, I'm a big fan of what the Edge team has been able to archive with the Chromium code.  Bravo!  I honestly look forward to every Dev release and it has been thrilling to watch the Edge browser grow, involve and most importantly innovate!

That said, my concern is with the changes to scrolling in the 85.0.564.8 build.  Gone is the precision scrolling I enjoyed with the mouse wheel.  Replaced by a more traditional multi-line scrolling kinetic found in browsers of old.  I hope this is only temporary, but it bothered me enough I sought out this forum hoping to have the problem addressed in a future builds.

@josh_bodner Is it just me or the settings and help & feedback icons got disproportionately huge in the drop down menu?

@josh_bodner @bhargavreddy Same here is this supposed to normal behaviour or is this a UI bug? 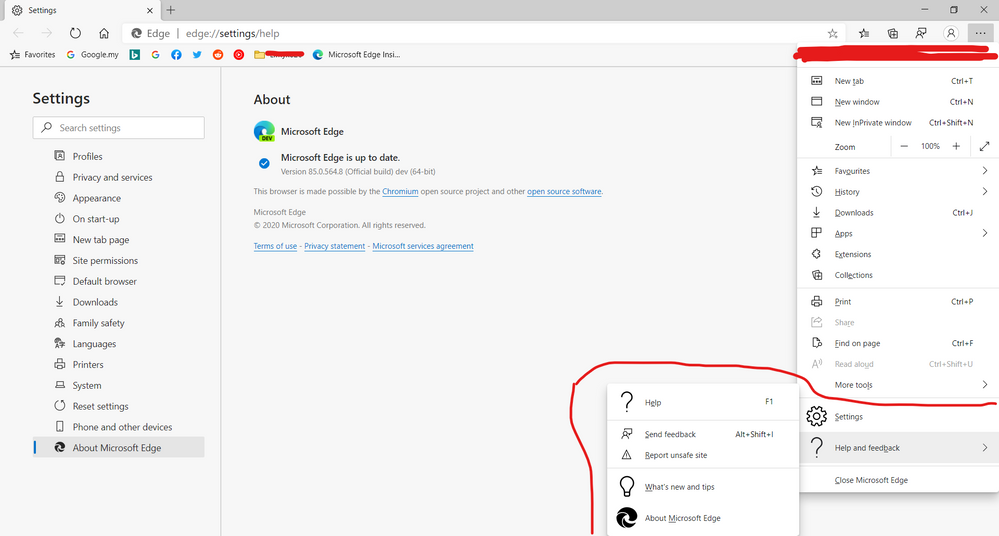 I have it too since upgrading from 85.0.552.1, on all 3 machines running Edge Dev.  I still have occasional sound mute issues, but I think it's less than before.

Highlight feature is weird in Edge. It was awesome in the old edge browser.

This is crazy, right. Even I've got these huge weird icons.
2 Likes
Reply

@wjrandon My scrolling went strange as well.  I have a Logitech mouse with the smooth scroll wheel and it was pixel perfect and controlled but today it just went crazy, becoming overly sensitive and scrolling way too far and fast from the tiniest wheel movements.  In the end turning off #edge-experimental-scrolling has made it usable but no longer quite as smooth as it was.

Yes, same here. Also for me, the scrolling has become too fast with this update.
0 Likes
Reply

@wjrandon Totally agree!  Scrolling is horrible after this update!

@josh_bodner Hmm, the video issue I had before *might* be fixed. A quick test was always to load up a website with a seamlessly resizable video (via drag handle or resize animation). Before this build, that resize action was pretty laggy and in my opinion indicative for all other issues, whereas everything was smooth in Chrome. There was also typically a hitch when scrolling a video offscreen, that's now gone, too. Now things are smooth in this Edge Dev build. So I hope the build stops crashing the GPU driver from now on.

Is on prem cloud-less profile roaming option still a no? This is a blocker for my organization.

There is a problem in the Immersive reader in Microsoft Edge where the upper part of the scrollbar is not seen when the top bar of Immersive Reader is unpinned, more information here.

@TheShaunSaw the bug's still on our backlog, but it's honestly very low priority since it's got a pretty easy workaround to just wait until the bar goes away, so unless a lot more people complain about this, it will probably still be a while until it gets fixed.

my concern is with the changes to scrolling in the 85.0.564.8 build.  Gone is the precision scrolling I enjoyed with the mouse wheel.  Replaced by a more traditional multi-line scrolling kinetic found in browsers of old.

@wjrandon and everybody else seeing issues with scrolling, we've gotten quite a few reports of this recently, so it's definitely something we're trying to figure out.  If anybody wants to try some investigation, there are a few places to start:

We'll be updating Dev over the next week or so with the final Chromium code from major version 85, so when those small updates come in, see if you notice any difference.  If so, the change was likely from Chromium to begin with.

Otherwise, if anybody has Edge Canary installed, it would be good to know if you see it there as well.

@bhargavreddy (and everybody else), the big icons issue was fixed in Canary, but that fix hasn't made it back to Dev yet.  Look for it in the small updates that will come to Dev over the next week or so.

@nivlacckw we've been working on enabling on-prem syncing via Chromium's management policies to enable and set the roaming profile location.  See https://support.google.com/chrome/a/answer/7349337 for details on how to do that.

Thanks. I have been using the same for Chrome for some time.

Will try RoamingProfileSupportEnabled if it is available on Dev channel

@josh_bodner Nope, the video issue came back. Seems after a certain amount of system runtime, Edge starts balking. Any layout changes in the page become super laggy when video is playing, and scrolling a playing video off-screen just made the GPU driver restart again.

Some changes introduced to Edge that aren't in Chrome are causing this. Maybe smooth scrolling? --edit: Nope, disabling it doesn't do anything. Restarting Edge either (which happens with changing flags, anyway).

--edit: The issue persists across reboots now. What the hell? a) There's nothing special to my system, it's an AMD Threadripper (glorified Ryzen) and a Geforce 2070S, and b) it worked fine yesterday when I made the first feedback post, and now it went to crap again!? No driver updates, no OS updates, no nothing.