Hello Insiders, today we’re releasing build 84.0.488.1 to the Dev channel.  This is our first update for major version 84, and we’ve also got a discussion going around what color you expect your InPrivate windows to be:  https://techcommunity.microsoft.com/t5/discussions/inprivate-theming/m-p/1314407.  As for all the most noteworthy changes:

As always, thanks for all your feedback and all the bugs you find!

When custom new picture for NTP is getting out of controlled feature rollout?
1 Like
Reply

You are still saying "you can temporarily turn [the scrolling personality] off by disabling the edge://flags/#edge-experimental-scrolling flag"

I am still saying the day that option disappears I uninstall all versions of Edge and give up on it. I simply will not put up with overscroll 'rubber-banding' and all the rest on my laptop. You should have an overt option in Settings for users to switch between the two scrolling methods and stop saying it's 'temporary'.

You also say "Some users are seeing “wobbling” behavior when scrolling using trackpad gestures or touchscreens, where scrolling in one dimension also causes the page to subtly scroll back and forth in the other.  Note that this only affects certain websites and seems to be worse on certain devices." It happened for me with EVERY page on EVERY website where the page was long enough for vertical scroll.

AND part of the justification is matching behaviour for e.g. touch screen phones. Scrolling on my Android does NOT cause the contents to rubber-band overscroll. There is an overscroll effect indicator overlay over the contents, but the actual contents just stop dead at top or bottom.

"dropdown UI when browsing in fullscreen". Was waiting for this for a long time. Great Job.

@DavidGB For what it's worth, on 2 different computers (one a MS Surface 5 with Intel graphics and the other a Dell Alienware Alpha with nVIDIA graphics) I get neither the wobble nor a bounce from scrolling.  I haven't changed any flags....

And iPhone do bounce at the top and bottom.  Not saying I like it or hate, but it's there.  *shrug*

Big news from this user and perhaps other Star Trek fans. I can now view (with this new Edge release) Star Trek:Picard  w/o having to turn off hardware acceleration in settings, which is the default setting if memory serves. Took me awhile to stumble on this "solution" but it seems OK now.  Stand down yellow alert and thanks!!

No idea if this was "fixed" on the CBS All Access end or not. They are the providers of this program.  All other sites worked OK w/acceleration enabled, but not CBS, till now.

Surface Go with Win10 fully up to date if that matters.

@josh_bodner
"Improved the number of situations where browser sign-in is supported even though the browser is running with admin privileges."

@josh_bodner I'm still seing problems with videos and gifs, they become black sometines, but they are playing, sometimes moving the page up or down, shows the video, or it becomes black only when showing the controls over it, or the mouse is over

@josh_bodner Is there a way to make the Shy UI less aggressive? Whenever I try to click on a UI element near the top of the screen (the Facebook 'f', for example) the tab & address bar drops down and gets in the way. It's very, very annoying!! A longer timeout before dropping down the bar, or even a smaller trigger area (closer to the top edge of the screen) would go a long way here. Thanks!!
7 Likes
Reply

After updating to this build I can no longer paste items in Microsoft Community Editor. Have to switch over to Edge stable in the meantime. Feedback already filed.

Shy UI works fine on keyboard systems, just use Control-L to bring up the address bar in fullscreen mode.

How about for touchscreen tablets like Surface Pros? On those devices, I have to exit fullscreen mode to access the address bar.
4 Likes
Reply

@josh_bodner So I seem to have a hit weird bug after updating to the latest build.

I'm glad to see the Dropdown UI is now activated by design and has become an official feature of edge. I experimented with it since it became available months ago by enabling edge://flags/#edge-enable-shy-ui

But unfortunately the issues of the previous versions are still unsolved: 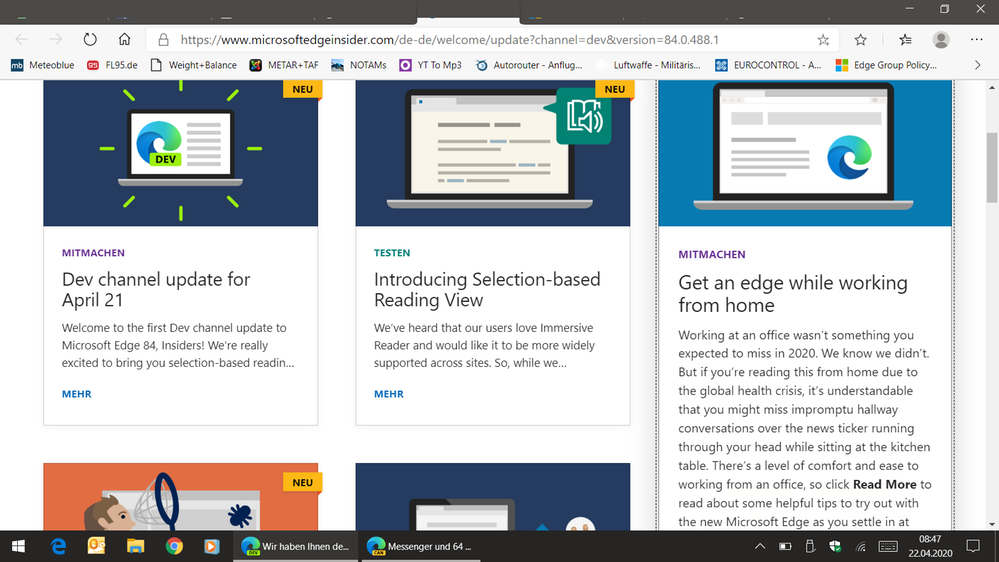 Thanks for the good work, at least we have a urgently needed feature that was always missed in Chrome, but please keep an eye on fixing the above.

I noticed the same issue with touch, didn't think of the pen input workaround, thanks though!
I filed feedback :)
1 Like
Reply

@josh_bodner  Paste/CTRL V not working in gmail.  Fine in chrome and FF.

So the problem is not confined to a single site I mentioned above. Thanks Steve for the confirmation.
1 Like
Reply

Jeez, you harp on this every time.
1 Like
Reply