Hello Insiders, today we’re releasing build 81.0.410.1 to the Dev Channel.  We’ve also got our quarterly survey available to take here:  https://techcommunity.microsoft.com/t5/surveys/quarterly-survey-january-2020/m-p/1138394.  Please let us know how we could better interact with you on the Tech Community forums!

Next, we’ve got a new how-to over on the Enterprise section:  how to disable the First Run Experience:  https://techcommunity.microsoft.com/t5/enterprise/how-to-hide-the-first-run-experience-in-the-new-mi....  There’s also a new blog post explaining our work to localize the F12 Dev Tools:  https://blogs.windows.com/msedgedev/2020/02/04/localizing-edge-devtools/.  Finally, all of the most noteworthy features and fixes for this week:

We expect next week to be the final Dev release for version 81.  In the meantime though, thanks for all your suggestions and all the bugs you’ve found!

@sialivi Same problem for me

@josh_bodner Updating to this build I noticed that the right click menu on my tabs now has a really long string. Disabling extensions, in case those were causing a conflict, does not change it. 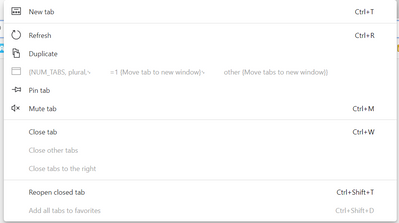 It had been on Canary too for a short period but it's Fixed now in Canary channel.

Dev must wait another week to receive the fixes 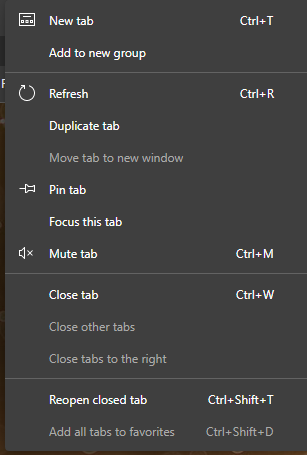 What is the shortcut for Reader mode?
0 Likes
Reply

@josh_bodner Is there a timeline for when the download behavior that has been discussed extensively will be implemented?  I am waiting for this to be addressed before deploying it to my firm.

I have the same issue and it only appears when there is one window of Edge. As soon as I have more than one window it has the proper drop down menu option "Move tab to another window"
0 Likes
Reply

Hi Josh,
Upon reading the list about this release, it's showing the user's of the browser that the developer's are really taking making the browser better and better.
David
0 Likes
Reply

Josh,
Your statement, " I'm a user of my own product, and there are still features that I'm waiting for that make it very difficult to use in the meantime " really made my day better ! All I can say is that the developer's of chrome had better watch out ! :)
0 Likes
Reply

@nistre14193 wrote:
What is the shortcut for Reader mode?

I get this without using read aloud, seem to only happen when i first visit a site and only if i've not clicked a link, which makes it very hard to submit a bug report for.

At what point will it become a priority to fix/implement ALL the syncing options?

seeing instances of text on web pages glitching out until I refresh the page.

either the text is gone or it turns into an indecipherable mess of gibberish.

have been for two builds now.

are we ever going to have the ability to show icon only for folders on the fav bar???

@Dennis5mile I feel like this would be really confusing without also adding the ability to customize folders since websites at least have their favicons that make them all differ, or if you only have a single folder.  I'm curious how many other people would find this useful now though!

As earlier requested I've sent a PM to @Allen to change my username. May you be so kind to look into it?

@Sansaido unfortunately I don't have any visibility into that process since it's being done via PM.

I noticed that the right click menu on my tabs now has a really long string.

@lindhartsen as @HotCakeX has noticed, the fix for this made it into yesterday's Canary, so it should also make it into next week's Dev.

@Dennis5mile I know.  Not the first time is it!  I am wondering if it has something to do with Old Edge and Edge on Android etc.  Seems that it is trying to sync but somehow ends up duplicating.

Well, in old Edge, all you had to do was hover your mouse over the folder and the name of it would show. Right now I have 17 folders on my Fav Bar and because I can not hide the name, it makes for a very, very long bar..... lol

Yes, exactly what I think is going on, but only happens when installing the newest version of the browser....

this is what I'm seeing with text on quite a few pages. out of nowhere it'll glitch up.

When can we see icon-only status of favorites synced between devices?
0 Likes
Reply