Hello insiders, today we’re releasing build 79.0.308.1 to the Dev Channel!  The biggest news today comes from our sync team:  syncing of open tabs between devices is now available.  To see the tabs from your other devices, go to the History section of the … menu.  Additionally, users with work or school accounts can now sync their data to Mac devices.  Some of the other noteworthy changes for this week include:

As always, we appreciate all the feedback and suggestions you send us.  Thanks for using Edge!

>Fixed an issue where the first run experience greets users as “Profile 1” instead of their name.

Welp, all I get now instead of default Profile 1 is a metric ton of 0000000000 instead.
First noticed it on some Canary version (happened some version after new profile icons were already added). It also messed up Privacy and Security settings page by adding this message on top so now I have huge scrollbar on the bottom to scroll through all those zeroes:

Anyone else affected by this issue? Didn't see anyone mention it in the Canary discussions. This is still an issue on the current Canary build 79.0.309.0.

Hi. i fixed this bug with remove my profile and add new profile.
0 Likes
Reply
Highlighted

@lunarsound I'll make sure the team knows about it if they don't already!

This change has brought back the rounded indicator.

Yeah, creating a new profile fixes the zeroes issue in the Privacy and Security settings menu. But it seems impossible to remove my original profile and use the new one instead.

@josh_bodner
Thanks. Also, I didn't notice it at first since I don't use online account/Sync but it appears that Sync is completely broken on my profile and on fresh installation as well.

By default after fresh install my profile is named "Work" for some reason, also has PC name and Windows username below it but no Sign-in button and Sync itself is greyed out and says "Sync isn’t available for this account". Creating new profile enables Sync for that profile, and it also doesn't have PCname/username below the profile name if that's relevant. I attached screenshot examples from the 79.0.309.0 Canary running on Windows Sandbox (hence weird PC/username) but everything is identical on the current Dev build.

@josh_bodner I am really excited by all the developments coming to fruition with this new (Dev) build and those that are planned.  It is so good that so many of the superb features from Classic Edge that are perhaps unknown or simply missed by casual users (many of whom believe they 'need' Chrome because they mistakenly think that it is a search engine and immediately install it without trying Edge,) are coming to Chromium Edge.

(I specialise in working with older people and assisting them to get the most out of their technology.  I mourn the pure simplicity for the end user of 'the appearance' of having one OS that did everything - with Windows 10 running on PC and Tablet, and Windows 10 Mobile on phone, with Cortana in a pocket or in the car as a Satellite Navigation device - that mix made life so easy for people who really do not understand technology, but I understand its limitations and believe that Windows 10 and Windows 10 Mobile could never really be popular.)

I have been using Edge as my default browser with Microsoft Launcher on Android phones for several years, and I often set up the same system on my clients devices. It is really exciting to see how Android and now Chromium Edge are bringing the best features Microsoft can offer in synchronising data, fluent design, and ease of use to the masses, whether on Desktop, 2:1/Tablet or Mobile via Windows 10 or Android, or even Mac/iOS.  I came late to this forum but it is so good to be able to share experiences and notify issues as the project continues before launch, and hopefully grows afterwards.

I have used Chrome, Firefox, Opera and other Chrome variants but I always disliked them. I liked the flexibility that Firefox gave the user, but often add-ons and features would crash.  Opera had a slightly different feel, but to me Chromium Edge is going to provide a very different user experience that I hope will finally provide a viable alternative to Google's Chrome - without the need to be quite so heavily tied to Google - if the user so decides.

I think you summed it up pretty well. I just did extensive updating and configuration of Windows 10 for a "not tech savvy" relative.  She is precisely one of the "... many of whom believe they 'need' Chrome because they mistakenly think that it is a search engine and immediately install it without trying Edge." I  installed, configured and hardened the newly released Edge Stable for her laptop today and I'm quite certain she won't miss either Google or Chrome.

@josh_bodner "Fixed an issue where some buttons appeared circular when they’re hovered over instead of square/rectangular." Oh, thank goodness. I was afraid this was a deliberate design change.

Thanks for the fixes to the "crashing" issues. The last version was my first experience in this channel with serious bugs. Also, I've noticed that edge://flags have changed over time, which had me thinking about native containers for Edge Old vs. Chromium. I inquired but never received a reply from staff asking whether Edge Chromium will be containerized like Old version, e.g. strong container for PDFs, for which there was a flag in earlier Chromium versions. Are you able to shed any light on this and how/if its process(es) compare to Edge Old.

BTW: Installed Edge Stable for a relative who has become an Edge convert.

I'd love to use Chromium Edge as my main browser but until these issues are fixed I will likely keep using Classic Edge as long as possible because the high level of polish makes my Windows laptop feel like a premium experience, regardless if other browsers are getting faster and gaining other improvements. 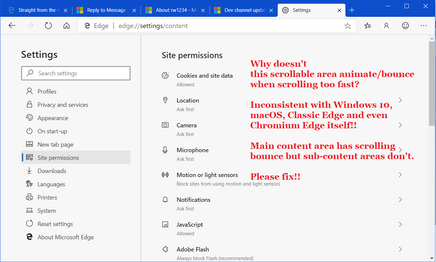 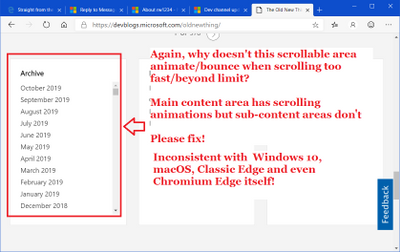 @josh_bodner this is still happening. 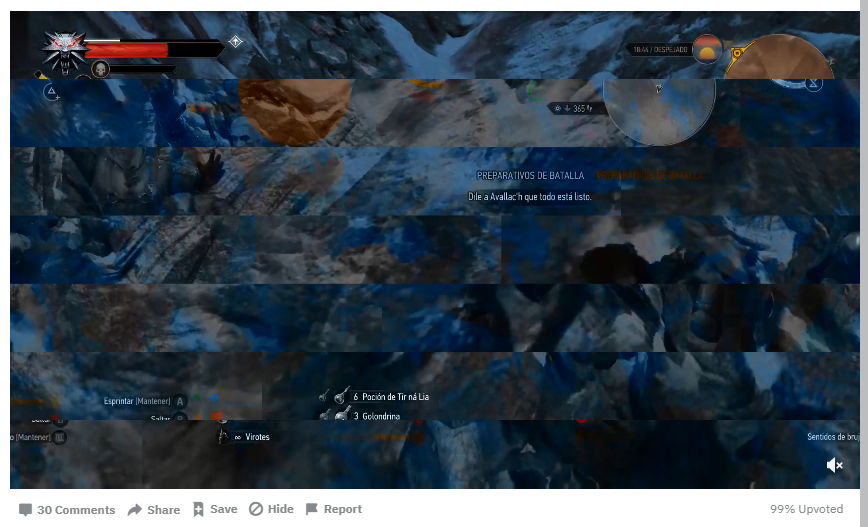 @josh_bodner Some extensions still not working, for me mainly reddit hover text and some imagus links.  These extensions work fine in the Beta version but not in Dev??  Hasn't crashed yet :)

@josh_bodner
I'm finding Bigfoot before I get tab sync aren't I?

This is now the second Dev release proudly proclaiming this feature but it never shows up 🤷‍:male_sign:

>> Tab sync sounds cool, if it works... reading other notes (here) hints at a Controlled Feature Roll-out.  I'll try it shortly... just finishing up installing a new Windows Insider Build; will try between it, a vm & the host.  Seems like I have it between Channels on the same device.  I'll amend this once my IB is live; at 90%, now.

>> I can't speak for many extensions since, I don't have/use many, but, the Scroll to Top button Mode selector is, still, broken.

>> Well, I did recently mention Add notes was coming... seems this meager attempt in PDFs is the beginning of that (wink)... although, needs to be in the browser for web pages not, just PDFs. "Stayed tuned, don't touch that dial, there's more to come after we pause for these announcements..."

) People will be smiling about Reading List. Albeit, a rather convoluted way to reach it after it's in Edge C.

>> Seriously, there is some very cool stuff in this Build.  Stuff that, really, does prove 2 things, IMO. 1 is that things are coming.  Wee pieces at a time, maybe, sometimes, but stuff we know, love & want (from Edge) is coming. 2 is that is seems quite clear that the Team is aware of what's wanted and are listening to demands & feedback.  And this Build is showing some solid strides in good directions, IMO.

>> Personally, I sure do prefer the Controls and decisions made for which design(s) to use and the rest of the work in this area is spot-on, too.  You can "Read all about it" HERE.