Now that this "feature" has been introduced, how does one pin a website to the desktop? Being able to create a shortcut on the desktop was far more useful than being able to pin to the taskbar because the shortcut could be moved to different locations.

Why was the ability to pin a website to the desktop removed? Who asked for it to be removed?

When portuguese brazilian will be available on the ms edge insider?

And pin to Start Menu for us Tablet Mode users is gone as well. @PiecesOf8

@josh_bodnerI noticed in PWA websites, the Web Push Notification server is still from google, what about the plan to switch push notification to microsoft server. Because in CHINA, the google is banned, and the Push Notification is breakdown.

Be aware that this dev build totally breaks screen reader support across the board in the browser chrome. Only web site content is fine. As soon as you try to go to the address bar, NVDA, JAWS, and probably Narrator, too, will totally get stuck. This is a problem in the dev, Canary, as well as Chrome Canary channels and has been there for way over a week without a fix, but with a bug report in the Chromium issue tracker. So if you're blind and have to use a screen reader, either hold off on updating to this build, or use a different browser until a fix is available.
0 Likes
Reply

Okay so this issue hasn't been fixed yet! Just wanted to let you guys know.

I'm using google as my default search engine and searching for anything in the title bar doesn't show results from google.

Now that this "feature" has been introduced, how does one pin a website to the desktop?

But it crash very often.

Almost every few minutes I get: 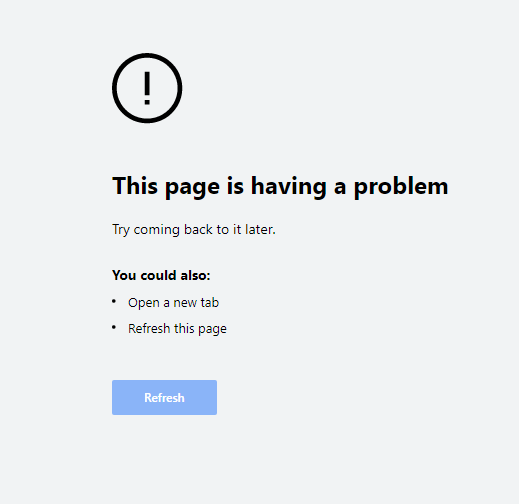 Agreed. There are two issues here for me:

1. I don't want to clutter my taskbar with pinned sites, but I do want to pin sites to Start or Desktop where I can arrange and group them as I like.

2. When a site is pinned to the taskbar, the site still opens up as a tab in whatever edge window is currently open, and not in its own window associated with the pinned taskbar button! For me, the entire point of pinning a site to start/taskbar is that I can treat it as an independent app, separate from the other browser tabs I may have open. Chrome implements this via its 'Open as window' open when creating a shortcut, and it is literally the only reason I keep Chrome installed - to be able to treat web-apps as desktop apps, and not tabs that get lost amongst all the other stuff I'm browsing.

@dhirensham You can use the feature "Install this Site as an app" in the Apps menu. That will give you a Desktop icon and it opens as a single "program" in the taskbar.

Pin to taskbar is not new to this Build.  Has always existed in Edge & before.  It was missing from Edge C and was put in before this Build.  Pin to desktop never did exist, doesn't exist in Edge & was removed from Edge C.  Wasn't a reason or logical rational for it which, is why it never existed in the 1st place.

@AndrewGolubev
Not I, Andrew.  So far it is perfectly fine & stable.  Maybe, someone else...

I know, that's no help... well, then again, you can know it's not universal.  I would suggest you uninstall Edge C, grab it anew HERE , reload & see what behavior you have.

One does not want a cluttered desktop, either.  Nor is there any time enough sites would be pinned to the taskbar to clutter it. Pinning is not something that begets clutter; if so, it's being misused.  (And, bonus) One can, actually, see a taskbar whilst working & windows open.

You're #2:  This is normal, proper behavior. IF the browser window is, already, open a pinned site will add into it.  IF the browser is not, already, open, then the pinned site will (newly) open the browser.  There is nothing wrong or amiss here, the behavior IS correct.  Certainly, it is identical to Edge.  This is the same behavior that, already, exists.  It is not peculiar to Edge C.  It, actually, should be acutely familiar.  Oh, btw, right now, they DO have it going to both places simultaneously, Taskbar & Start, just like you want.  It's not the way Edge works, now, but, it does suit you ;).  Sites do not normally pin themselves to Start.  That should NOT be familiar.  Pinning sites 'permanently' isn't, really, by design... mixing apples & oranges... falls in the Favorites category, treated in that light.  Sites are saved as Favs.  There is a (big) difference betwixt saving & pinning.  Or one pins super-favorites which, should be few.  There is no reason a Win 10 taskbar should become cluttered.  And desktops aren't a storage place.

As an aside, a nice practice is not to have desktop icons showing; there is no need.  What few there are can be accessed via the Desktop toolbar. Can't justify covering a nice desktop. Also, there folks like myself using an Applications window, an example ⬇, @ the taskbar & not using Start, at all. Also, is a snip of Start; might notice the absence of something.  The Dev Update should not be there.  It's from testing Pin to taskbar to see if they had fixed this, yet.  Was doing it before this Build, as well. 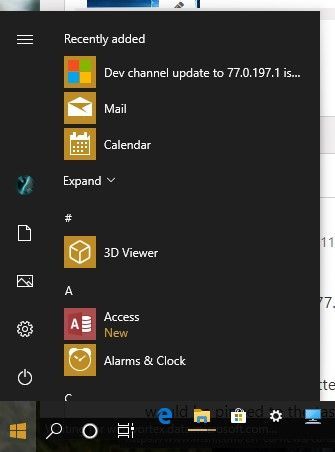 Certainly for me personally, the main reason for pinning sites anywhere is to be able to reach them quickly. From the release notes, it appears that one can no longer pin sites to the desktop, but only to the taskbar. Meaning if you have a lot of sites you wish to reach quickly, then you would end up with a cluttered taskbar. Meanwhile, if the sites were pinned to the desktop, they could be rearranged into folders or moved to the start menu to reduce clutter on the desktop if required.

Regarding #2, I am aware that this is how the original Edge worked as well, and it's also something I've submitted feedback around in the past already. That doesn't mean that the functionality is ideal. More and more services are becoming available purely via the web, rather than as desktop applications. I understand the reason for this trend. But there is still a use case for a website, which one would ideally like to treat as a desktop app, to behave like a desktop app, in that it is distinct from the other browser tabs you may have open. For example, MS Planner has an iPhone and Android app, but no UWP app (a tragedy in itself since MS owns Xamarin). This means from my desktop, I must access it via the browser. It's something that I typically keep open all day, so I don't want it lost between tabs of blogs, stackoverflow, etc. Especially when one frequently cross-references stuff from various browser tabs when working with the web app that you want to isolate. It's a lot easier to alt-tab to a distinct app, compared to hunting for it amidst a bunch of tabs.

Thankfully the functionality that I want is already available in Edge C as per @Urs Wedershoven 's comment (Install this site as an app), so I am happy now.

and drag the icon to the desktop.

I don't understand why I am being told this. I just tried to point out to someone else where it was :grinning_face_with_sweat:
0 Likes
Reply

@PiecesOf8 You can still drag the address from the address bar to the desktop if you only need a shortcut.