Since updating to Edge v81.0.403.1 (as well as KB4528760 and KB4532938 at the same time in my case), I (and several others) are often encountering a major text rendering issue where nearly whole lines of text end up completely scrambled with seemingly random symbols appearing in place of letters, with different random symbols occurring ever time re-rendering of the text is triggered.

You can see the issue in the screenshot below of this page on Microsoft.com (for example, out of the dozens of sites it's occurred on).

This issue occurs frequently (up to dozens of times per day), always after selecting text, but not ever time text is selected. This issue has occurred with dozens of different websites, and regardless of whether browsing in InPrivate mode with all extensions disabled.

Any action which causes the text to be rendered again – such as Alt-Tab (to a window on top of the browser) and back again, or selecting the affected text (to highlight it), or Win+Shift+S (causing screen to be tinted gray for screenshot selection), etc. – causes different random symbols to appear for the exact same portion of text that was affected.

In some cases, deselecting all text will cause the rendering issues to temporarily cease, and in other cases, it just causes the random symbols to change to different random symbols instead.

This is an intermittent issue. At times I can reproduce it dozens of times in a row, and other times I can go 20 minutes without being able to reproduce it even when trying intentionally to do so. Refreshing a page can cause this issue to go away temporarily. However, once it starts occurring it seems to occur more often for various pages or every time text is selected on a page.

I also reported this issue with steps to reproduce via Send Feedback in Edge Dev, along with my email address. However, as I, unfortunately, have no way to reference that report here or reply to it or know it will be noticed (as can't flag as a bug or critical issue), I'm reporting it here as well. I'd appreciate it if this bug report could be passed along to the development team, especially as others have confirmed this issue here in this forums.

I'm reporting the issue here with further details in case it may prove helpful, and also so that it may be easier for others encountering the same issue to find here so don't have to take the time to write up their own details reports regarding it. After, my initial report, I also found others, such as @josh_bodner, @jbart007 and @Heath Bates, in this reply to the Edge v81.0.403.1 release announcement thread.

Additional Screenshots of the Issue

As seen in these screenshots, this issue results in different random symbols showing each time re-rendering is triggered for text which occurs in close proximity to where different text had been selected. Sometimes different lines end up affected, sometimes the issue temporarily disappears after deselecting text, and sometimes different symbols appear for the exact same portion of text when triggering re-rendering or when changing what, if any, other text is selected. 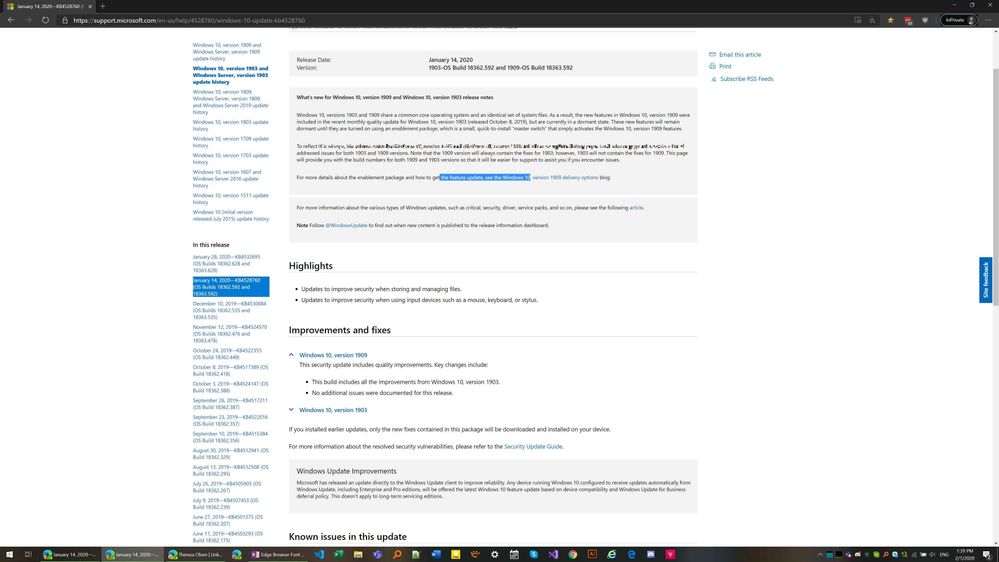 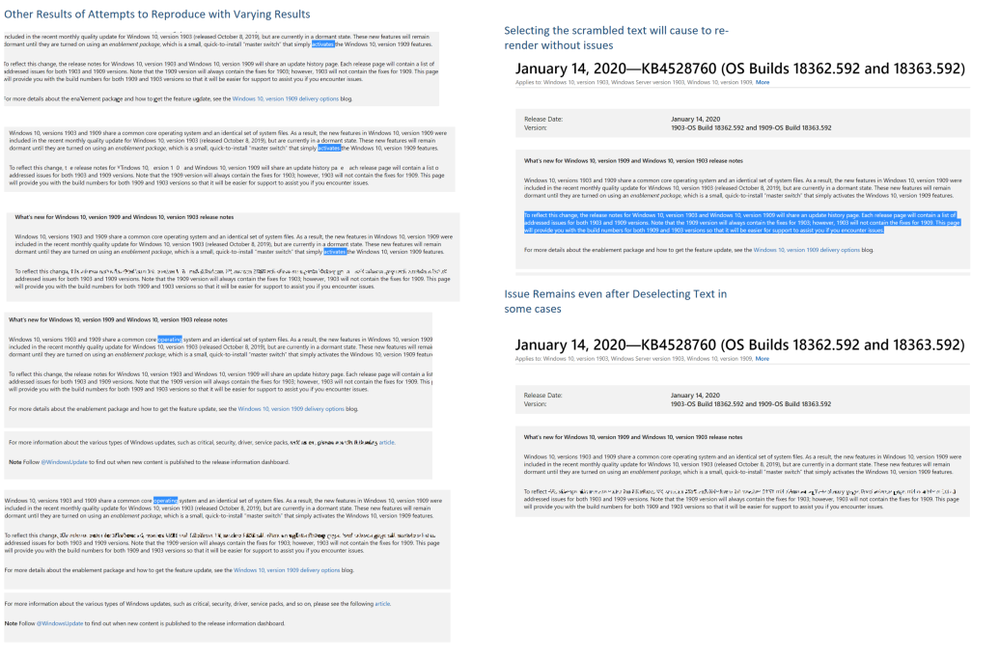 1. the problem is only happening in Edge Dev channel, other channels like stable or Canary don't have that problem.
2. Windows 10 updates don't have effects on it, very unlikely, because I'm on insider fast ring, didn't install those updates that belong to stable Windows 10, yet I could easily reproduce that bug on Edge Dev.
3. best thing is to wait it out, the fix is already included in Canary, so on the next major update, Dev will also receive the bug fixes.
1 Like
Reply

@HotCakeX thanks for the update. I'm glad to hear a fix is in the pipeline for release to Edge Dev channel.

You can see the issue remains in the below screenshot (eg. occurring at https://azure.microsoft.com/en-us/pricing/details/virtual-machines/linux/ ) with random characters under "Pay as you go" above the selected text, which appears as different random symbols every time re-rendering occurs (eg. Alt-Tab and back):

Also, the issue remains even after deselecting text, as shown in the below screenshot, even after Alt-Tab or otherwise causing it be re-rendered again:

"the visual glitch is completely random and not caused by any user actions, although highlighting the text should fix it (at least until it happens again). It's caused by an upstream Chromium bug, and we received the fix for it from them earlier this week, so it should make it into the next Dev release."