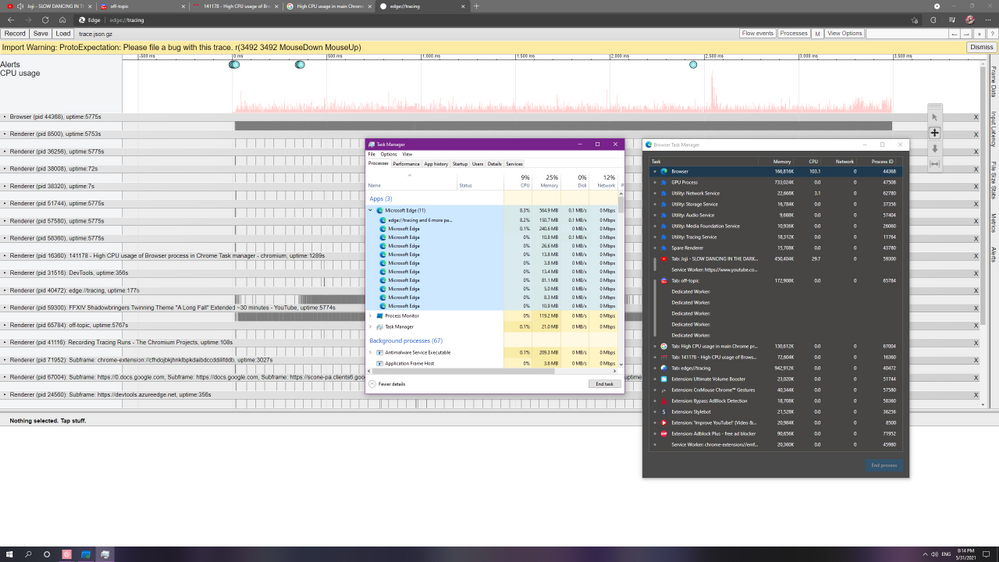 What is the expected behavior?

The CPU usage should remain low while being idle, and discarding tabs should give back resources to the system.

Steps to reproduce the problem:

Did this work before?

No, since I was already having the same bug in version 90.

What is the system specification?

Steps I have taken in an attempt to solve the issue:

1. Disabling extensions and testing each of them.

(Note that the above steps does not solve the problem since I have run into it again. Because of that, it leads me to believe that it is an existing bug within Edge. The only workaround now is to restart the application, but then the same issue comes up eventually after an indefinite amount of time.)

I have spent many hours doing my own investigation to pinpoint the issue, but I have not been able to come up with a conclusion. To help others investigate the problem, I have attached a trace file here. More information can be provided if it helps the process. I really hope someone who is knowledegable, can take a look and see what is causing the issue. Thanks for reading.

I also want to give a quick example in case someone comments that the level of CPU usage is normal here. Under normal working condition, playing a 1080p/1440p/2160p YouTube video in the background and browsing a couple of websites yield about 1-3% CPU usage on average. I have benchmarked the performance against Google Chrome under the same conditions (extensions, settings, etc), and it appears to be consistent. However, the bug is only exhibited in Edge.
0 Likes
Reply

I decided to give it another try by doing a stack trace since I have just run into the same issue again, and the results confirmed that it is indeed a bug.

You can see that "RelaunchChromeBrowserWithNewCommandLineIfNeeded + 0x1ee5c8" is called repeatedly by "msedge.dll", which leads to high CPU usage. 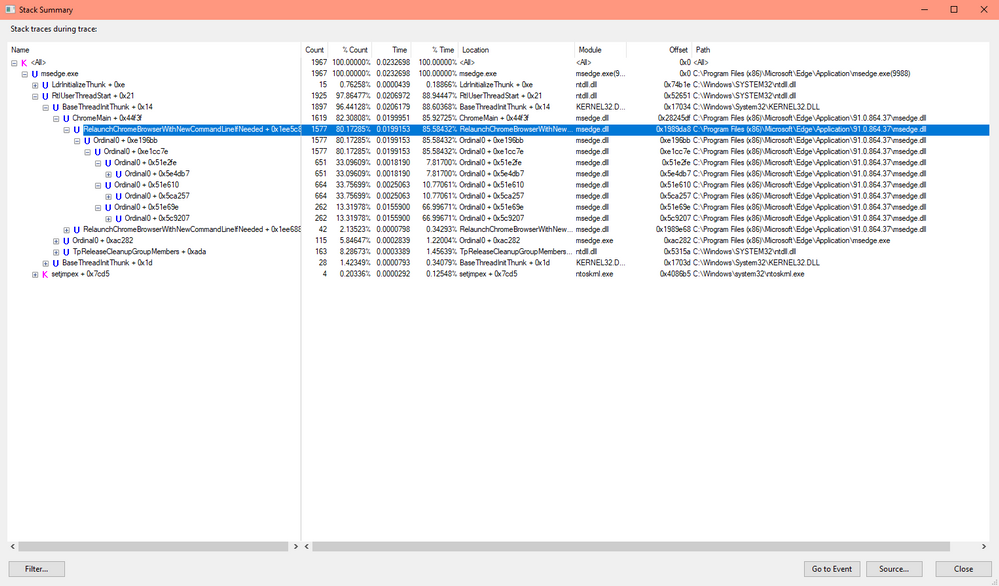 I really hope this gets addressed as I am using Chrome for now. Also my system is a Lenovo X1 Extreme with 32GB of RAM and i7 8850H (6 core).
0 Likes
Reply

In addition to high "System" CPU usage, when I close Edge and run CCleaner, it always asks to force close Edge as it seems to be still running in the background.  When it forces Edge to close, the high System CPU will stop after a few minutes.