First published on MSDN on Oct 19, 2016
Describe the log backup process on a ROSR


This is the second post in a planned series of articles relating to SQL Server transaction log backups of databases using a read-only secondary replica (ROSR).  Since the introduction of ROSRs in SQL Server 2012, administrators have been able to perform full database (copy only) backups as well as transaction log backups on any of the secondary replicas within the same Availability Group.  This allows the administrator to reduce or eliminate resource contention between production activity and backups. This article describes the steps and communications between the primary and secondary that take place when the secondary performs a backup.

What is the process for taking a backup on an ROSR?


The following is a high-level description showing the sequence of events that must take place on both the secondary and the primary to complete a successful backup. The valid types of backups that can be taken on an ROSR are: FULL and LOG. For FULL backups, the following are supported when using the COPY_ONLY option: DATABASE, FILE, or FILEGROUP. Differential backups are not supported against secondary replicas. 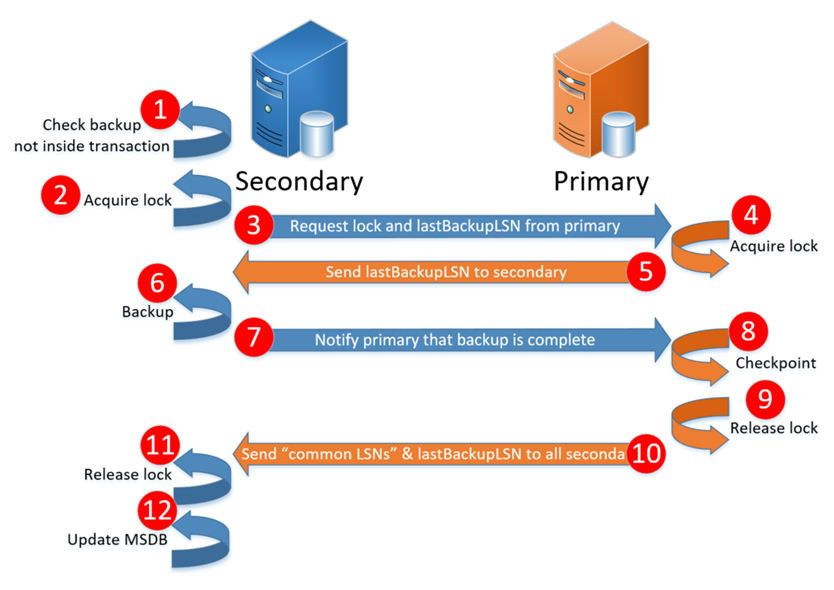 The next screen shot shows an Excel spreadsheet of the Xevents from both servers listed in order and labelled with the same step numbers as above so you can see in one comprehensive view the sequence of events. 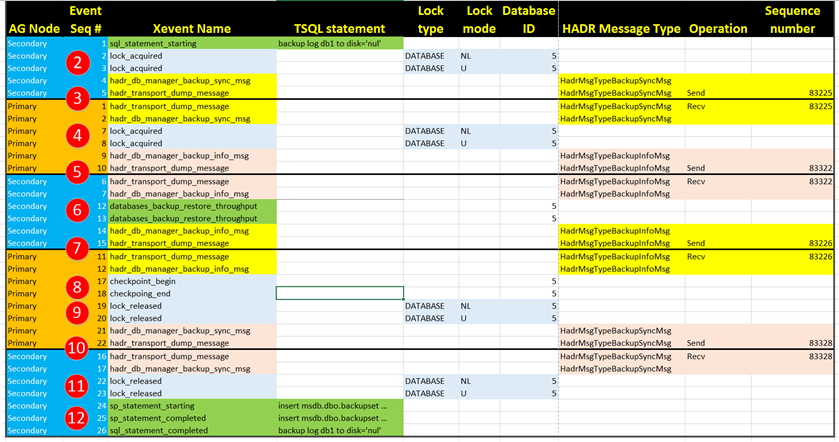 What do the XEvents look like for tracking this process?


The next screen shot is from the Extended Events viewer in SSMS for the Secondary. It shows most of the XEvents captured during the conversation. Some were omitted because they are not covered in this article.

And here we have a screen shot of the Xevents from the Primary's perspective. (Again a few have been filtered out for clarity of this article.)

Here let's focus on a subset of the Xevents that show the request from the secondary to the primary that essentially says – "I want to do a backup. Tell me if it's okay and where to start."

Okay, I see the backup LSN go back and forth, how can I relate that to my backups and the LSNs I see in MSDB tables? They don't look the same.

This is where part 1 of this blog series comes in handy. If we take the various components of the HEX based LSN and convert them to decimal, we'll see they are the same. For example:

Concatenating these together we get one version of the decimal format:

Sometimes you will also see the decimal LSN in the following format – still with colon separators:


This article has attempted to demonstrate the steps and communications that take place between the secondary and primary replicas when performing a log backup from the secondary replica.