20170919 – Thanks to my colleague' suggestion, the post and the attached script were changed to remove IIS components which are not necessary to the Web Console installation. Thanks Tyson.

Maybe this has been already blogged, but in the attempt to make IT guys' life easier I want to share a small Power Shell script which I Used to install the necessary Web Console prerequisites for System Center Operations Manager 2016 on Windows Server 2016 .

Instead of going back and forth with the System Center Operations Manager prerequisite checker and install the required components one by one, you can use the script in attach which is also screenshotted below:

You can simply launch it from an elevated Windows Power Shell prompt.

The script will ask for an optional parameter, the Source, that will allow the user to specify the path to feature files if the files are not available in the local feature store of the target computer.

This parameter can be left blank or null, hence should you not need to enter any source path, just hit Enter and the script will move forward.

If you want to test it before running in Prod, you can add the -Whatif switch at the end of the Add-WindowsFeature command line and you will get something similar to the screenshot below wit some nice info at the end: 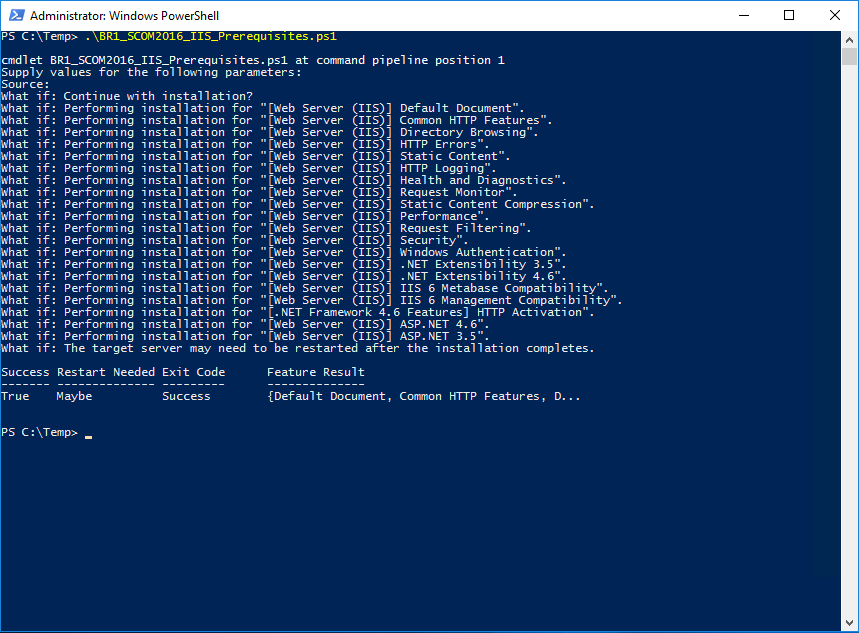 The script will automatically restart the server ONLY if needed (thanks to the restart switch).