Hello everyone, my name is Daniel Metzger and I am a Senior Premier Field Engineer for Secure Infrastructure based in Switzerland. In this post, I am going to show you how to use a minimal set of Group Policy objects to isolate domain admins and domain controllers and other Tier 0 assets. If you are not familiar with Microsoft's administrative tiering model, a great starting point would be this article and this one.

The approach outlined in this article has the following goals:

Implementing complete administrative tiering would require additional steps like creating a new structure of Organizational Units (OUs) in Active Directory to securely host Tier 0 assets, apply restricted delegations and security baselines from the Microsoft Security Compliance Toolkit (SCT). This is not covered by this article. The target audience are organizations which have not yet restrictions for the movement of domain admins in their environment.

We need at least two GPOs which both are linked to the domain node:

The resulting GPO "T0 Initial Isolation (Computer)" looks like this: 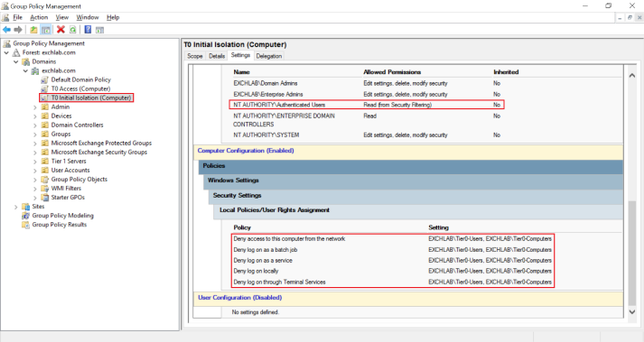 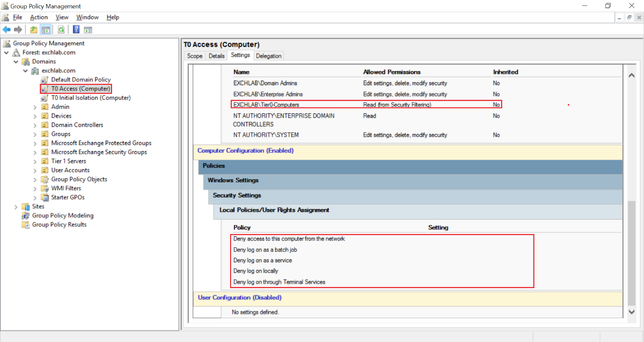 So far we did not add any members to the "Tier0-Users" and "Tier0-Computers" security groups. Even linking both GPOs to the domain node has no impact yet.

NOTE: The link order of the two GPOs is extremely important, so you want to test this in a non-production environment first. If the link order is wrong, we block domain admins from logging on to any Windows system in the domain including domain controllers. Although this would protect domain admin credentials as much as possible, it is obviously not a great idea.

This shows the correct link order:

The result is that all members of "Tier0-Users" and "Tier0-Computers" are allowed to log on to Tier 0 systems only. This prevents domain admins which are added to the "Tier0-Users" security group from logging on to servers and workstations outside of Tier 0.

At this point, we still have a few more items to complete to make this work.

NOTE: Never add the built-in RID500 Administrator account to "Tier0-Users" as this is our break-glass account for any situation nobody else is able to log on to the domain and for disaster recovery.

Since domain admins as members of the "Tier0-Users" security group are going to be able to access Tier 0 systems only, they cannot log on to some workstation in the domain to connect to a domain controller. This is what we want primarily, of course – to get domain admins off Internet connected, unsecure workstations. But they still need to be able to log on to domain controllers every now and then.

This is where dedicated administrative workstations come into play. At first these workstations do not have to be fully fledged Privileged Access Workstations (PAWs). Laptops running the latest version of Windows 10 with Credential Guard, Device Guard, Local Administrator Password Solution (LAPS) and the hardening Security Compliance Toolkit (SCT) baselines applied plus blocked Internet access would be a very good start. These administrative workstations would be added to the "Tier0-Computers" security group also and act as endpoints to directly connect to domain controllers either running the needed Remote Server Administration Tools (RSAT) or employing SSL-secured Remote Desktop (RDPS) sessions.

So far, we have discussed domain admins and domain controllers only. But there are other systems to be considered:

We could add CAs to the "Tier0-Computers" security group to avoid he problem. But maybe you do not trust your PKI because its administrators have been exposed to lower privileged systems in the past or / and is not built according to best practices. You decide to leave them for the moment while planning for a migration soon, the new issuing CAs being "Tier0-Computers" from the very first moment of their existence.

For this use case I will introduce a solution based on a third, temporary GPO a little bit later in this article.

We need to disable the Print Spooler service on all domain controllers which is another recommendation when conducting Active Directory security assessments with customers. Additionally we must set the policy setting "Allow Pruning of Published Printers policy" to Disabled. This step requires processual changes as domain controllers will not prune orphaned printer queues in Active Directory anymore. This task needs to go back to where it belongs to, and that is the folks operating print servers.

I see organizations either investing in dedicated Tier 0 services or replacing them with built-in Windows tools. They use Windows Server Backup (wbadmin.exe) instead of third-party backup solutions (which would be our recommendation for Active Directory disaster recovery, anyway). Microsoft Deployment Toolkit (MDT) and WSUS replace SCCM since task sequences for Tier 0 systems are not that complicated as we have here a very restricted set of services provided. With Windows Server 2016, I see organizations shifting to Windows Defender for Tier 0 hosts instead of using antivirus and anti-malware solutions from third parties. These changes further reduce the footprint of Tier 0 as much as possible.

If organizations want to just isolate domain controllers initially, they can introduce an additional security group and another domain level GPO to grant domain controllers network access to a small number of other servers, like certification authorities or WSUS hosts. This would be a short-term temporary situation to gain some time to properly build those services in Tier 0 dedicated to Tier 0 systems. 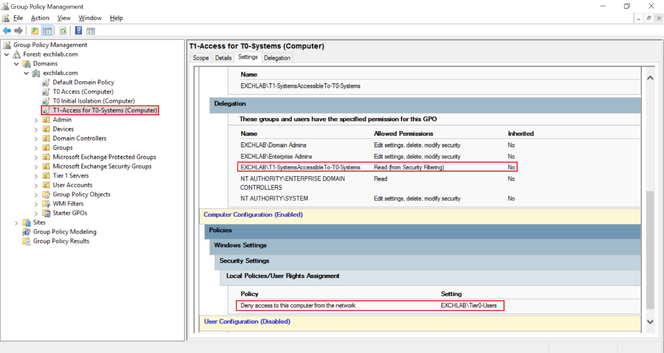 The link order would require this GPO setting to be applied to target systems after the "T0 initial Isolation (Computer)" GPO to work as expected:

The resulting settings for members of the "T1-SystemsAccessibleTo-T0-System" security group is:

This allows domain controllers to access those hosts over the network (network type 3) while credentials of domain admins are still isolated in Tier 0.

if the setting for "T1-SystemsAccessibleTo-T0-System" results in "Deny access to this computer from the network" for the security groups "Tier0-Users" and "Tier0-Computers", Domain Controllers wouldn't have the exception they should get, would they?

Thanks for pointing this out. I have corrected this in the article.

Could you please advice how i can proceed below ?

"It would be another great idea to add them to the "Protected Users" security group introduced with Windows Server 2012 R2, again the RID500 Administrator being an exception"

Why RID500 domain Administrator would need an exception?