We have been using task sequence to patch all Windows servers update monthly for years.

Recently the task sequence is deployed to UAT servers and all working as it usually does. Then a week later the same task sequence failed for the rest of production servers contains multiple servers OSes and no Windows Updates were installed. 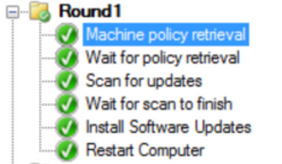 The smsts.log log shows it stops at this event and then time-out after 1 hour

We then added a variable SMSTSSoftwareUpdateScanTimeout = 7200 to the top of task sequence to wait for 2 hours instead if 1 hour by default.

We then compare with the smsts.log of a successful task sequence just before the issue, there was only 2 secs between Waiting for notification... and Notification received... event as below

Does anyone have any ideas why there was exactly 90 mins pause between these two events where as should only take seconds to happen? This 90 mins pause happening on all OS version from Windows Server 2016, 2012R2, Windows 10 Ent , ...

Also, If we go to Software Center --> Updates --> Click Install. All updates are installed just fine.

We have created a case with MS support for a week now but no idea yet.

We could not find out the reason even after spending months with MS support.

However, the same task sequence is now working again as it should without 90 mins waiting when doing Apr 2022 Windows Patching.

It was a mystery.