The focus of this blog is to provide more insights on what happens behind the scenes and help Configuration Manager users and administrators to understand the concept better.


Note: The content library is also known as the “single-instance store”, referring to the single instance of any particular file.


The rationale for content library is to optimize disk storage and to avoid distributing a file that already exists on the distribution points.


If two different packages each contain a particular file that is identical (even if the file names are different), only one copy of this file will be stored by the content library.  This minimizes the disk space consumption.


The content library is typically stored on the root of a drive in a folder called “SCCMContentLib”.  This folder is shared and has restricted permissions to prevent accidental damage.  Within this are the Package Library (“PkgLib” folder), the Data Library (“DataLib” folder), and the File Library (“FileLib” folder).  The Package Library contains information about what packages are present on the distribution point.  The Data Library contains information about the original structure of the packages.  The File Library contains the original files in the package; this is typically where the bulk of the storage is used. 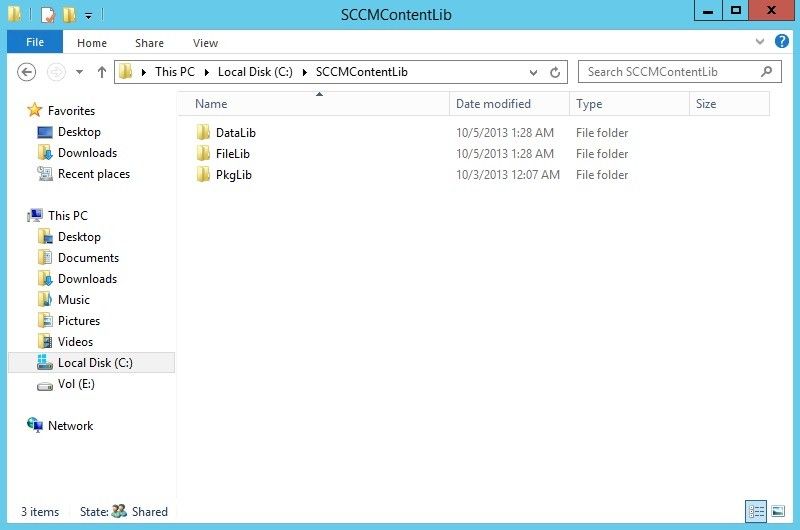 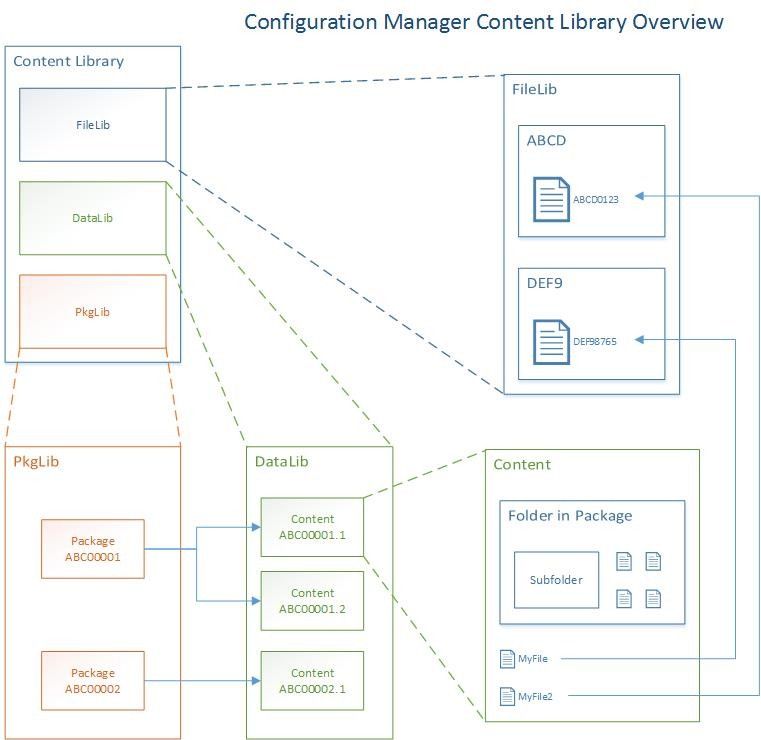 
The starting point for exploring the content library is the Package Library folder, “PkgLib”.  Within this folder will be several files, one for each package distributed to the distribution point.  The name will be the package ID, e.g. ABC00001.INI.  In this file is a list of contents IDs (under the “[Packages]” section) that are part of the package, as well as other information, such as the version.  Using these content IDs, we can continue exploring the contents of the content library.  Let us assume that ABC00001 is a legacy-style package, at version 1.  Thus, the content ID in this file will be ABC00001.1.


Once we have found the content IDs we are interested in, we can continue exploring the content library.  In the Data Library folder, “DataLib”, there will be one file and one folder for each of the contents in each package.  This file and folder will be named, for example, ABC00001.1.INI and ABC00001.1, respectively.  The file contains information for validation.  Inside the folder, the folder structure from the original package is recreated.


There is a new tool available in the System Center 2012 R2 Configuration Manager toolkit called “Content Library Explorer”.  This tool facilitates user-friendly exploration of the contents of the content library.  This tool cannot be used to modify the contents, but can provide insight into what is present, as well as allowing validation and redistribution.  Please refer to the toolkit documentation for more information. This documentation is installed with the toolkit.  There is typically a shortcut for it in the start menu called "System Center 2012 R2 Configuration Manager Toolkit Help".


The content library can be spanned across multiple drives.  These drives can be manually chosen by the administrator at the time the distribution point is created.  Alternatively, they can be chosen automatically by Configuration Manager (this is the default setting).


If “Automatic” is chosen, Configuration Manager selects the drive with the most available free space as its primary drive.  All of the metadata will be stored on this drive.  Only the File Library will be spanned across to secondary drives.  The administrator selects a reserve space amount; Configuration Manager attempts to use a secondary disk once the best available disk has only this reserve space amount left free.  Each time a new drive is selected for use, the drive with the most available free space is selected.


Currently it is not possible to specify that a distribution point should use all drives except for a specific set from the console.  It can be prevented by creating an empty file on the root of the drive, called exactly “NO_SMS_ON_DRIVE.SMS”.  This file must be present before the drive is selected for use by Configuration Manager.  If Configuration Manager detects this file on the root of the drive, it will not use the drive for the content library.  Additionally, there is a command-line tool in the toolkit for permanently moving the content library to a different drive, called “ContentLibraryTransfer.exe”.


Azure distribution points do not use single instancing.  This is because packages are encrypted before they are sent, and each package has a unique encrypted key.  So, even if two files were identical, the encrypted versions would not be.


Here are a few tips for troubleshooting issues with the content library:


On occasion, it is possible for, files, contents, or packages to be orphaned on a distribution point—they are not distributed to the distribution point, but due to an error during deletion, they were not deleted.  Often this is due to external programs (such as antivirus) having file locks on the content when deletion is attempted by Configuration Manager.


This is a known issue.  The operability of Configuration Manager is not affected; the distribution point will still function as intended.  However, this orphaned content can waste disk space.  We are investigating ways to clean up the existing orphaned content in future releases of the toolkit, as well as fixing the product to ensure that no future content is orphaned.


It is not recommended to alter, add, or remove any files or folders in the content library.  Doing so could corrupt packages, contents, or the content library as a whole.  If missing, corrupt, or otherwise invalid data is suspected, the validation feature in the Configuration Manager console should be used to detect this, and the redistribution feature used to correct it.