Because employees use a wide variety of devices (such as Windows x86 and x64 PCs, laptops, Windows RT tablets, Windows Phones, iPads, iPhones and Android devices), it becomes very difficult for the IT admin to manage applications built for different device platforms and deploy them to different devices for end users. As noted in Brad Anderson’s People Centric IT blog post Making Device Users Productive and Protecting Corporate Information, with Configuration Manager and Windows Intune, we’ve made it easy to ensure that applications are delivered in the optimal method for each device to ensure worker productivity.


Configuration Manager allows the administrator to model the application with multiple deployment types (for example, MSI installers, Windows Store links, iOS applications, etc.) and then to deploy it to collections of users or devices.


The application evaluates the user’s device type and other requirements (for example, the amount of free storage space, etc.) specified by the administrator to select the appropriate deployment type to install on the user’s device. So whether your employee is using a laptop, VDI session, an iPad, or all of those, it can deliver the app to that user with the best experience on each device.  Because of the integration between Windows Intune and Configuration Manager, you can now extend application delivery to all major device types by using a single management console.  Applications can include locally installed MSI packages, side-loaded Windows 8 modern applications (appx), App-V virtual applications on Windows devices, remote applications using Microsoft virtualization solutions, web links, or public applications stored in the Windows Store, App Store, or Google Play. Compliance reporting is available for the application across all the deployment types, making it easy for IT Admins to keep track of overall compliance while at the same time monitoring any issues with particular deployment types. The diagram below illustrates the flexibility offered by the application model to deploy to the user and choose the appropriate app delivery mechanism based on the user’s device.


With the release of System Center 2012 R2 Configuration Manager, we have added quite a few new features for application management. Here is a quick overview of the new features:


In order to configure this feature, there are 2 steps: 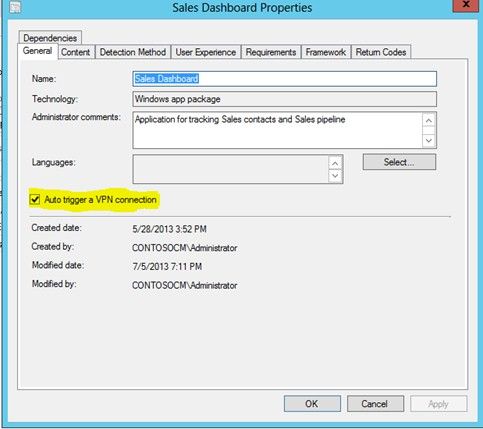 
Note: This feature is currently supported only on non-domain joined Windows 8.1 devices.


In summary, user centric application management with Configuration Manager and Windows Intune helps IT admins to provide the right set of applications to employees on their devices of choice while easily managing the application lifecycle for the corporate applications.


To see all of the posts in this series, check out the What’s New in Windows Server & System Center 2012 R2 archive.