when adding a wiki article (or section), there is a possibility to add a conversation. This is where, I firstly found the Teams feature for translating content from another language. In the screenshot below, I added the first step to reach the feature from the wiki.

Once this is done, a new conversation will appear on the right. I tested this with some English text, I have taken from wikipedia. Once I added a new conversation, it appears on the right and autofills some text and a name. On the 3-dots menu, you can select Übersetzen (Translate). All ok until then. 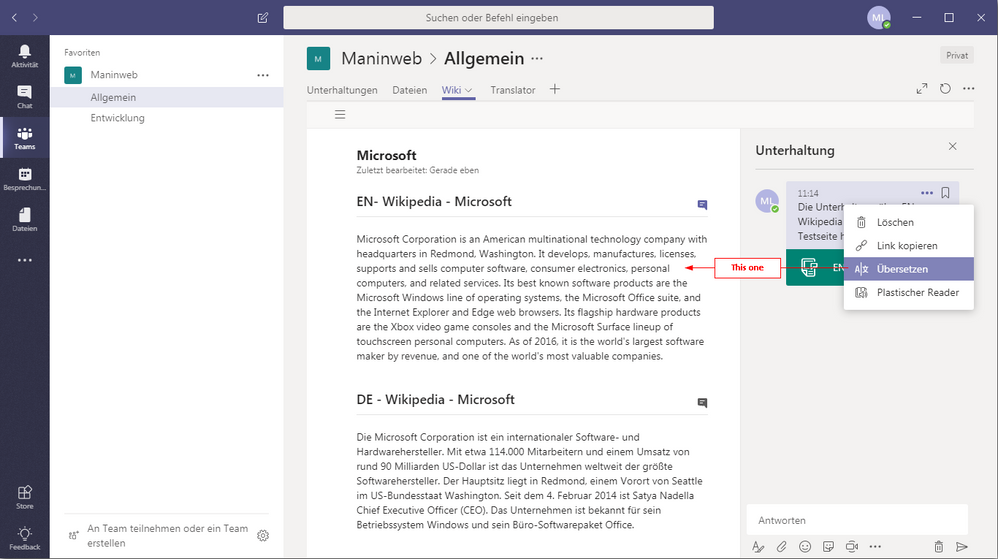 However, at that time, it was not clear for me to what the text (I supposed the sections content) will be translated. To German? And also nothing happened to the text. But a new icon appeared on the left side. 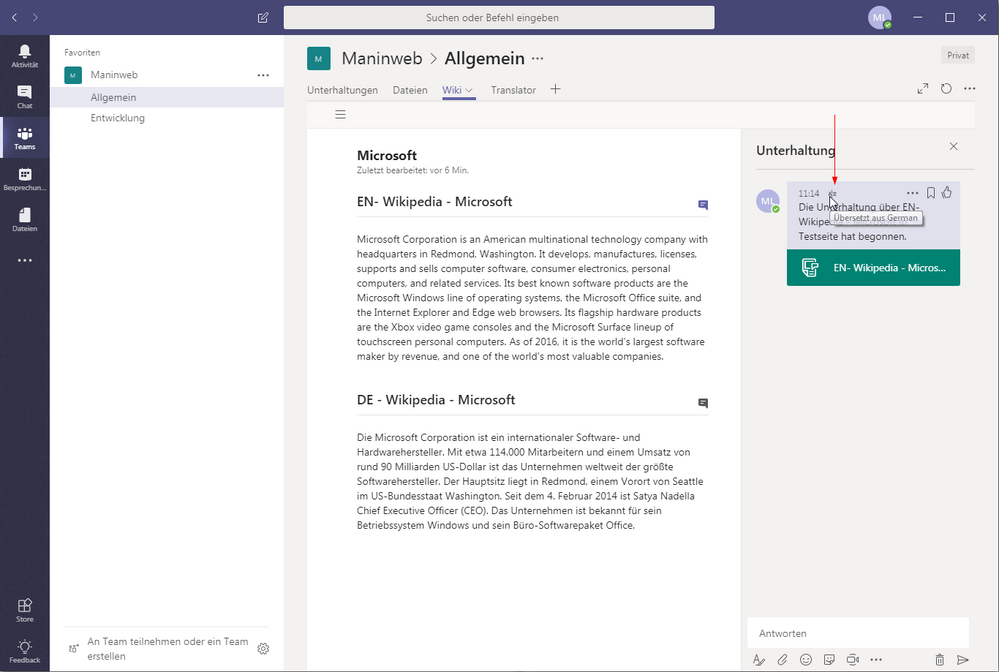 The tooltip for this icon mentions the language in its translation: Übersetzt aus German The language name is untranslated. So, that's for me a translation issue in the tooltip.

I then gave it a try with the section with the German text from Wikipedia and nothing happens too. The tooltip also shows Übersetzt aus German - which in this case imho does not make sense. 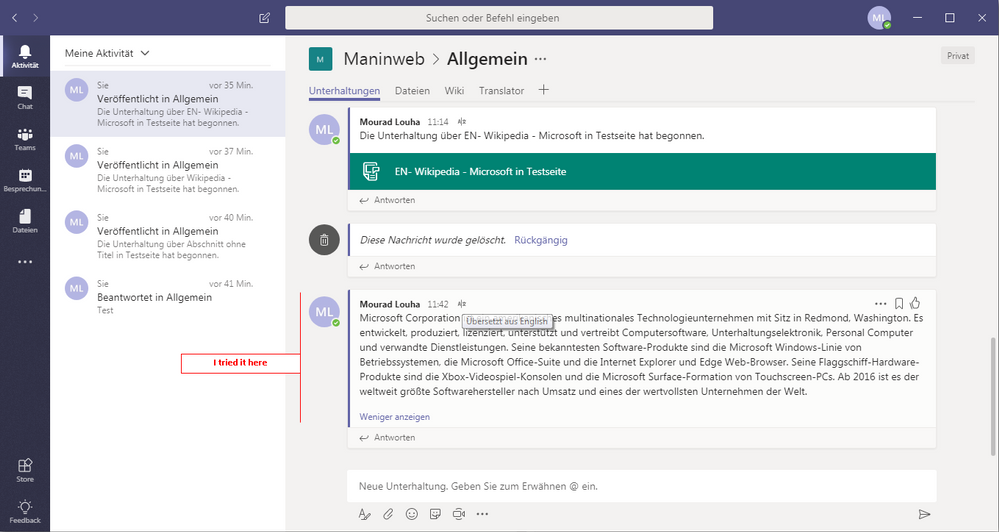 Here, it works fine and the English text is translated to German. But the tooltip has the same issue, as it mentions the language in English.

I have an additional thought about the wiki related conversation: maybe the feature is not intended to translate the wiki section and I misunderstood it in this case. If so, would it then make sense to not have it available for the conversations started in the wiki?

Thanks for your entry into the Teams competition and the additional feedback, we're looking into it!
0 Likes
Reply
Highlighted

That would be a very useful feature for wikis.
In multinational business, the wiki content should be available in different languages for internal users. Translating, updating and maintaining all the content is an effort that may make the wiki a tool more demanding of workload for IT administrators than useful for internal users.

Is it in the workpath of Team's dev team?

I agree to you, that for a wiki, localized versions would be great for internal users. However, I think, that machine driven translations do not reach the quality of human translations - even if some progress was made in the last years by MT. I would prefer to translate it manually and that would then be a separate article. I also think, that the Teams Wiki is a relatively simple app, e.g. it does not support versioning and searching as far as I know. May be there are more advanced apps out there. Personally, I use the wiki as a kind of reference book and notepad.

@Mourad Louha What you mention is quite interesting, didn't know it was available before, but I can't find it now neither. I understand that the auto-translation maybe was confusing for different languages in some cases, but not allowing to translate the wiki makes it a simple txt file out of sense. Wiki's in many groups may be useful to grant work procedures, instructions for tools, frequently asked questions...

Making available wikis in different languages for users makes the training and knowledge transference easier, but if there has to be one wiki page by each language in the company and by each manual it could be chaotic.

I understand that one of the keys of this communities is to provide the developers new features that final customers may find useful. In line with this, maybe allowing a wiki administrator or some collaborators from different countries to review the translation would be a good idea to improve this tool.

yes, I agree to that could be a risk, that a lot of translations of the same page could lead to some chaos.

I would like to suggest you https://microsoftteams.uservoice.com (in case you didn't already know about the site) for suggesting features for MS Teams or giving them feedback. I think, posting ideas there would get more attention, as this forum is in general more focussed on the localization of the Office 365 products.