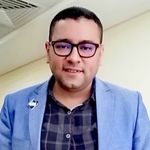 Hello everyone! My name is Mohamed El-Qassas, and I'm a Microsoft MVP who recently joined the Microsoft Ninja blogger team. I'm excited to start sharing valuable information with our community.

Today, I'm going to go through the most crucial announcements that Satya Nadella introduced in Microsoft Build 2022. But before we begin, let's get to know one other. What exactly is Microsoft Build?

Microsoft Build is the biggest annual conference event held by Microsoft, it is aimed at software engineers and developers using Microsoft technologies. 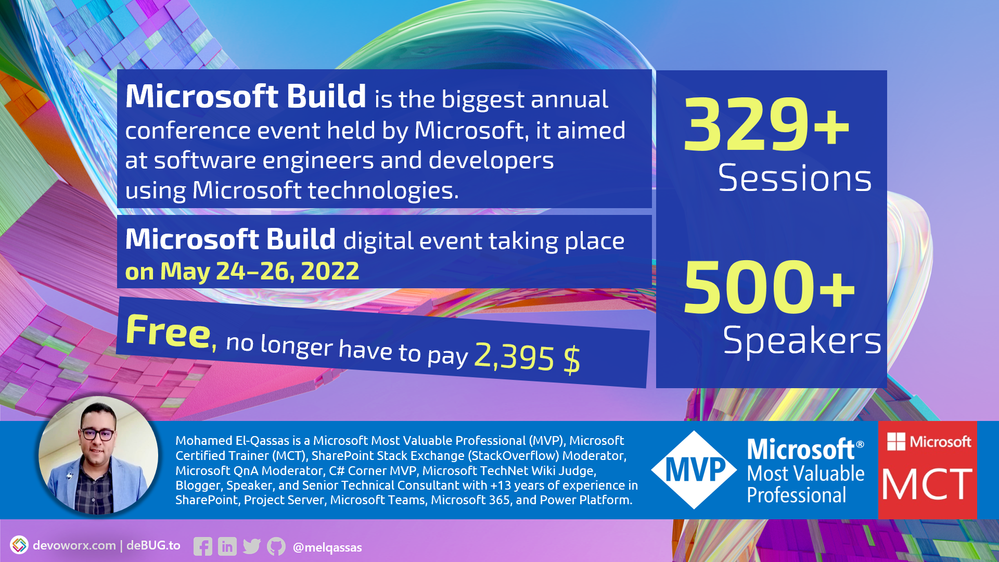 In Microsoft Build Event, you can

At Microsoft Build 2022, Microsoft introduced more than 50+ new updates and services across the tech stack to make creating easier for every developer. 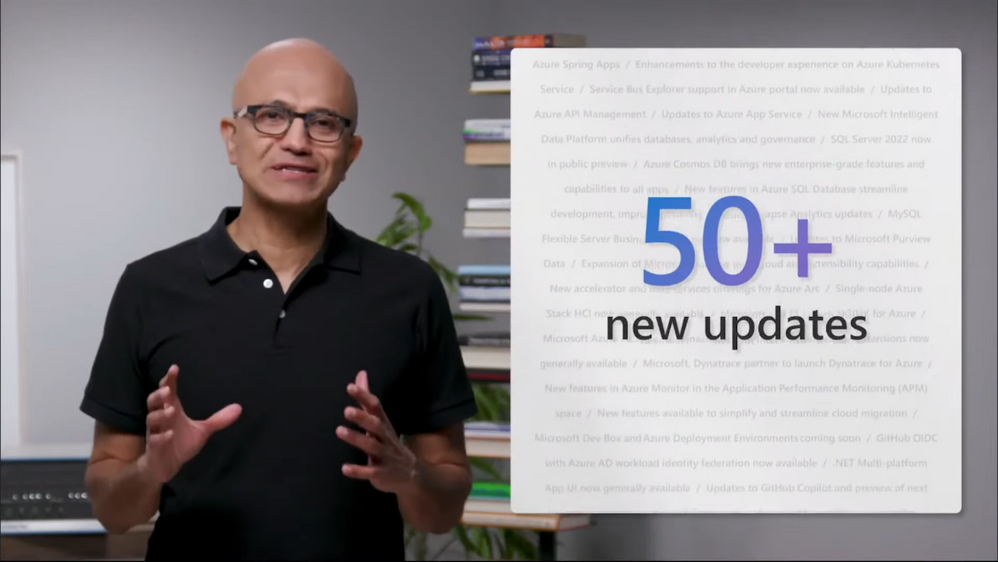 In this post, we are trying to list and review most of these important announcements categorized by the top 10 technologies that are coming together as a powerful platform to help you build. 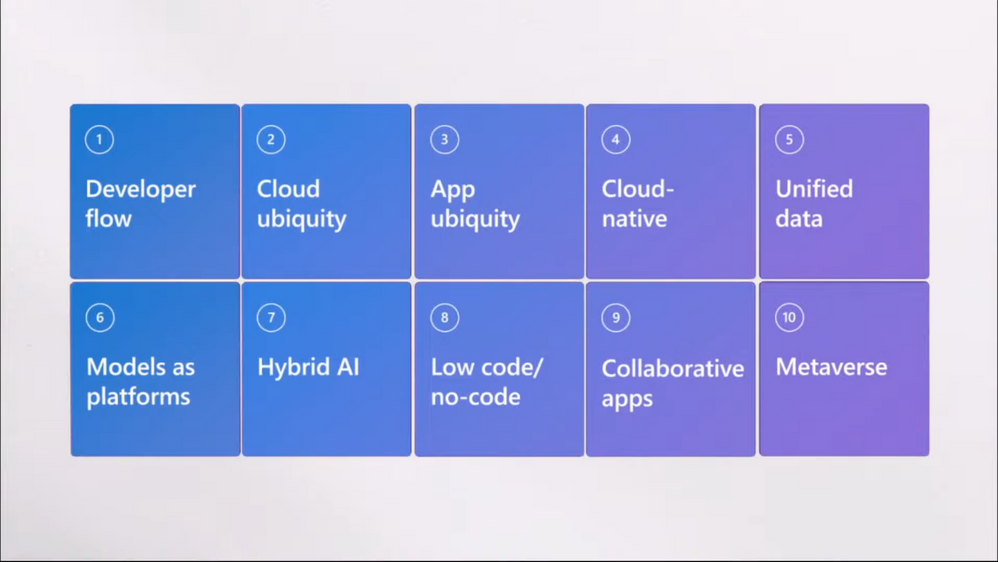 Every day the developer’s community builds products and services that reach every corner of the world and touch everyone. 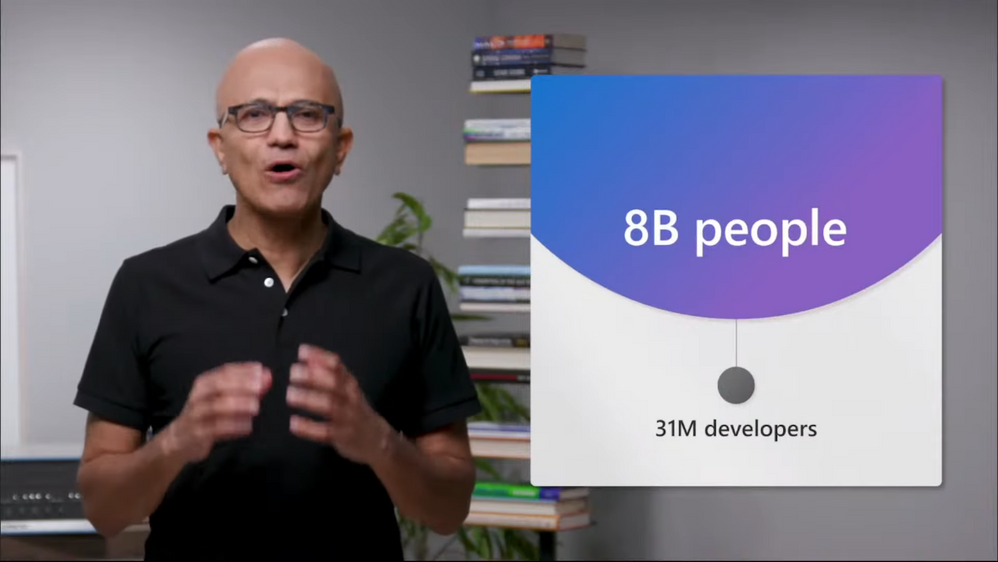 So, it all starts with your flow as a developer, and when you think about your flow it's more than the speed at which you work. It’s about getting in the zone and staying there.

Microsoft wants to make it easy for us as a developer to go from idea to code and code to cloud and cloud to the world. 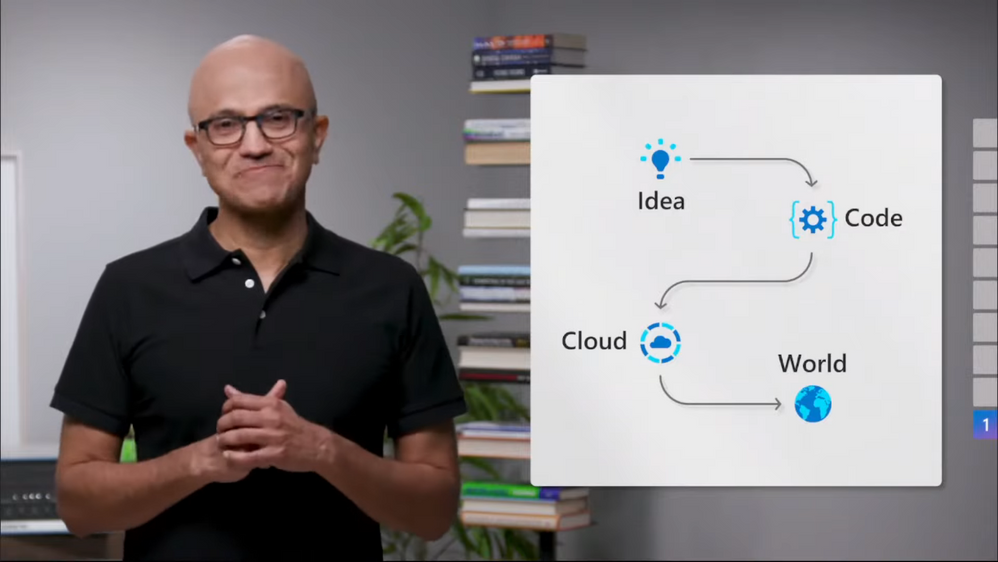 As we know, Microsoft's approach starts with GitHub as the home for every developer, and last year, Microsoft introduced GitHub code spaces to address these code spaces in your entire developer environment including the full power of VS code hosted in the cloud and accessible via the browser. You can spin up a new Linux-based dev environment for any size project with pre-built images in seconds.

So, Microsoft is so excited to announce the Microsoft Dev Box to set up a new dev box whenever you start a project to investigate a bug in an older code base on board a colleague or learn new technology. 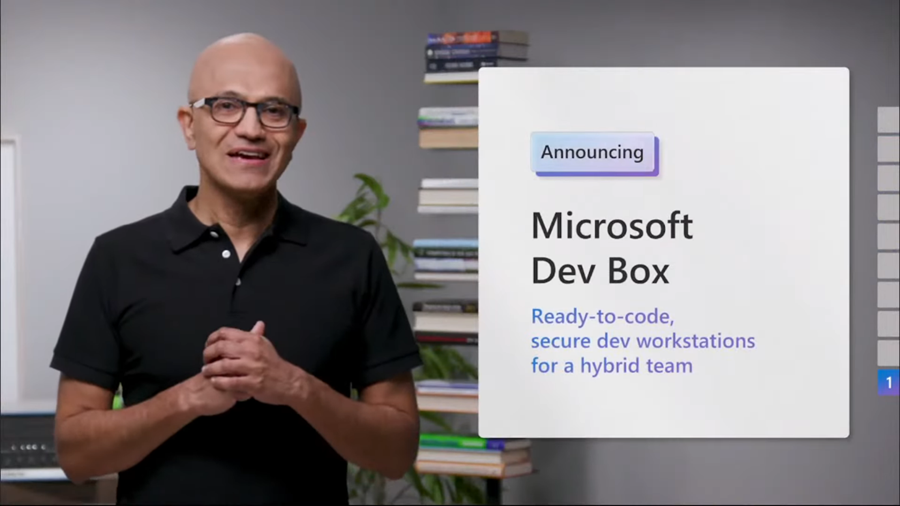 It’s a fully managed service built on Windows 365 to spin the beefiest of VMs with all the tools connected services and network resources you need pre-provision. So you can get to code quickly while ensuring that your dev box always stays secure and compliant.

Microsoft Dev Box is in private preview and will be in public preview in the next few months, and you can sign up for the waiting list to evaluate the private preview at http://aka.ms/devbox-signup

Another announcement that it's incredibly powerful and would help you to stay in your flow was related to the GitHub Copilot that Microsoft introduced as a preview a year ago and the feedback has been fantastic!

So, Microsoft is excited to share that it will make co-pilot generally available for developers later this summer and everyone who's registered for build today will have free access through GA. It’ll also make co-pilot free for students as well as verified open-source contributors. 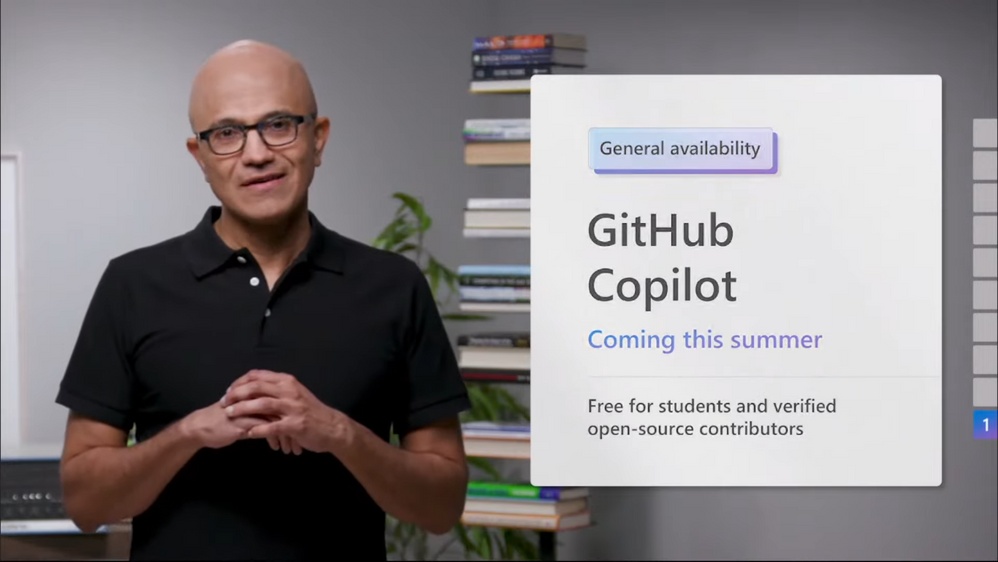 GitHub Copilot is considered your AI pair programmer and you could collaborate with and would help you learn new frameworks and best practices.

In the ubiquity of the cloud, Microsoft is seeing a major acceleration in the build-out of a highly distributed computing fabric from the cloud to the edge as they embed computing everywhere.

Azure is the world's computer with 60-plus data center regions connected by over 175 000 miles of fiber over 190 points of presence this delivers faster access to cloud services while addressing the critical data residency requirements and Microsoft is not stopping there. 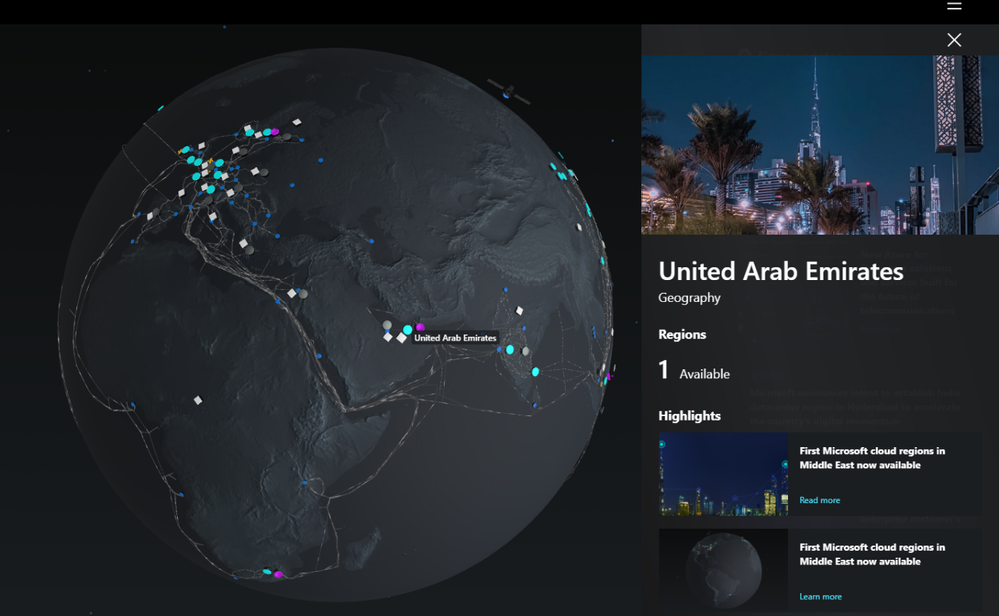 With Azure ARC, Microsoft is bringing the power of Azure anywhere customers now can run mission-critical data workloads in their own environments while meeting latency and regulatory requirements with azure for operators. 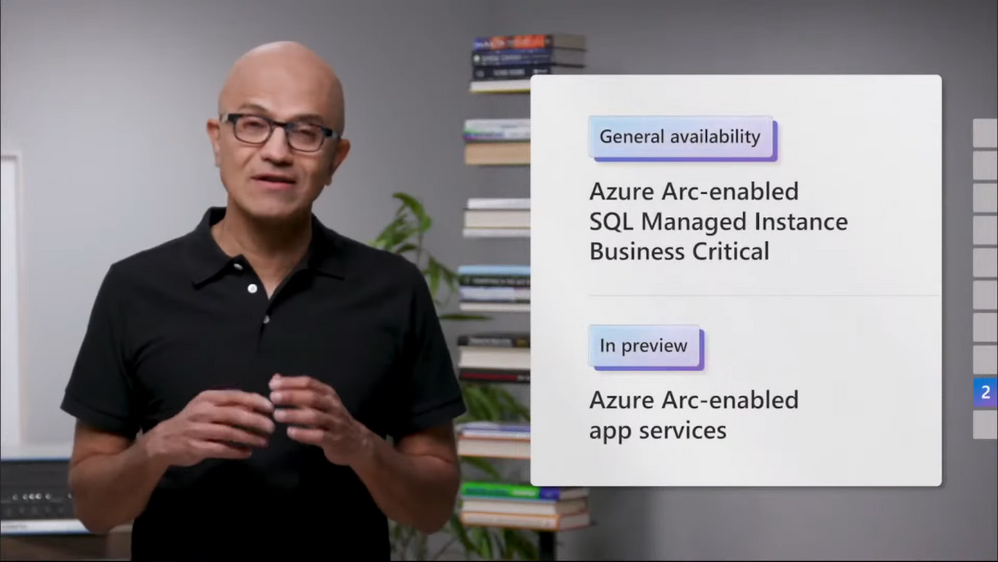 With Windows 11, Microsoft announced the new Microsoft store which is rebuilt from the ground up to give you maximum openness and flexibility.

Microsoft wants you to bring your apps to Microsoft Store regardless of whether they were built as a native windows app a progressive web app or any other app framework.

In Microsoft Build 2022, Microsoft is excited to announce Microsoft Store Ads as a new way to help you reach the right customers at the right time. Now, you have the choice to use the Microsoft commerce engine with industry-leading revenue share or you can bring your own commerce engine to your apps and keep 100 of the revenue and remember if you're targeting windows you're effectively targeting every device with Windows 365.

Containers have emerged as the industry standard to go from code to cloud-native and to scale from zero to infinity as your load in business requires. 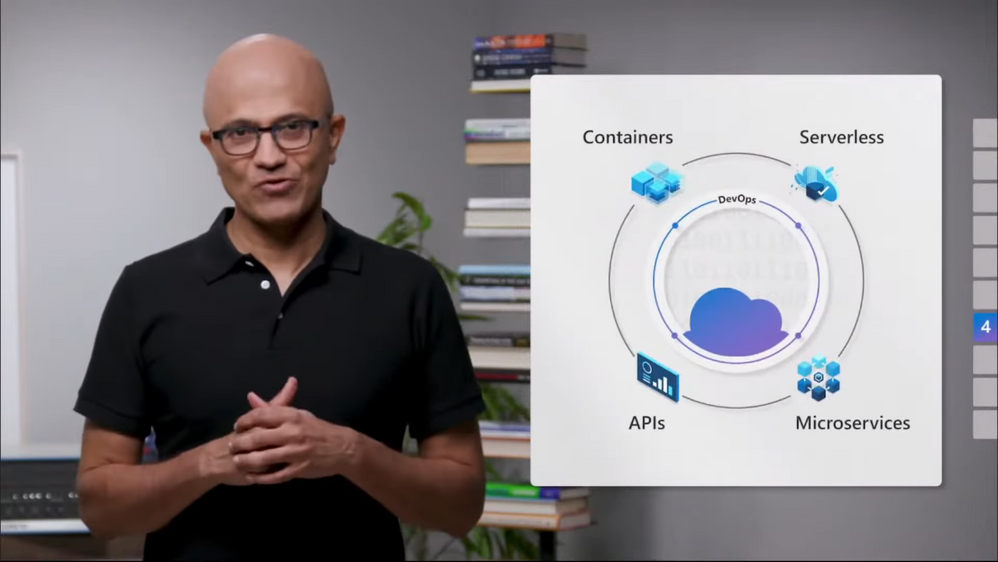 Microsoft has been super excited about the response to the preview of Azure container apps to fully managed serverless container service for building and deploying modern apps at scale.

It allows you to create modern apps based on open standards, and it's all built on Kubernetes so you can get the benefits of the open ecosystem but no prior Kubernetes experience or knowledge is required you can easily deploy containerized apps from Docker containers or source code repos without having to worry about managing your own infrastructure and your apps can scale in response to HTTP traffic or event triggers. 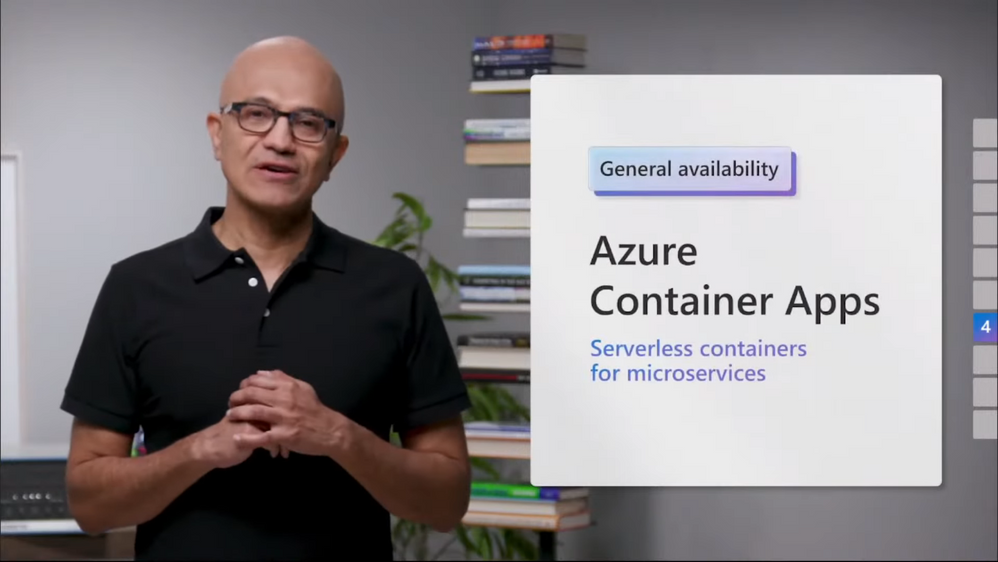 Another announcement that is in the private preview was the Azure confidential computing which helps you build not just for scale but also for confidentiality. 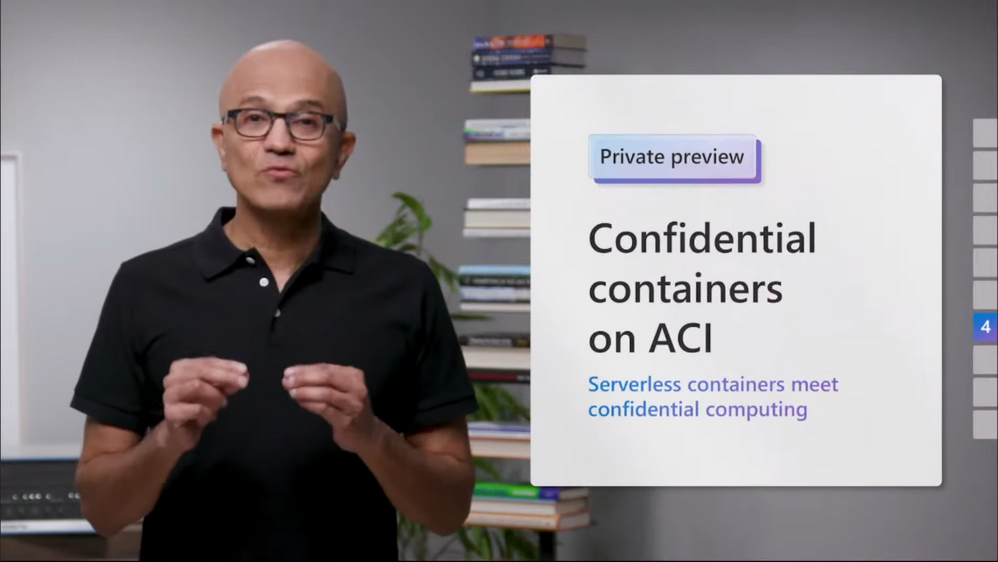 It protects data when in use as well as at rest and in transit. 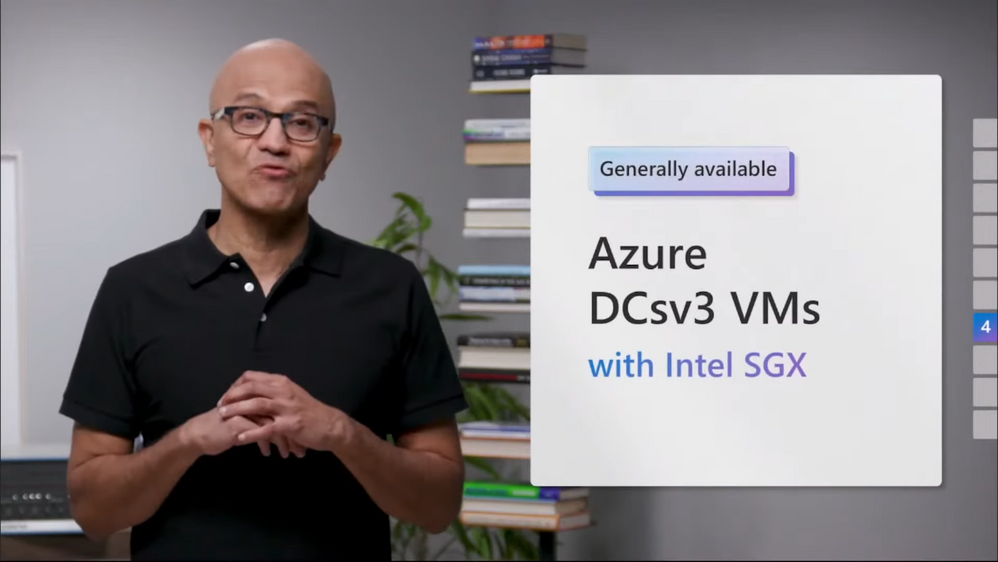 Today though developers struggle with the silos that too often exist between databases analytics and governance data engineers data scientists and business analysts struggle with the complexity of making data integration data warehousing and BI all come together.

Data and privacy offices struggle to meet the regulations when governance is not deeply integrated into the products they're supposed to monitor that's why instead of thinking about databases analytics and governance as separate things we are architecting these pieces together as part of one intelligent data platform. 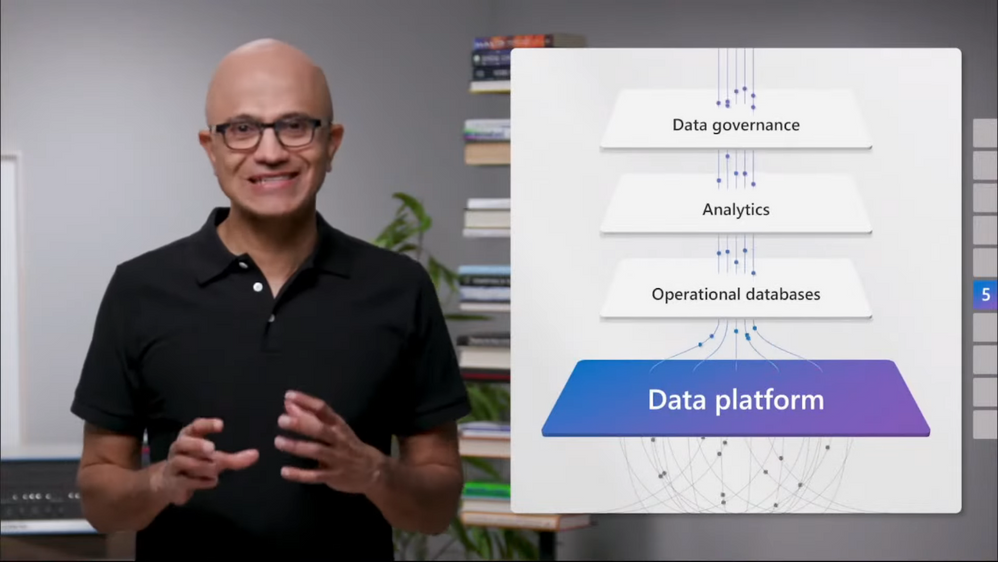 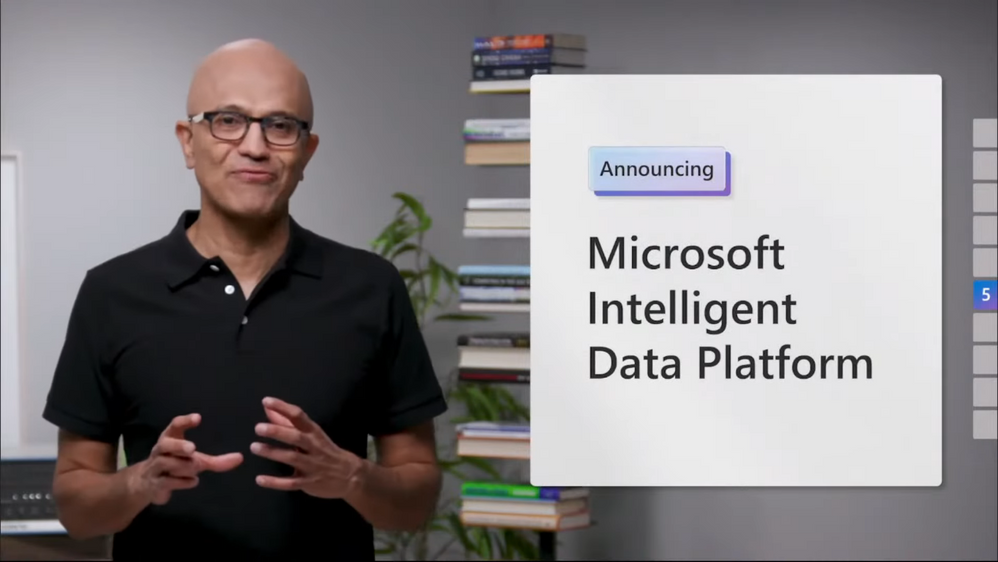 In Azure, Microsoft has built the most powerful AI supercomputer in the world and they've used it to train this large state-of-the-art AI model.

These the below announcements related to the this sections Similarly inspired by GitHub co-pilot, Microsoft envision a world where everyone no matter their profession can have a co-pilot for everything they do! 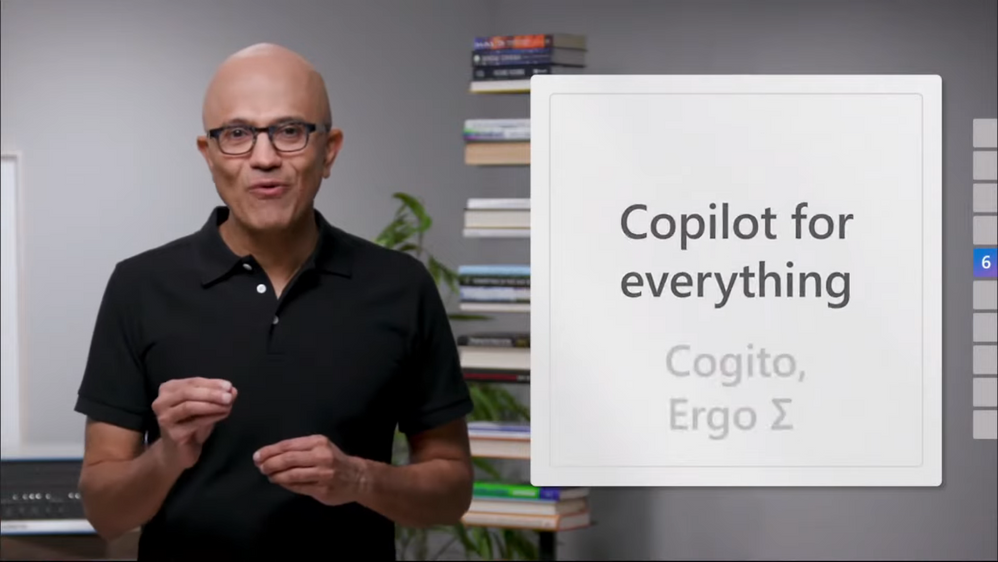 Whether to run inference on Azure or the local client it can also dynamically shift the load between clients and the cloud. This is what Microsoft is calling the hybrid loop. 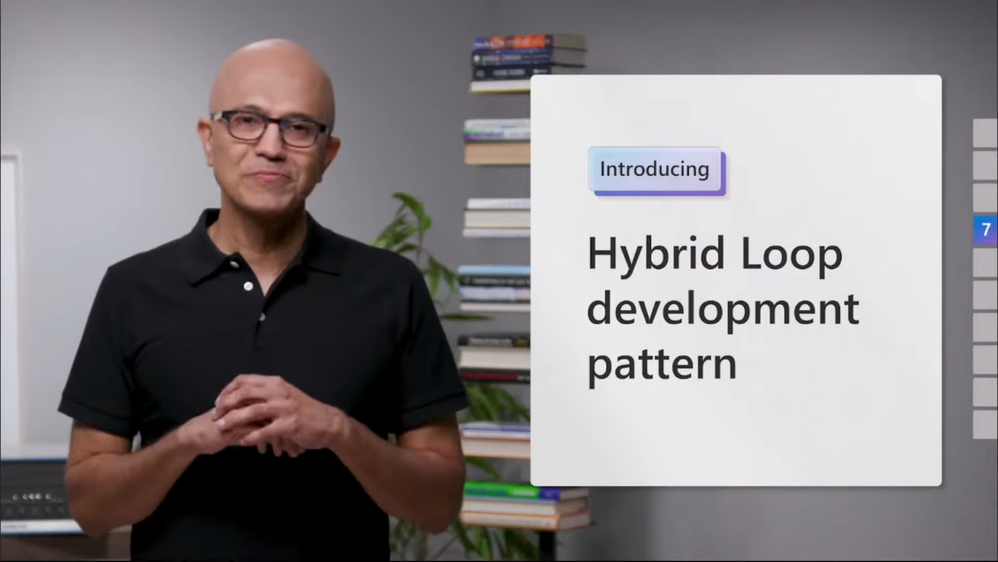 The hybrid loop is a powerful, cross-platform development pattern for building AI experiences spanning the cloud and edge.

Also, Microsoft has announced its first ARM desktop PC in the form of a developer kit it calls "Project Volterra." It's a small, Mac mini-style desktop that's designed to help developers build apps that leverage the power of AI using a built-in neural processing unit (NPU) built by Qualcomm.

It's a Windows Dev kit with an arm CPU and GPU and it includes native arm 64 visual studio and .Net support to provide the same fast familiar and highly productive experience that you're used to.

Project Volterra will be available later this year and you can get started today by building on our cloud and taking advantage of all these fantastic AI tooling and services, and it's just the beginning of what will be possible. 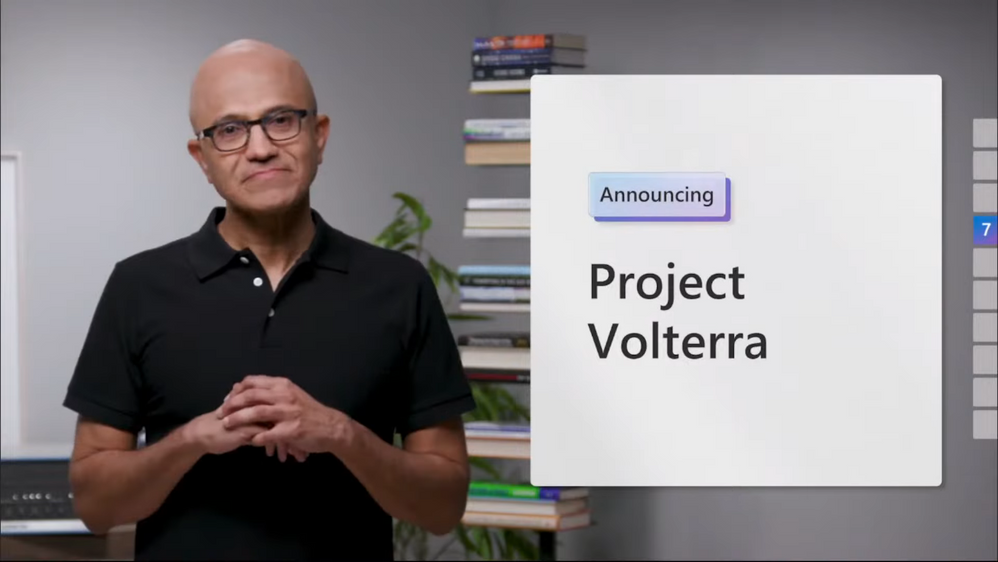 In Microsoft Build 2022, Microsoft announced the Express Design in PowerApps where you can upload a pdf a PowerPoint, or even a hand-drawn sketch and express design will convert it into an app within seconds. It’s something like Sketch2Code.

This includes a complete UI that's built from your design with a back-end data schema it's easy to check and modify all of the created components.

You can further modify any part of the app to match your own design and if you want to add more screens you can simply repeat the process until your app is completed. 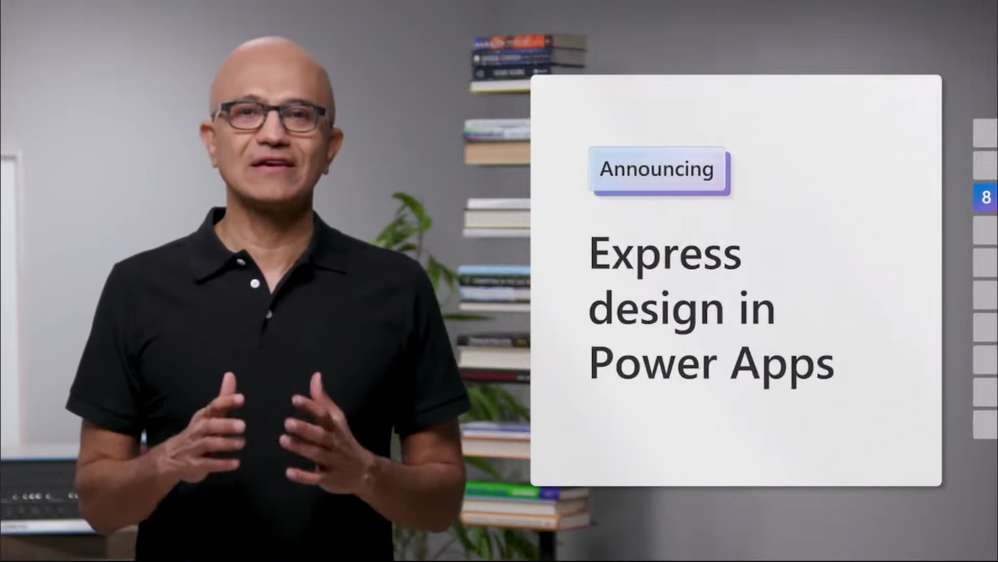 You can also build a prototype in Figma, upload the design into PowerApps and have a working app in seconds to leave developers to focus on data and backend logic by the way. 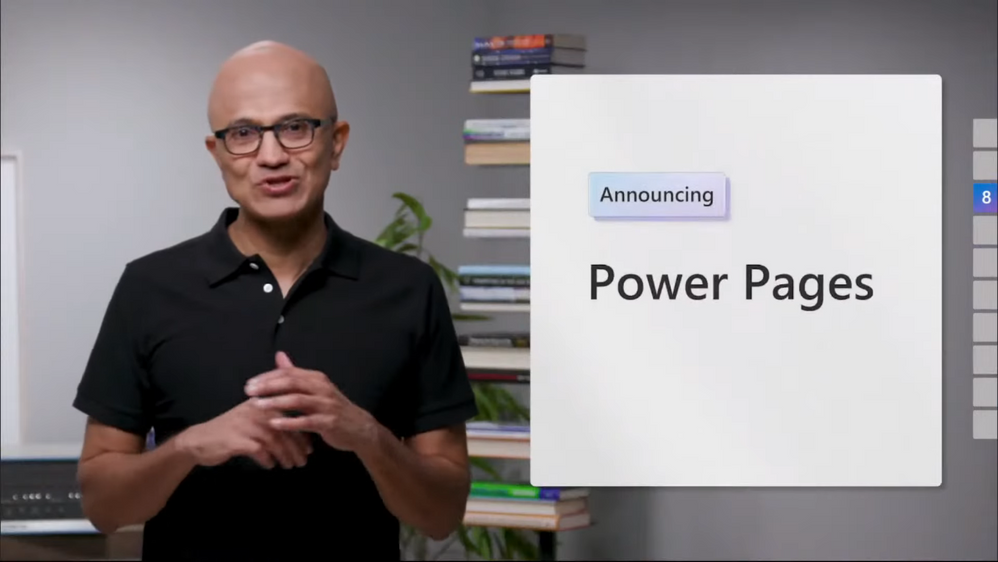 You can build a new class of collaborative applications with Microsoft graph which underlies Microsoft 365 and makes available to you information about people their relationships and all of their artifacts. 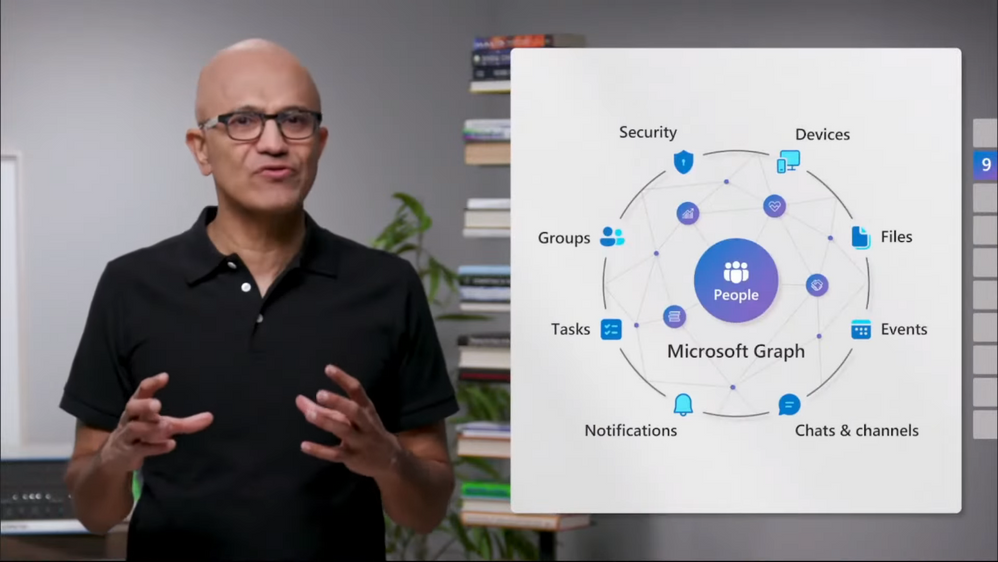 More than half of the Microsoft 365 tenants are using custom-built and third-party apps powered by the graph. It's incredibly powerful and developers are extending their apps into teams and embedding teams in their apps.

In fact, monthly usage of third-party apps and custom-built solutions on teams has grown 10x over the last two years and more and more. 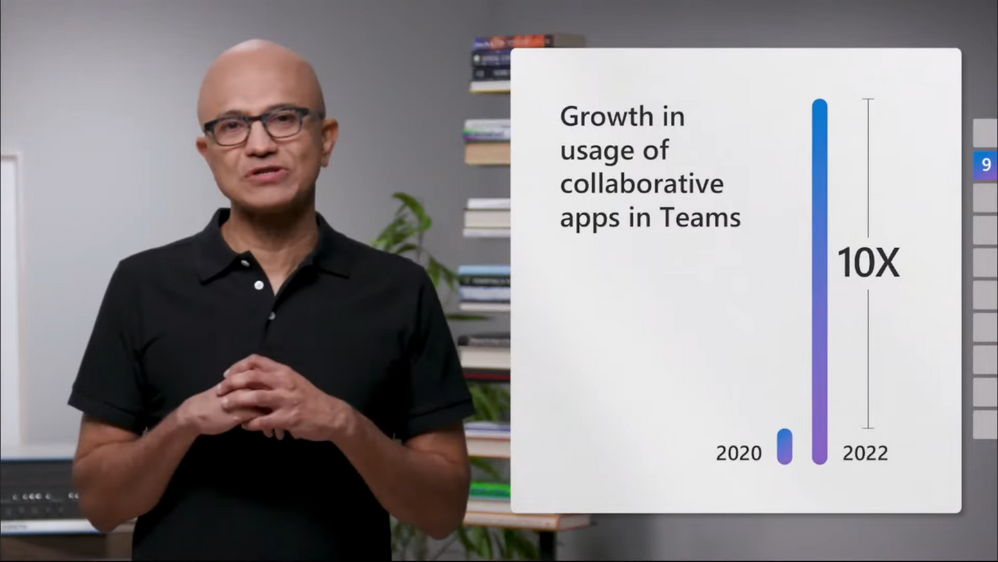 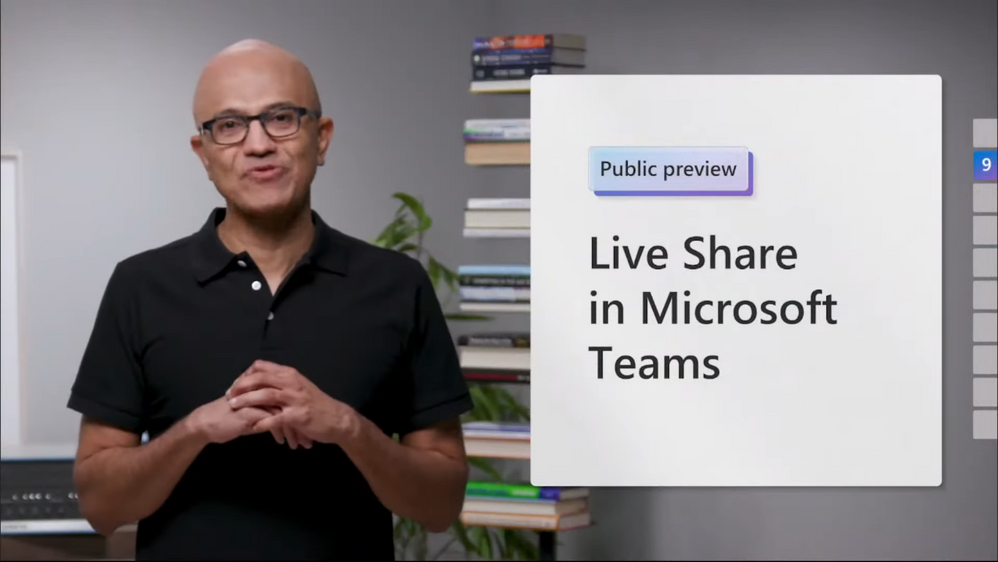 Finally, we can confirm that Microsoft Build 2022 was a well-organized and successful digital event, as usual, and in this post, we have attempted to cover the majority of the important updates and announcements that were shown in the Microsoft Build keynote session, which was introduced by Microsoft CEO Satya Nadella, and it was a very helpful keynote that covered incredible and fantastic announcements and updates.

I'd also want to thank all of the Microsoft Ninja team reviewers, as well as Heba Kamal (Business Application MVP), who served as a co-author on this essay.

I loved to read your insights and I love the first image. It summarizes the statistics in a nice way

Nice one!
The GA of the co-pilot was great news!
Thanks for sharing!