Does anyone know when Scaling plans will be made available in other regions such as UK South? Only Central US, East US and Europe are supported at the moment: 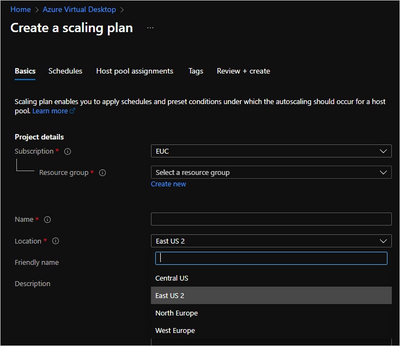 We've been advised by a Microsoft rep that UK South has some kind of capacity issue that is affecting the deployment of additional management functions and features, like this scaling plan feature.

We have engaged our CSP reseller and MS directly to confirm exactly what this means and what other impact this may have, but currently it does not appear that AVD Scaling Plans are coming to UK South anytime soon!

“No there is no timeline or ETA for scaling plans being available in UK South. Azure is facing capacity issues in UK South that are preventing us from being able to deploy there fully. We will be rolling out scaling plans to more regions in the next month, but UK South will not come for a while.”

Then later elaborated with the following,

“It is not necessarily that Autoscale is resource demanding, it is that Autoscale is a microservice within AVD which means that the service in addition to the databases need to be deployed to each region for there to be scaling plan support there. Azure is maxed out in the UK South region and has blocked us from deploying there for a while.”

Sorry for the late reply, thanks for this, looks like we'll still need to use the Azure automation method, it is a tad concerning that UK South will be left behind :(.
0 Likes
Reply