Azure SQL Database is running transparently hundreds of thousands of databases at many different Compatibility Levels, preserving and guaranteeing the backward compatibility to the corresponding version of SQL Server for all its customers!

Starting in June 2016, the Azure SQL Database default will change from 120 to 130 for newly created databases. Databases created before June 2016 won’t be affected and will keep running at the Compatibility Level they were initially created with (100, 110 or 120). The same goes for databases migrated from Azure SQL Database v11 to v12.

In this blog, we will explore what the compatibility level 130 brings at the table, what you should be paying attention to, and how to leverage its benefits and address the possible side-effects on the query performance for the existing SQL applications.


First, if you want to know what’s the current Compatibility Level of your database, execute the SQL statement hereunder.

Before this change for newly created databases happens, let’s get some context, and briefly review what this change is all about through some very basic query examples and see how anyone can benefit from it.

Query processing in relational databases can be very complex and can lead to lots of computer science and mathematics to understand the inherent design choices and behaviors. In this document, the content has been intentionally simplified to ensure that anyone with some minimum technical background can understand the impact of the Compatibility Level change and determine how it can benefit applications.

Let’s have a quick look at what the Compatibility Level 130 brings at the table.  You can find more details at https://msdn.microsoft.com/en-us/library/bb510680.aspx but here is a short summary:


First let’s get some tables, indexes and random data created to practice some of these new capabilities. The TSQL script examples can be executed under SQL Server 2016, or under Azure SQL Database. However, when creating an Azure SQL database, make sure you choose at the minimum a P2 database because you need at least a couple of cores to allow multi-threading and therefore benefit from these features.

Now, let’s have a look to some of the Query Processing features coming with Compatibility Level 130.

-- The INSERT part is in serial

-- The INSERT part is in parallel

By requesting the actual the query plan, looking at its graphical representation or its XML content, you can determine which Cardinality Estimation function is at play. Looking at the plans side-by-side on figure 1, we can clearly see that the Column Store INSERT execution goes from serial in 120 to parallel in 130. Also, note that the change of the iterator icon in the 130 plan showing two parallel arrows, illustrating the fact that now the iterator execution is indeed parallel. If you have large INSERT operations to complete, the parallel execution, linked to the number of core you have at your disposal for the database, will perform better; up to a 100 times faster depending your situation! 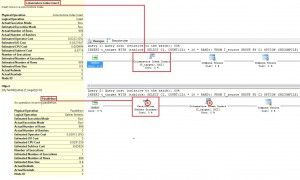 
Similarly, moving to Compatibility Level 130 when processing rows of data enables batch mode processing. First, batch mode operations  are only available when you have a column store index in place. Second, a batch typically represents ~900 rows, and uses a code logic optimized for multicore CPU, higher memory throughput and directly leverages the compressed data of the Column Store whenever possible. Under these conditions, SQL Server 2016 can process ~900 rows at once, instead of 1 row at the time, and as a consequence, the overall overhead cost of the operation is now shared by the entire batch, reducing the overall cost by row. This shared amount of operations combined with the column store compression basically reduces the latency involved in a SELECT batch mode operation. You can find more details about the column store and batch mode at https://msdn.microsoft.com/en-us/library/gg492088.aspx .

-- The scan and aggregate are in row mode

-- The scan and aggregate are in batch mode, and force MAXDOP to 1 to show that batch mode also now works in serial mode.

As visible below, by observing the query plans side-by-side on figure 2, we can see that the processing mode has changed with the Compatibility Level, and as a consequence, when executing the queries in both Compatibility Level altogether, we can see that most of the processing time is spent in row mode (86%) compared to the batch mode (14%), where 2 batches have been processed. Increase the dataset, the benefit will increase. 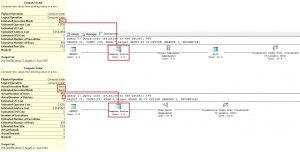 -- The scan and aggregate are in row mode

-- The scan and aggregate are in batch mode, and force MAXDOP to 1 to show that batch mode also now works in serial mode.

Visible side-by-side on figure 3, we can see that the sort operation in row mode represents 81% of the cost, while the batch mode only represents 19% of the cost (respectively 81% and 56% on the sort itself). 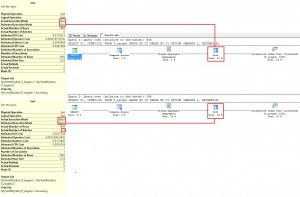 Obviously, these samples only contain tens of thousands of rows, which is nothing when looking at the data available in most SQL Servers these days. Just project these against millions of rows instead, and this can translate in several minutes of execution spared every day pending the nature of your workload.


Introduced with SQL Server 2014, any database running at a Compatibility Level 120 or above will make use of the new Cardinality Estimation functionality. Essentially, cardinality estimation is the logic used to determine how SQL server will execute a query based on its estimated cost. The estimation is calculated using input from statistics associated with objects involved in that query. Practically, at a high-level, Cardinality Estimation functions are row count estimates along with information about the distribution of the values, distinct value counts, and duplicate counts contained in the tables and objects referenced in the query. Getting these estimates wrong, can lead to unnecessary disk I/O due to insufficient memory grants (i.e. TempDB spills), or to a selection of a serial plan execution over a parallel plan execution, to name a few. Conclusion, incorrect estimates can lead to an overall performance degradation of the query execution. On the other side, better estimates, more accurate estimates, leads to better query executions!

As mentioned before, query optimizations and estimates are a complex matter, but if you want to learn more about query plans and cardinality estimator, you can refer to the document at https://msdn.microsoft.com/en-us/library/dn673537.aspx for a deeper dive.


Which Cardinality Estimation do you currently use?

Once execution is complete, click on the XML link, and look at the properties of the first iterator as shown below. Note the property name called CardinalityEstimationModelVersion currently set on 70. It does not mean that the database Compatibility Level is set to the SQL Server 7.0 version (it is set on 110 as visible in the TSQL statements above), but the value 70 simply represents the legacy Cardinality Estimation functionality available since SQL Server 7.0, which had no major revisions until SQL Server 2014 (which comes with a Compatibility Level of 120).

Figure 4 The CardinalityEstimationModelVersion is set to 70 when using a Compatibility Level of 110 or below.

Simply moving to the Compatibility Level 120 or 130 enables the new Cardinality Estimation functionality. In such a case, the default CardinalityEstimationModelVersion will be set accordingly to 120 or 130 as visible below.

Figure 5 The CardinalityEstimationModelVersion is set to 130 when using a Compatibility Level of 130.


Now, let’s run a slightly more complex query involving an INNER JOIN with a WHERE clause with some predicates, and let’s look at the row count estimate from the old Cardinality Estimation function first.

-- Old CE row estimate with INNER JOIN and WHERE clause

Executing this query effectively returns 200,704 rows, while the row estimate with the old Cardinality Estimation functionality claims 194,284 rows. Obviously, as said before, these row count results will also depend how often you ran the previous samples, which populates the sample tables over and over again at each run. Obviously, the predicates in your query will also have an influence on the actual estimation aside from the table shape, data content, and how this data actually correlate with each other. 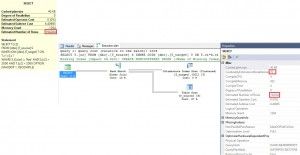 In the same way, let’s now execute the same query with the new Cardinality Estimation functionality.

-- New CE row estimate with INNER JOIN and WHERE clause

Looking at the below, we now see that the row estimate is 202,877, or much closer and higher than the old Cardinality Estimation.

In reality, the result set is 200,704 rows (but all of it depends how often you did run the queries of the previous samples, but more importantly, because the TSQL uses the RAND() statement, the actual values returned can vary from one run to the next). Therefore, in this particular example, the new Cardinality Estimation does a better job at estimating the number of rows because 202,877 is much closer to 200,704, than 194,284! Last, if you change the WHERE clause predicates to equality (rather than “>” for instance), this could make the estimates between the old and new Cardinality function even more different, depending on how many matches you can get.

Obviously, in this case, being ~6000 rows off from actual count does not represent a lot of data in some situations. Now, transpose this to millions of rows across several tables and more complex queries, and at times the estimate can be off by millions of rows , and therefore, the risk of picking-up the wrong execution plan, or requesting insufficient memory grants leading to TempDB spills, and so more I/O, are much higher.

If you have the opportunity, practice this comparison with your most typical queries and datasets, and see for yourself by how much some of the old and new estimates are affected, while some could just become more off from the reality, or some others just simply closer to the actual row counts actually returned in the result sets. All of it will depend of the shape of your queries, the Azure SQL database characteristics, the nature and the size of your datasets, and the statistics available about them. If you just created your Azure SQL Database instance, the query optimizer will have to build its knowledge from scratch instead of reusing statistics made of the previous query runs. So, the estimates are very contextual and almost specific to every server and application situation. It is an important aspect to keep in mind!

At the high-level, if you already have a set of databases running at Compatibility Level 120 or below, and plan to move some of them to 130, or because your workload automatically provision new databases that will be soon be set by default to 130, please consider the followings:


Using Azure SQL Database to benefit from all SQL Server 2016 enhancements can clearly improve your query executions. Just as-is! Of course, like any new feature, a proper evaluation must be done to determine the exact conditions under which your database workload operates the best. Experience shows that most workload are expected to at least run transparently under Compatibility Level 130, while leveraging new query processing functions, and new Cardinality Estimation. That said, realistically, there are always some exceptions and doing proper due diligence is an important assessment to determine how much you can benefit from these enhancements. And again, the Query Store can be of a great help in doing this work!

For now, let’s not forget, starting June 2016, Azure SQL Database will change the default Compatibility Level from 120 to 130 for newly created databases. Be aware!