Authored by Morgan Conti and Jean-Martin Zarate from Societe Generale UK, in conjunction with Eric Grenon from Microsoft

Digital technology is at the heart of Societe Generale’s mission to serve clients and to advance the economy. Every day, it serves 31 million individual clients, businesses, and institutional investors around the world by offering a wide range of advisory services and tailored financial solutions. As part of the company’s digital transformation initiative, Societe Generale is expanding the role that Azure Service Fabric plays in its environment.

This article is part of a series about customers who’ve worked closely with Microsoft and utilized Service Fabric over the last year. We explore why they chose Service Fabric and take a closer look at the design of their applications.

In this installment, we profile Societe Generale and the design and architecture of its market dataset platform, called Geysir.

As part of its company-wide digital transformation, Societe Generale is structuring IT developments as reusable building blocks exposed through APIs as services. Among these, a financial market dataset platform, code-named Geysir, provides quotes describing financial instruments to several internal clients. Geysir can be thought of as a market provider, where a market is a coherent set of financial data, such as the price of gold, the conversion rate of a dollar in euros, or the London interbank interest rate. The custom markets that Geysir provides can have different currencies, instruments, cut-offs, and other mathematical model parameters.

Several teams are using Geysir for different purposes. Traders use it to provide real-time market data to price financial products. The middle office needs snapshots of a market to value a portfolio or compute its risks and profit and loss. Financial engineers use it to retrieve past values to back-test strategies.

Geysir’s predecessor was designed to distribute a single, real-time market in a push workflow. As more internal tools began to request more quotes from this platform, the team was faced with a growing need to generate customizable markets. Although the platform was stable, it wasn’t designed to keep pace with multiple custom market quotes. That’s when the team began gathering requirements for Geysir, as a new solution with greater capacity, flexibility, and scale.

Markets as a service

Written in C#, the predecessor of Geysir was a set a microservices designed to offer an API to client applications for composing a market from different data sources with customized refresh rates. Some services were dedicated to retrieving live quotes, transforming them to the company’s internal model, and pushing the transformed model to a cache (MongoDB). Other services, at a given interval, were picking the new data from the cache, transforming this data to the clients’ format, and then publishing the result to the clients.

The team had to design a new solution to address the shortcomings of the former platform:

The team also wanted to add a set of new features, such as:

Service Fabric as a platform for microservices

To rearchitect the system, the Geysir team needed a new approach, but the developers didn’t have the time or bandwidth to gain expertise on distributed cache and all the other necessary technologies.

They consulted with another development team at Societe Generale, one which was responsible for a financial simulation platform. This platform was the main Geysir client, relying on Geysir data for its computations, and was built using Service Fabric. The simulation platform team showed the Geysir team what Service Fabric could do, and it looked like the natural solution to meet the design requirements. Service Fabric was compatible with the large, existing C# code base.

Even though there was no requirement for Geysir to use the same technology as its main client, the platforms would continue to work closely together. Both teams could benefit from sharing knowledge and components.

Without Service Fabric, the team would have to learn and deal with:

With Service Fabric, the team can create Service Fabric clusters on any virtual machines or computers running Windows Server. For a team of three who were supporting a legacy application and developing its successor, the fact that Service Fabric manages most of the complexity involved in developing and managing distributed applications was a big bonus.

For security reasons and because the application is for internal use only, the Geysir team set up an on-premises cluster of virtual machines to host the applications. The production cluster has eight large nodes in three locations, with 10 applications, 60 services, and more than 700 replicas.

It is easy to introduce a new technology but more complicated to master it, maintain it, and transmit the knowledge as employees come and go. This was especially challenging for our small team, where the departure of a person would have a big impact on the project. With Service Fabric, we leverage our C# knowledge, and people who may not know anything about it can quickly be onboarded and add value. 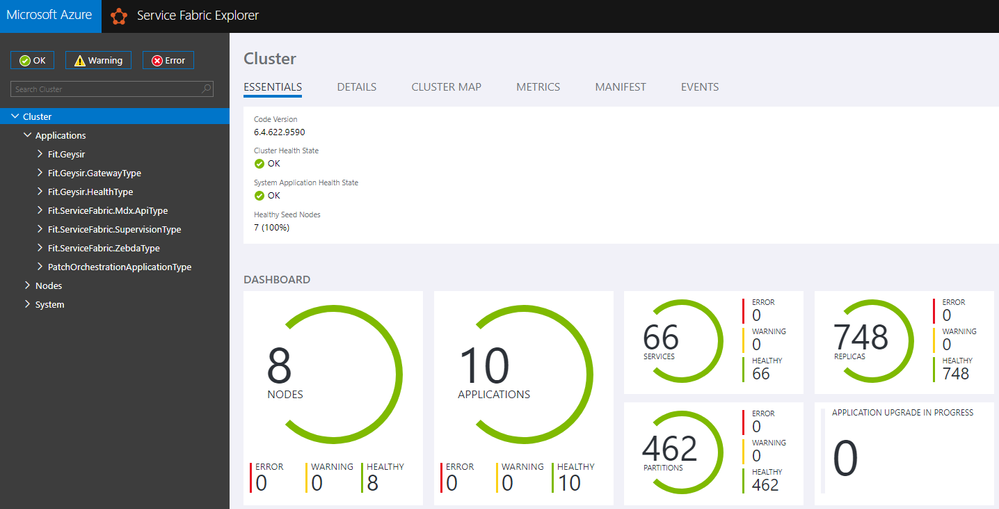 The cluster hosts the following applications:

All services in MarketApplicationType are partitioned to ensure a good distribution of the load, and most have multiple replicas or instances. 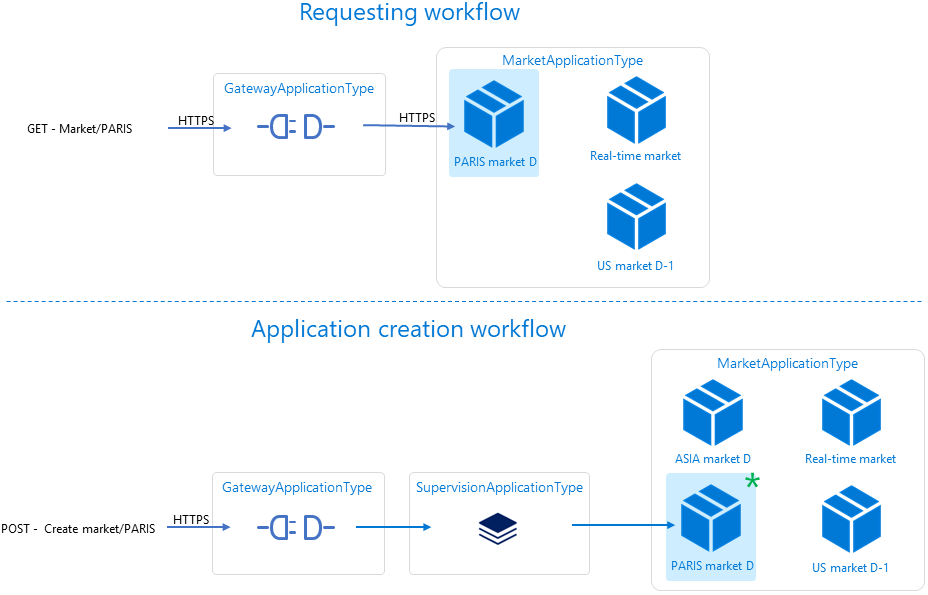 Reliable Collections are used to manage the workflow of the MarketApplicationType application, ensuring that the availability and reliability goals for Geysir are met. If a node goes down, a service managed by Service Fabric is moved, or some other event happens, the impacted service resumes from the point it left off with its previous state.

Service Fabric offers a stateful programming model available to .NET (and Java) developers via Reliable Collections. Specifically, Service Fabric provides ReliableDictionary, ReliableQueue, and ReliableConcurrentQueue classes. These classes are used when state is partitioned (for scalability), replicated (for availability), and transacted within a partition (for ACID semantics). To ensure that the workflow has a consistent state at all times, the team used a combination of the reliable dictionaries, queues, and transactions provided by Reliable Collections.

In Geysir’s architecture, only stateless services perform actions, so the MarketApplicationType has three stateful services. Their exclusive role is to store key entities and their state:

Stateless services are the engines of the application. They do not store any state information Each time a stateless service needs to interact with a state, it communicates with one of the stateful services.

As a platform, Service Fabric is completely agnostic with respect to communication between services. The Geysir team used the Reliable Services application framework to build the communication components and used the Service Remoting V2 mechanism for communication between services. At any time, a service can move across the cluster, be upgraded, or fail, so Service Fabric provides the Naming Service REST API. It keeps track of the current locations of services and associates the service names with the addresses of the currently running instances. When other services ask to communicate with a given service, Naming returns the current addresses. The Remoting stack then makes the connection appropriately. The Geysir developers appreciate that all the complexity of calls between services and partitions is hidden behind the Service Fabric client.

Each of the following stateless services performs its own task: 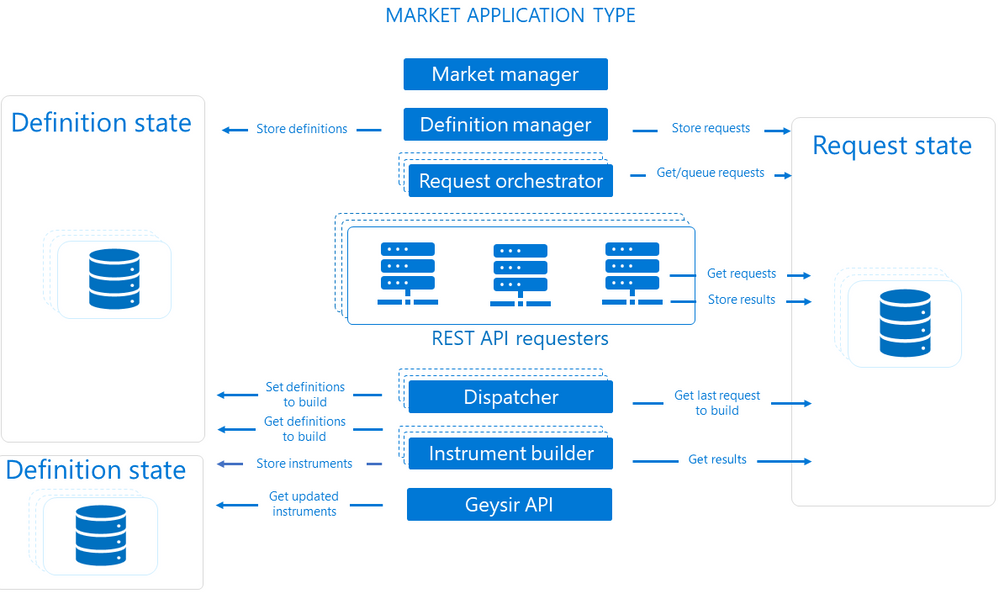 The Geysir team uses the open-source Service Fabric Explorer to monitor the cluster. It gives a great overview of the status of each application and service. To expose information from the data stored in its Reliable Collections, the team also implemented a custom monitoring service. This service exposes KPIs, such as the size of the queues in the stateful services (for example, the number of requests that need to be processed, are being processed, and have been processed). Having these KPIs allows the team to analyze the state of the data in depth and to improve the performance of its code based on both a service-level and data-level overview.

These metrics allowed the team to make several improvements to Geysir:

The Geysir team has several planned developments to further improve the application:

This project, developed in collaboration with Microsoft, is a milestone in Societe Generale’s digital transformation agenda, in which moving to the public cloud is a priority.

For a team of three who must support a legacy application and develop its successor, the fact that Service Fabric manages most of the complexity involved in developing and managing distributed applications is a big bonus.